Funeral Services will be held at 11:00 A.M. Thursday, October 20, 2005 at Big Canoe Lutheran Church, rural Decorah, by Rev. David Andreae. Burial will be in the church cemetery with Full Military Honors by Helof-Holm V.F.W. Post No. 1977, Bernatz-Symonds American Legion Post No. 163, D.A.V. Hamre-Giesen Chapter No. 8 and AMVETS Post No. 96 of Decorah.

Friends may call from 4:00-7:00 P.M. Wednesday, October 19, 2005 at Fjelstul Funeral Home in Decorah and an hour prior to the services on Thursday at the church.

Jerome was united in marriage to Kathryn T. Arneson on April 7, 1943 at Big Canoe Lutheran Church, rural Decorah. To this union, five children were born: Jerome, Joseph, Diane, Donna, Wanda and in 1953 the couple adopted a son, Kavin.

Jerome worked as a farm laborer for several farmers before being drafted for World War II. He served in the US Navy from October 27, 1941 until his honorable discharge on October 10, 1945. Jerome and Kathryn purchased a farm in the Sattre area in 1944 where they farmed until Jerome had to quit for medical reasons in 1956. They then moved into Decorah and Jerome worked for Standard Appliance and later at Varners Decorah Implement and Truck where he sold farm equipment. Jerome became the Winneshiek County Veterans Affairs and County Relief Director on May 1, 1971, serving until his retirement in 1988. In 2000, Jerome was recognized for his military service during World War II and was awarded a High School Diploma by the Mabel-Canton High School.

He was a longtime active member of Big Canoe Lutheran Church; and a member of the V.F.W. and American Legion Posts and the Decorah Elks Club.

Jerome was a great outdoorsman and enjoyed hunting. He loved auctions and garage sales and was always on the lookout for a bargain. He was well informed and liked reading several newspapers and attending the coffee club at 10 A.M. and 3 P.M. everyday.

He was preceded in death by his parents, four sons and daughters in infancy, Jerome, Joseph, Diane and Donna Kroshus and a son, Kavin Michael Kroshus on October 18, 2000. 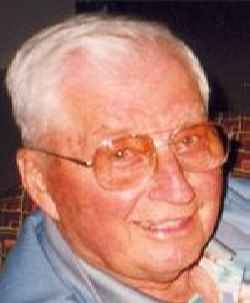