Beulah Iola Grotegut was born Feb. 5, 1918 to Herman and Josephine (Kittelson) Hendrickson on a homestead near Cando, N.D. She was baptized in her home and later confirmed at Hesper Lutheran Church in Hesper, near her familys farm. She attended country school there through the 8th grade and high school in Mable, Minn.

Tragedy struck her family in 1937 when her brother Glenwyn was killed in a farming accident and her mother died in 1938. She moved to Decorah, with her father and worked at a factory supporting World War II efforts and later for McMasters and Headington optometry office. She was united in marriage to Calvin H. Grotegut on Feb. 18, 1951 at the Little Brown Church in the Vale in Nashua. This union was blessed with one daughter Brenda.

After their marriage, they farmed in rural Burr Oak, until 1956 when they moved to Decorah. Beulah worked for Montgomery Ward and later Decorah Community Schools as a school food service worker. Her organizational skills led her to a position as supervisor for the school districts hot lunch program from which she retired in 1983. Beulah and Cal moved to Albert Lea, Minnesota in April, 1994 to enjoy closeness to family. After celebrating 50 years of marriage, Cal passed away September 12, 2001. Beulah continued living in their home until January, 2011 when she moved to the New Richland Care Center, New Richland, Minn.

Beulah is survived by her daughter and son-in-law Brenda and David Van Fossen and one grandson, Matthew Van Fossen, all of Albert Lea, Minn., and by several cousins. She also was preceded in death by her father in 1980.

Funeral services were Saturday, Feb. 12, at 1 p.m. at Fjelstul Funeral Home, Decorah, with the Rev. David H. Andreae officiating. Organist was Connie Bolson. Congregational hymns were What A Friend We Have In Jesus and Amazing Grace. Casket bearers were Randy Koepp, Michael Molumby, David Van Fossen and Matthew Van Fossen. Interment was at the Big Canoe Lutheran Cemetery, Decorah. Fjelstul Funeral Home was in charge of arrangements.

Transcribed from a newspaper clipping provided by Janice Sowers 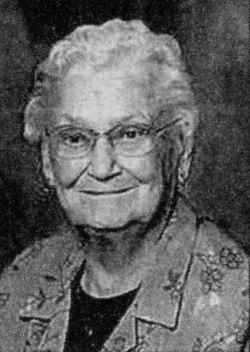