Partrick Vocke, 18, son of Mr. and Mrs. Frank Vocke of Cantril drowned in a farm pond a mile east of Milton at 8 p.m. Saturday.

Vocke, Steve Nelson and Chester Creswick were all in the pond when Vocke reportedly suffered a cramp and went under the surface of the water and his companions were not able to rescue him.

They had been using inner-tubes in the pond. Vocke and Creswick new how to swim but Nelson did not swim.

Van Buren County Deputy Sheriff Steve DeHart assisted Mark Martin, Dennis Calhoun, Francis Boyd and others in the rescue operations and the body was recovered in seven feet of water about half an hour after the drowning.

The pond is owned by Sam Nelson, grandfather of the Nelson youth.

Funeral for Patrick Neal Vocke, 18, who drowned Saturday, May 20, was held at 2 p.m. Tuesday at the Cantril Christian Church. The Rev. Gerald Caughron officiated. Burial was in Maple Grove Cemetery. Wellborn Funeral Home, Milton, was in charge of arrangements.

The youth was the son of Frank and Mildred Isbrandtsen Vocke, and was born July 11, 1953, at Loup City, Nebr. He graduated from Fox Valley high school in 1971 and had been working on the farm with his father since then. He had planned to enter military service this coming weekend. 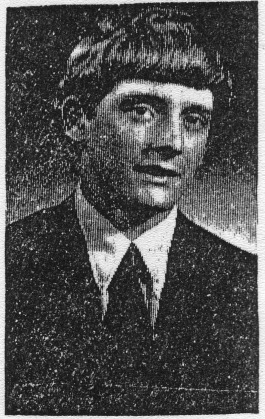