The 12 Sioux County farms designated Century Farms in 1987 include:

Donley Korver, who farms near Alton. The farm has been in the Korver family since 1885.

[Accompanied by a photo of Don and Maralyn Korver and sons.]

The farm of Donley J. Korver was honored as a Century Farm at ceremonies held Tuesday, August 25, 1987 at the Iowa State Fair. The award was presented by Secretary of Agriculture, Dale M. Cochran and Darryl Jahn, Iowa Farm Bureau. 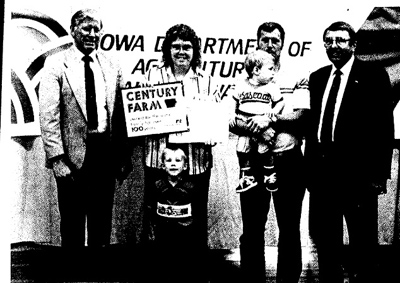