When Jacob F. Geyer emigrated to the United States in 1886, he really had no intention of settling in Iowa, but a chance conversation along the way changed his mind. As a result, for the last 100 years there have been Gayers in the Rock Valley area, some of them on the same farm Jacob settled on.

The Gayer farm is five miles south of Rock Valley and a little bit west. Now it is an impressive acreage with several large buildings, a good-sized remodelled house, and huge, beautiful trees. When Jacob first came, however, there was none of this.

Jacob made the trip with his wife, Johanna, and six of his eight children, including Fred, Gottlob and Charlie. Jacob was a blacksmith in the small German community of Illingen. The Gayers intended to settle in Missouri, where Johanna had relatives, but during the trip they met a Mr. Adler from Le Mars, who expounded at length on the wonderful soil of the northwest Iowa area.

Adler convinced Jacob, who, on April 17, 1886, acquired 100 acres in Plato Township. The familys first actions were to dig a well and put up a barn, one end of which was also used as a dwelling. Later that year a two-story, four-room home was erected on the homestead. That original structure is still part of the present house.

Son Charlie eventually took a farm of his own, but Fred and Gottlob stayed on the home place and farmed it together. Three of Freds 10 children were born on the place before Fred moved to another farm to the north. Freds wife, still living at age 100, stays in Rock Valley now.

Left on his own, Gottlob hired a series of housekeepers. One of them, Anna Haman, especially caught his interest, and in 1920 he married her. Gottlob and Anna had seven children: Lloyd, Bernard, Bernice, Marion, Berdina, Rose and Joyce. Lloyd and Bernard presently are farming the original farm under the name Gayer Brothers.

Hopefully, the Gayer place will pass to a fourth generation of Gayers. Bernard has three sons, Terry, Tom and David, and a daughter, Lori. One of them will certainly keep the family place, if possible.

That capsule history of the Gayer family has come to light because the Gayer family, especially Bernards wife Delores, have taken an interest. Since January of this year they have been doing research on the family and have been planning a celebration.

The Gayer farm has been officially designated a Century Farm by the state of Iowa, in commemoration of having been in the same family for 100 years. The official celebration will be on Sunday, August 16, and what a celebration it will be. A church service will be held on the lawn at 11:00 that morning, followed by a potluck dinner and then, from 2:30 to 5:00 p.m. there will be an open house for friends.

Even if no friends were to come, there will be a large crowd. Gayers from some 18 states, as well as Germany, will be on hand to participate, wearing color-coded T-shirts to let everyone know which Gayer branch they belong to. Already 260 of the T-shirts have been ordered by family members. Also available will be commemorative coffee mugs. A German flag and a family pennant will fly over the farm on that day. A fifth-generation Gayer will be baptised on the farm that day, the child of a niece of Bernard and Lloyd.

It will be a big party. Its a big event. One has to wonder, if Jacob were here now, what he would think of the family he began. Given the obvious display of family pride, he would have to be pleased.

[The same article, with the photo of Jacob and Johanna Gayer and family, was published in the Hawarden Independent, August 7, 1986, p. 3. It adds this paragraph:
Many of the Gayer generation is living in the Hawarden-Rock Valley area. Several children of Fred Gayer presently living in the Hawarden area include Mrs. Roy (Minnie) Bauder, Mrs. Hayes (Ann) Wasser and Mrs. Edwin (Louise) Heuer.]

[A similar article, with the three photos, was published in the Sioux Center News, August 13, 1986, p. 3. It adds this information:
Delores Gayer is expecting between 250 to 300 relatives to attend the centennial celebration. She points out there are more than 500 descendants of Jacob Gayer, who live in the United States, and among this number are 250 to 300 of the immediate family. There are 59 living descendants in Oklahoma alone. Gayer descendants from that state, as well as those from Florida, Texas, North Carolina and 14 other states, are expected to attend. There will even be one relative from Germany. Leisa Eiss, a grand-daughter of Martina Gayer (daughter of Jacob and Johanna), who was married when her parents, Jacob and Johanna, decided to come to the United States.] 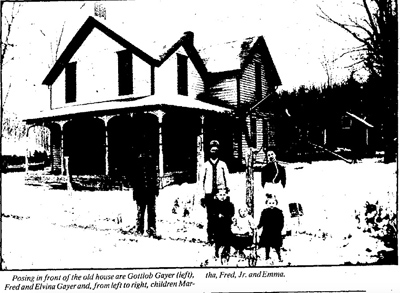