Photograph of a Century Farm certificate presentation, with the caption: The farm of Al Jonas was honored as a Century Farm at ceremonies held Wednesday, Aug. 22, at the Iowa State Fair.

[It appears as though this was actually the farm of Brad Jonas, per the articles below.]

A lot of ground has been turned in the past 100 years at the Jonas farm near Carnes. After months of planning, the family grounds shook Saturday night with the sounds of 600 visitors and a live band. It was a celebration to commemorate 100 years of Jonas ownership of the land three and a half miles south of Alton.

Joseph Jonas came from Germany and came to Plummers Settlement, Council Bluffs, where he stayed for two years. They came to the prairie they now call home when son Peter was two years old. Joseph bought 160 acres from the Des Moines Valley Railroad Co. Originally there were just cattle and a little ground was broken. Eventually the 160-acre farm grew to its present 419 acres.

Peter took the farm over from Joseph, and Bud followed his father. Last November Bud turned 62 and he turned the farm over to his son Brad. Brad says he continues to paint and do some repair but not much more.

The farm has always had cattle and hogs. Chickens were raised until 1950. Corn and oats were the staple crops with soybeans and alfalfa added to the rotation in recent years. The land has been good, thats how weve been able to hang on, Bud said. The only real trouble he remembers was the flood of 1953.

The farm has been the site of three tragedies. One of Josephs sons and a neighbor boy were drowned in the Floyd River and another son was hit by a train at age three. A carpenter who was helping thrash one summer jumped up from his lunch and decided to race a train over the tracks with a hay rack. The horses made it but he didnt.

Theres also been a lot of good times. Seven of Josephs children were born on the farm and 10 of Petes. Bud figures there were at least six weddings here. One of the very best of times, he says, was Saturday night. We had a barrel of fun.

Back in January Brads wife Jean began putting the plans together and sent out invitations. In May she filled in with details. Family members were invited to camp out for three days. A spark for the celebration was Altons centennial celebration last summer.

Cousins gathered who hadnt been together for 21 years. At that time they were children. Now they were married and had children of their own. The big event was a flag raising Saturday night by the Alton American Legion Post. Taking part in the ceremony was Mrs. George Keilen, a niece of Joseph. Twenty one neighbors from the Carnes area got together and contributed to a plaque made by Bill Geurink.

It is estimated about 600 people attended Saturday. They were parked around the yard and in fields across Hwy. 60 from the farm. The guests kept occupied by consuming over 215 lbs. of pork, enough beans to fuel some long distance trips home and 208 gallons of beer. Guests came from California, Pennsylvania, Florida, Wyoming, Kansas, Missouri, Minnesota, Illinois, Texas and South Dakota.

(The article is accompanied by a photograph of the Brad Jonas family outside the farm house.) 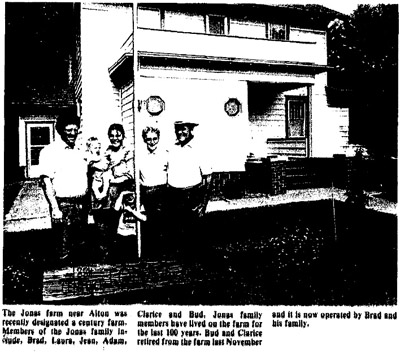