Farm Escapes Natural Disasters, Other Incidents for Over 100 Years
by Tammi Alborn

Untouched by natural disasters or serious incidents, the Irwin Vermeer farm has stood the test of time for the past 101 years. On October 22, 1982, the Vermeer homeplace celebrated its 100th year anniversary. Upon reaching that landmark, the Vermeers applied with the Sioux County Farm Bureau to be designated as a Century Farm. The only qualifications the forms required were that the farm indeed be 100 years old and that at least 40 acres of the original homestead still be owned by a family member either through blood marriage, adoption or the extended family.

This year Sioux County had 13 farms that were eligible for recognition at the Iowa State Fair on Aug. 17. The day was a scorcher, reaching 108 degrees, but the three-hour presentation was bearable as the Iowa Secretary of Agriculture Robert Lounsberry and the Iowa State Farm Bureau President Dean Kleckner awarded nearly 150 farmers from all over Iowa with plaques and certificates.

In 1882, Irwins grandfather moved to the farm one mile south of Sioux Center and three-quarters of a mile east. His grandfather, originally from Wisconsin, expanded his claim to two sections as his family also grew. Irwins father was the youngest of six boys so he remained on the homeplace and farmed until he suddenly died from a ruptured appendix. Irwin at the time of his fathers death was eight years old and the oldest son. His mother, who survived her husband, moved to town with her 11 children (the youngest was three months old) while Irwin attended school.

Between the ages of 8 and 16, Irwin was a student; but once he was 16, he returned to the farm as the head of the household and began to farm. This fall harvest marks his 42nd crop.

The original house was removed and rebuilt in 1925. The only original structures that still remain on the farm to remind the Vermeers of days gone by are two barns that still stand with their original frames.

Irwin and his wife, Ellen, have six children; and, as they explained, can only hope that the farm will remain in the family. The Vermeers are cattlefeeders and have always been so. They farm 320 acres of land which feeds their 300 to 400 cattle herd.

The first year for the Century Farm recognition began in 1976; and, since that time nearly 3,300 Iowa farmers, like the Vermeers, have had their farms designated as Century Farms. Vermeer plans to have his plaque framed, mounted and posted for passersby to enjoy, 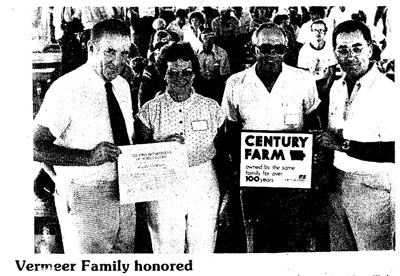