An article in the Sioux County Index Reporter, October 20, 1983, about the Vermeer familys Century Farm (posted separately) says that in 1983 Sioux County had 13 farms that were eligible for Century Farm recognition. No list of these farms has been found in area newspapers.

Presentation ceremony photo, with the caption:

The farm of Walter A. Vander Wilt was honored as a Century Farm at ceremonies held Wednesday, August 17, 1983 at the Iowa State Fair. The award was presented by Secretary of Agriculture, Robert Lounsberry and Dean Kleckner, Iowa Farm Bureau.

From the Sioux County Capital Democrat, June 16, 1983, p. 21:
(The article below does not say explicitly that these are Century Farms, but at least one is 100 years old.)

Farming aint what she used to benot around Alton anyway. As few as 40-45 years ago, farmers didnt measure horsepower by the hundreds. Out in the fields they had one or two at their disposal. They werent anonymous, whirling pieces of steelthey were warm blooded beasts who might need coaxing or cursing.

Among the farmers who operated in the simpler, horse-drawn farming days were the Scholten family, Henry Krogman and many more still living on their farm places in the Alton area. Both farms are now rented out though they both continue to do some work. Theres been a lot of changes in the last 50 years, John Scholten says.

Krogman put down his roots on a farm just east of Alton after getting married. In 1936 when he moved there, he didnt have a tractor. The farm where he now owns had belonged to C. W. Hentges, his wifes father.

Many in the area were suffering under the burden of having bought land in 1918 for $400 per acre. At the time a farmer could get into farming with a couple of horses, a plow and a cultivator. When I started I only had horses, Krogman said. Everybody had horses. His one row cultivator took two horses. There were a few two-row cultivators that took three horses.

Before starting out on his own, Krogman worked for his father as a hired man. He earned $35 a month in 1935-36. Thats all anybody got. His father had some of the early tractors. They were used for plowing and disking but didnt have the power to cultivate. It was 1940 before Krogman got his first tractor, a used Farmall. He got a few implements with it but the tractor couldnt handle all of his chores. "I still had horses until the late 1940s. Gradually I bought machinery I could use the tractor for. In 1940 he bought his first new tractor. It was an International C and included a mounted corn planter, plow and cultivator. Ive got it all yet, I havent used it for years.

Krogman says the horses were much slower and the tractors had more power. If you could plant 20 acres in a day, you were doing great. You had to have a good team for that. At the time horses cost $100-$125 and a new tractor was $700-$800. For horses farmers raised their own feed. Gas didnt cost much. Neither did repairs[,] and implements cost about the same where[i.e., whether] it was for a horse or tractor. Gas was about 13-14 cents per gallon he remembers.

The Scholtens made the switch to tractors about the same time as Krogman. While Krogmans family was getting established in farming in Remsen in the late 19th century, the Scholtens had already gotten a start northeast of Alton. In the early 1800 a Scholten uncle lived near their current home place. The Scholtens helped break land south of there and the entire family came from Chicago in about 1883, living in a shack. A few years earlier they had come from Holland.

A barn was the first priority for a farmer in those days and the family built one in 1884. They also lived there until a house was built the next year. Through the years the farm has stayed in the family. Though they only have some pasture ground, cattle and a big garden now, Gerald, John, Margaret and Minnie Scholten remain on the home place.

We picked corn by hand yet and all such, John said of the days when he and Gerald were youngsters. It was quite a job for one man. That was when there was open pollinating corn and it didnt pick easy. A farmer would be equipped with a pin in his hand or a hook on his wrist. Without good gloves, his hands would wear through, John said. Hed have a team and wagon for loading the corn. Going out in the morning, hed get soaking wet, walking through the corn. With quarter mile rows, he might succeed in doing six to eight rows in a day. That would mean staying out until dinner time. When he got home there were always chores after dinner.

The farms of the day were diversified. Corn and oats were major crops but there was also hay for feed. Farmers raised beef cattle, dairy cattle, hogs, chickens and had a few work and driving horses. Now its all one thing, the Scholtens said of todays specialized farms.

In those early days a dump rake was used in the hay fields. There might have been a carrier to help move the hay in the barn but all the hay from the field had to be pitched onto a wagon. When the side rake came it helped a lot. Then we went to bailers.

The amount of land a farmer could manage was restricted by time. He could have only so many dairy cattle because of the time it took to milk them by hand. Working the fields took much more time. Hitching the horses took time, John said.

In those days no passes were made over a field spreading processed chemical fertilizers, herbicides and pesticides. Instead of fertilizing a farmer would rotate in clover every few years and then plow it into the ground after it had matured. The ground wasnt worked all at once as it is now. Today the contours of the ground have often been changed or there has been work done to ease drainage. There used to be sloughs you couldnt work in the spring, John said.

In the fall, the crops were shocked and stacked. On many farms that was going on until the early 1950s. Since 1940, the combine had started to make inroads. I remember it, Krogman said. After youd cut the grain, youd put it up in shocks. There were six bundled to a shock. Youd make a circle and stack it to a peak so it would shed rain. There was a trick to it.

Once the grain was dry enough, it could be threshed. A huge machine separated the grain from the stocks[i.e., stalks]. Today combines do many operations at once. Throughout the area there were ringsgroups of five, six or seven farmers who owned a steam powered tractor together and moved in crews from farm to farm at threshing time. When I was 15 years old I was hauling bundles muself. We had to load alone, a hay rack was pulled by horses. Wed wear goggles, that was a dirty job.

Farm women in those days didnt have it easy either. At threshing time there were meals to fix for all of the workers. It was the farm women who kept the family garden and who did the canning so there was enough food through the year. There were no water systems so that would mean work at the pump.

The heating systems of the time were tended by the women. They would bring coal, wood or cobs into the house. During the day youd try to get in what youd use for the evening to try and keep the furnace going, Margaret Scholten said. There was an ice box then and it would take a trip into town to get a large block of ice for it. While the men were in the field, Wed stay home and take care of everything, the chickens and stuff like that. In that time there wasnt a need for a lawn mower, the chickens kept the grass in the yard down.

Through the years the farmers suffered good and bad years. The very earliest settlers here suffered grasshopper infestations and there were periodic drought conditions. In 1934 it was so dusty you couldnt even see the sun some days, even when it was clear, Krogman said. The ditches had two or three feet of dust in them. In May of 1934 it was 103-105 degrees and by June all the pastures were brown.

In 1936 it was worse yet but it wasnt so dusty. July was so hot, Krogman said. On July 4 that year the corn was already four feet high, Quite tall but the temperature reached 111 degrees. It was real tough. The sun continued to beat down and in the fall Henry harvested 100 bushels off of 100 acres, getting all the corn he harvested from the draws. We didnt raise much, Gerald Scholten said.

Krogman said there wasnt anything like that again though 1956 was quite dry. He said 1976 was a little dry but, Weve really been fortunate the last five or six years. He thinks 1951 may have been among the wettest years but it didnt compare to this spring. Ive never seen so many wet spots in the fields. I never saw anything like it and probably never will again.

In the old days farmers were much more self sufficient than todays specialized farmers though they didnt raise nearly as much. The diversity helped deal with problems in any one area of farming. The farmer fed livestock from his own fields and ate his own pork and beef. He had a garden and the milk and eggs came from his own farm. Youd help yourself with what you had on hand, John Scholten said. What spare cattle or hogs we had, we fed out. We sold the extra. We separated the cream from the milk and sold it, he said. The chickens didnt lay eggs like today but what we had left wed trade for groceries.

In those simpler days many decisions were less critical. Today a wrong move can cost tens of thousands. We never handled such a lot of money, John Scholten said of the old days. The 1930s was a time when overalls cost 75 cents and a pair of day shoes were $1.95. Good cattle might have brought $15-$20.

Alton area farmers have seen some tough times. Most wouldnt have changed places though. Farming is what I always did, Scholten said. Its still the best place to be. 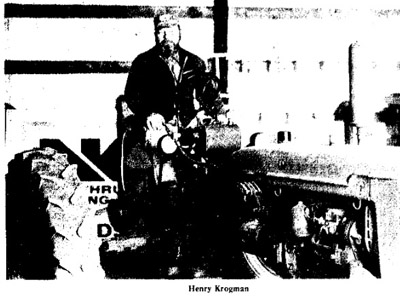