The Lambert (Jack) Mouw farm has been in the family for at least four generations, and even though its been wholly changed since 1877, when Jacks great-grandfather bought it, the farm still has its ties to the past.

Jack and Arlene will be attending a Century Farm awards program at the Iowa State Fair Thursday, Aug. 23. The awards honor Iowa farm families who have owned the same Iowa land for 100 years or more. The Mouws wanted to attend because they thought it would be a once-in-a-lifetime thing.

Jack was born just across the road from the family farm, but when his dad took over the farm, he and his grandfather simply switched places. The oldest buildings on the farm are the barn and part of the house, both dating from 1913. [The] Mouws hadnt realized how old that part of the house was until they were tearing down a screen porch last year and found two pieces of wood somewhere in the roof line that identified the workmen who built it. One of the pieces states This building was put up by J. Walburg and gang May, June and July of 1913. The other says, This ceiling was put on by B VD Aarde Jr. and B. Jongewaard of Orange City, Iowa, July 7, 1913. If this job was not done right call on us for better work.

Much of the historic flavor of the farm is the obvious result of Jacks and Arlenes sense of pride in their roots. Besides the many antiques they have restored  both boughten and inherited  as a hobby they both enjoy, the Mouws have used things that mean a lot to them by turning them into unique reminders of the past.

For instance, one wall of the basement is sided with wood from a machine shed dating from the 1800s that Jack can remember. Another wall is sided with sheeting from underneath the shingles on the old porch, and another with sheeting from under siding on the house. The old windmill standing in front of the barn was originally built at the place across the road, but it wasnt being used anymore, so Jack had it moved to the farmyard so they could see it, too.

Theres a real horse buggy that Jack bought in Hospers about 15 years ago stored in their garage. He took it apart piece by piece and refinished it down in the basement, after which they rode in it in the 1970 Tulip Time parades.

Their favorite project is a chandelier made from a wagon-wheel. The wheel was on a wagon that Jacks grandfather used to sow oats with. It means a lot to Arlene because it was something here originally, and were still putting it to use.

Jack has some livestock, but likes crop farming best because its seasonal work that gives you more leisure time. Jack and Arlene spend their leisure time working on hobbies, one of which is refinishing antique furniture. We like it because its part of the history, I guess, Arlene said. Jack also collects guns, which he keeps in a vault he made in the basement, and wooden duck decoys, which he started only recently.

The Mouws have three daughters  Lea, 21, who is married and living in Brandon, So. Dak., Nova, 18, a freshman at Northwestern College, and Kay, 13. The farm means a lot to them, as it does to their parents.

Jack would like to see it stay in the family, but time will tell, I guess. Asked which of his daughters would inherit the farm, he said with a laugh, The first one to marry a farmer!

(The article is accompanied by two photographs, one of Jack and Arlene Mouw, and one of the farmyard.) 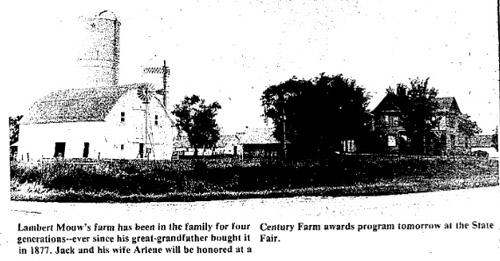