This family story was taken from the Sioux Center Centennial Book of 1991 page 574. It was submitted to the book by Gertrude E. Wissink and Transcribed with additions for this Bios by Wilma J. Vande Berg.

Somewhere in the province of Gelderland in the Netherland there is a little town, walled and ancient called Elburg. In this inauspicious community there lived a family which bore the name of Van Putten.

Family predecessor, Gerrit Willem Van Putten born 1796 was married to Annastje Potgeiter born 1797, to whom was born a son Albert on March 26, 1825. Albert married Gerritje Hofman born Nov 21, 1823 and to this union were born four children. Gerrit Willem born July 11, 1852, Annetje bon Jan 4, 1855 who was Mrs. Hendrik Van Kerkoff,; Aaltje born Apr 7, 1859 who was Mrs. Douwe Kykstra; Dena born Jan 2, 1961 who was Mrs. George Oelrich. They lived within the town limits and went to work in the fields surrounding the town. Gerrit Willem married Evertje Vande Werfhorst born Oct 19, 1852 on Dec 19, 1878. Her name originally was Wefhorst until 1854 when it was changed to Vander Werfhorst legally.

At some time, presumably in the year 1883 Gerrit Willem decided to seek a new life in a new land America so he, his wife and 2 children Grietje born Oct 15, 1879 and Evert born Jan 19, 1881 and three sisters sailed from Holland landing in New York City. An amusing incident told by Gerrit Willem occurred in New York City. Upon landing they were hungry and went to a restaurant thinking he saw a large pancake, the farm cooks used to make large thick ones in Holland, so ordered one for breakfast. He promptly proceeded to eat it. It was not a pancake but a whole apple pie! They traveled across half the country to establish a new home in Sioux County Iowa.

Gerrit Van Puttens three sisters married men from the Orange City area. There were many hardships in those pioneering days. A tornado touched down near their home, survival was a day to day struggle, little food, cold drafty homes, grasshoppers, etc. but the family was a family full of fun, enjoyed singing in the evenings around the old organ. One story told was when they were roughhousing and Gerrit became upset. He put his paper down and scold them when one of the boys threw a spoonful of buttermilk pop at one of the other kids by caught him right in the eye. Even his wife had to laugh which was quite unusual because she always was quite a stern person. She never was completely happy in America because none of her family came over and she never saw any of them again.

Gerrit Van Putten at one time owned over a thousand acres of land but because he had cosigned a note for someone who could not make the payments he lost all but 200 acres as he had to help meet the demand of the note. Gerrit Willem was a bit on the small side but walked very erect and had the bearing of a soldier. He did serve in the Dutch army for several years before he was married. He wasnt an educated man by the standers of today but did a lot of reading ,especially in the field of Theology. He was a long time member of the consistory of the 1st Reformed Church. He would have many deep theological discussions with neighbors and fellow church members. He was a deeply religious man and his life was centered around church and farming. All the children were good singers and participated in church choirs. Willemina and Allie sang in any many duets in church. Evertje, the mother, was a constant knitter and made many pairs of socks, scarfs for her grandchildren. Grandpa would criticize her for her continual knitting. She in turn would tell him what a dirty habit her tobacco shewing was. They could just be at each other without getting angry. The love and commitment in those day was very deep and marriage vows were until death due us part. Evertje passed away Dec 11, 1923 and Gerrit Willem Feb 1, 1929.

All the Van Puttens remained in the area so there were many family reunions in the Rock Rapids park where the children would to swimming in the Rock River and ate a lot of good food because the Van Puttens were good cooks and loved to eat. The reason the gatherings were held in Rock Rapids was the oldest girl Grietje married Gerrit Jongerius and he never drove a car so and they had 13 children so to Rock Raids everyone would go for a fun day. It was thru these gatherings that the Van Putten clan became a very close knit family. Even today the offspring still get together.

OBITUARY of GERRIT WILLEM VAN PUTTEN
Source: Alton Democrat (2-22-1929)
Born: July 11, 1852
Died: February 16, 1929
GERRIT VAN PUTTEN EARLY RESIDENT
DIED SATURDAY AT SHELDON HOME LEAVES NINE CHILDREN
Sioux Center friends were shocked to learn Saturday evening of the death of Mr. Gerrit W. Van Putten, longtime resident of this vicinity, who died from the effects of a stroke suffered the previous night.
He had been living at the Holland Home in Sheldon for only three months and apparently had been in good health and was enjoying life there. He was 76 years old last July.
The nine children surviving have the sympathy of the community in the passing of their father, who was ever devoted to their welfare. They are Mrs. Gerrit Jongerius of Steen, Minnesota; Ed Van Putten, Sioux Center; Mrs. Pleun De Zeeuw, Sioux Center; Mrs. Richard Dykstra, Rock Valley; Mrs. Henry Mouw, Mrs. Albert De Pree, Albert Van Putten, Mrs. Henry Huitink and Mrs. Henry Wissink, all of Sioux Center.
Mr. Van Putten was born in the Netherlands and lived there until several years after his marriage to Evertje Van De Werfhorst. Mr. and Mrs. Van Putten and two older children came to this country some forty years ago.
They farmed in this vicinity for thirty-five years and moved to town about eight years ago. Mrs. Van Putten passed away five years ago.
Besides his children he is survived by two sisters, Mrs. George Oelrich of Orange City and Mrs. Douwe Dykstra of Hull.
He was a faithful member of the First Reformed Church and served as elder for many years.
Although a few months before his death he had removed from this community, many friends will honor the memory of his fine and noble character.
Funeral services were held at the Home in Sheldon Monday afternoon and on Tuesday afternoon Reverend Lubbers had charge of services in the local First Reformed Church. 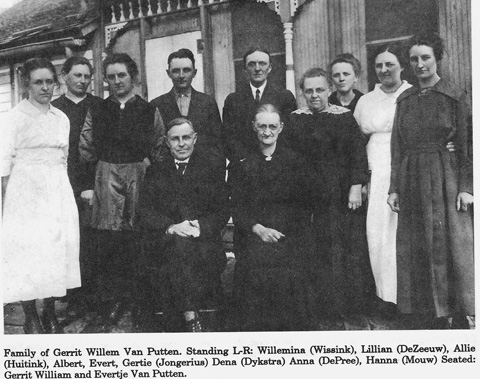