This family story was taken from the Sioux Center Centennial book of 1919 pate 591 & 592. It was submitted by Winona Jansen. This story was transcribed for this Bios by Wilma J Vande Berg and some research notes were added.
Van Velzen, Cornelius 1854 and Antje Van Egmond family.

In 1920 they and Marrtje, William, and Cornelia emigrated to the United States to join John, Pet, Joe and Marie who had come several years earlier. They arrived in New York on Sunday night by boat. They had to stay on board the ship until Thursday when they were processed at Ellis Island. They came directly to Sioux Center and lived with John and sister Marie Van Oosbree for several months until they found work and housing.

He became janitor of the First Christian Reformed Church until his death on Jan 4, 1939. Antje passed away April 28, 1934. Both are buried in Memorial Cemetery in Sioux Center.

The picture was taken on Nov 16 1933 at which time they were celebrating their 40th wedding anniversary. This house is still standing in 1989 and the front remains the same. It is located at 2nd Ave. N. E. They also lived in the house that was moved this year, to the Heritage Village in the northeast part of Sioux Center.

Mr. Cornelis Van Velzen, 84 years of age, died Wednesday evening [Jan. 4] at the Hull hospital following the auto collision which occured north of Sioux Center.
Mr. Van Velzen was born in Sassenheim, Netherlands on May 27th, 1854. He and his family came to America 18 years ago settling in Sioux Center. He was married to Miss Antje Van Egmond at Rhynsburg, Netherlands on Nov. 16, 1893. Ten children were born to them, two of whom have preceded him in death, one daughter Maria, 8 months old and one son Cornelis, three years of age. Mrs. Van Velzen passed away April 28, 1934.
The surviving children are Dirk, who lives in the Netherlands, John of Sioux Falls, S.D., Peter of Sioux Falls, S. Dak., Joe of Boyden, Ia., Mrs. John Van Oosbree of Sioux Center, Ia., William of Sioux Center, Ia., Mrs. Adolph Eshuis of Sioux Center, Ia., and Mrs. Henry Jansen of Rock Valley, Ia. He also leaves 37 grandchildren and one great grandchild.
Funeral services were held Saturday, Jan. 7, 1939 at 1:00 o'clock from the Van Oosbree residence and at 1:30 o'clock from the First Christian Ref. Church. The Rev. Mr. John M. Dykstra officiated, assisted by Rev. VerBrugge of Sioux Falls. Interment was in the Sioux Center cemetery.
Prior to his retirement, Mr. Van Velzen was janitor of the First Christian Reformed Church for 16 years. He was a man of pleasing personality and highly respected by a large circle of friends. He was blest with a rugged constitution.
Source: Sioux Center News, January 12, 1939.
This obituary spells his name Cornelis, but all other obituaries and news notes and articles spell it Cornelius.
* * * * * * * * * *
A similar obituary in the Alton Democrat (Jan. 13, 1930) ends with this comment:
Everyone loved Grandfather Van Velzen for he was always cheery and full of fun. His years had no effect on his youthful attitude toward life and he will be greatly missed in the church, on the street and in our homes.
* * * * * * * * * *
Here is an article about the auto crash from the Sioux County Capital, Jan. 5, 1939:
Auto Crash Injures Seven Monday Night
Cornelius Van Velzen of Sioux Center in Critical Condition
Two cars meeting head on north of Sioux Center Monday night, brought painful breaks and cuts to six of the occupants in the cars and broke the ribs and badly cut up an eight-four year old grandfather. The injured in the accident which occurred two miles north of the town are: Cornelius Van Velzen, 84 years old of Sioux Center, his daughter and son-in-law Mr. and Mrs. John E. Van Oosbree, their son Antonie, all of Sioux Center and the occupants of the Van Osbree car, and Cornelius Vande Weerd, Herman Druyvestein, Homer Stanton of Rock Valley who were riding in the Vande Weerd car.
Mr. Van Velzen suffered broken ribs, one of which punctured a lung and severe cuts and shock. He is given but slight chance of recovering although he was reportedly better Wednesday night. John Van Oosbree received a fractured bone in his upper arm and broken ribs. Mrs. Van Oosbree has a fractured bone in the upper arm and severe cuts which necessitated forty stitches to close. Their son Antonie suffered a broken elbow and a broken foot (bone in the heel). Son Johnnie, who was also riding in the Van Oosbree car, escaped with a good shaking. The occupants of the Van Oosbree car were treated in Sioux Center by Dr. Wm. Maris and taken to the Hull hospital for care.
The three boys from Rock Valley in the Vande Weerd car were taken to Dr. Carl Oelrich in Sioux Center for treatment and two of them are still under his care. Cornelius Vande Weerd has an injured leg and lacerated upper lip. Herman Druyvestein has a fractured right arm and Homer Stanton suffered minor bruises from the collision.
Both the cars in the accident were completely wrecked. It is surprising that immediate death did not result from the head on crash and Mr. Van Velzen's condition is considered critical. Van Oosbree was driving his car and it is reported that Vande Weerd was driving the Rock Valley car.

OBITUARY OF ANTJE MRS. CORNELIUS VAN VELZEN 1864-1934
Mrs. C. Van Velzen, wife of the janitor of the First Christian Reformed Church, was called in death Saturday [April 28]. Funeral services were held Tuesday in the First Christian Ref. Church and at the home with the Rev. J. M. Dykstra officiating.
Antje Van Egmond was born in December, 1864 in Thynsburg, South Holland. [In] 1893 she was married to C. Van Velzen. All her children were born in the Netherlands. The family moved to Sioux Center in 1920, coming here directly from the Netherlands.
Besides her husband Mrs. Van Velzen is survived by eight children: Dick, who is living in the Netherlands; John and Peter in Sioux Falls; John [i.e., Joe], Hull; Mrs. J. Van Osbree, William, Mrs. M. Jansen, and Mrs. Henry Jansen, all of Sioux Center.
Source: Sioux Center News, May 3, 1934.
* * * * * * * * * *
Mrs. Van Velzen's Funeral Tuesday
Mrs. Cornelius Van Velzen passed on Saturday at her home here after a week's illness, at the age of 69 years, 4 months and 12 days. She was born in the Netherlands and came to the United States with her husband seventeen years ago, her children having preceded her to this country. She is survived by her husband and eight children, the oldest son residing in the Netherlands; John and Peter at Sioux Falls, S.D.; Joe, Hull; Mrs. John Van Osbree, William Van Velzen, Mrs. Marinus Jansen and Mrs. Henry Jansen, all of Sioux Center; and by 29 grandchildren.
Mrs. Van Velzen was an unselfish and devoted wife and mother and a kind neighbor. Services were held at the home and First Christian Reformed church Tuesday, Rev. Dykstra officiating.
Source: Alton Democrat, May 4, 1934: Sioux Center Times section. 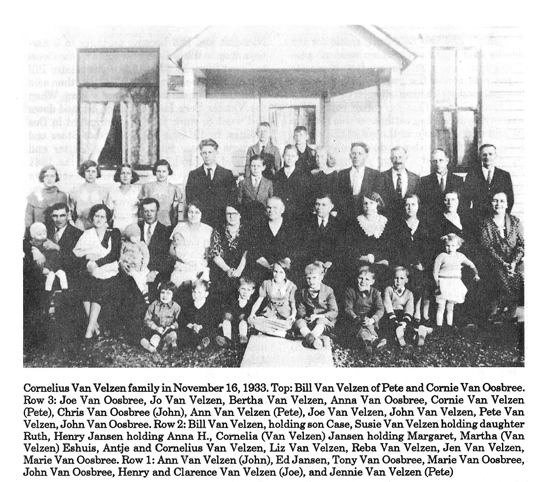