This family history account was taken from the Sioux Center Centennial book of 1991 page 608 and submitted by Margaret Meendering and Alvina Punt. It was transcribed for this Bios by Wilma J. Vande Berg and some research notes were added.

Margje Vande Kamp was born on October 12, 1868 in the town of Oldebroek, the Netherlands also. She was the youngest of five children. Her parents were Guert Vande Kamp and Johanna Achter de Hagen.

Gerrit and Margje were married on May 3, 1894. They were first cousins, which is very unusual today. They lived on a small farm in Oldebroek, the Netherlands. To this union were born seven children: Gertrude, Grace, Johanna (who passed away at an early age), Gerrit, George, Albert and Johanna. These children were all born in the Netherlands.

The family came to America in 1910 by way of boat, which took approximately eleven days. There were no hardships, but Margje was homesick for many days, leaving her sisters and brother behind. In order for them to come across they had to have somebody sponsor them. They were sponsored by Lubbert Niezink. They arrived on April 10, 1910. The weather was cold and there was snow on the gournd. When they came with the family , first they lived on block east of Kum & Go, on a two acre plot. The plot was pasture, which they used to graze their two cows. They lived there for two years and did mason work with Case De Vos, mostly fixing chimneys.

After that, they moved three miles west of Sioux Center on a 40 acre farm for a short time. Their next move was ¾ mile east of South Sioux Center, where they had a little more land. Being land renters, they moved again, this time to Middleburg area where they had 160 acres and farmed there for five years. Margje also did some working out by different people. She did house cleaning in Sioux Center for the Sieperdas, Dyktstras, De Mots, Fluits, and Van Donselaars.

They then moved to a farm owned by their sponsor, Lubbert Neizink, which was 3 ¼ miles east of North Sioux Center. Knowing that they were considering retirement, Lubbert told them about an acreage on the west side of South Sioux Center. They purchased it at this time, but farmed on more year. In that years, while the acreage was rented, the house burned down. But Margje like that house so well she wanted to build one just like it. When this was completed, she said she didnt want to rent it out, but move init herself. There they continued farming on a small scale, having a few cows, chickens and pigs. They lived there 21 years, after which they sold it to Rens.

This was their last home and he passed away February 11, 1953 at the age of 83. She stayed there until shortly before her death, when she went to her daughter, Grace, She passed away there on May 27, 1954

They were married 2 Mary 1894 at Doornspijk, Gelderland Netherlands

Source: Sioux Center News (6-3-1954)
Mrs. Margje Vande Kamp, Sr., passed away Thursday afternoon at the home of her daughter, Mrs. Jake Hoogland, at the age of 85 years, 7 months and 15 days. Mrs. Vande Kamp was united in marriage to Gerrit Vande Kamp on May 3, 1894 in the Netherlands. To this union were born the following children: Gertrude, Mrs. Tony Bosch of Artesia, California; Grace, Mrs. Jake Hoogland and Gerrit Vande Kamp both of Sioux Center; George Vande Kamp of Ireton; Albert Vande Kamp and Johanna, Mrs. Henry Kraayenbrink, both of Doon. Mrs. Vande Kamp was preceded in death by her husband who passed away on February 11, 1953 and one child who died in infancy, as well as one daughter Johanna. She is survived by 40 grandchildren and 56 great-grandchildren.
Mrs. Vande Kamp came to America in 1910 and settled in Sioux County. In 1924 she moved with her husband to Sioux Center where she spent the remainder of her life.
Funeral services were held Tuesday, June 1, at 12:30 and 1:00 at the Second Christian Reformed Church with Rev. H.C. Van Deelen officiating. Burial was in the local Community Cemetery. Arrangements were by Vander Ploegs Funeral Home of Sioux Center.
Pall bearers were Gerrit Vande Kamp, Hilbert Vande Kamp, Gerald Vande Kamp, Alfred Hoogland, Gerrit Hoogland and Gerrit Kraayenbrink. 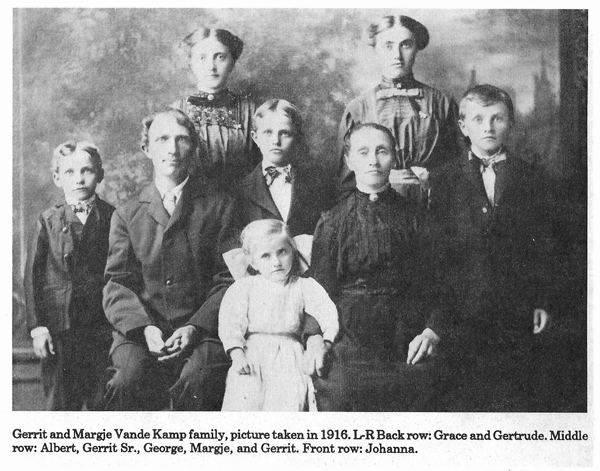