This Bios was taken from a family story submitted by Gertrude Jansen for the Sioux Center Centennial book of 1991 which has history in it back to 1870s. It was transcribed for this Bios by Wilma J. Vande Berg.

Gerrit Vermeer was born December 10, 1859 in Harderwijk, Netherlands to Evert Vermeer and Maria Vanden Berg Vermeer. Gerrit Vermeer came to America at the age of eight years with his parents and sisters, Edie (Mrs. William Gerrits) and Anna (Mrs. John Jansen). They settled in Alto, WI and after fourteen years there, Gerrit started on foot and arrived in Sioux Center with only one quarter left in his pocket. He worked in the area until his marriage on Decemeter 22, 1886 to Peterje Vermeer. Peterje Vermeer was born on March 13, 1867 in Harderwijk, Netherlands to Jacob Vermeer and Jannetje Luchtenberg Vermeer. Gerrit and Peterje farmed southeast of Sioux Center, where their eight children were born. The eight children of Gerrit and Peterje Vermeer are as follows.

1.Evert G. Vermeer was born October 3, 1887 and married Hermina Hoksbergen in 1912. They raised six children who were; Priscilla, Alice, Gerrit, Esther, Margaret and Verlyn. Evert and Hermina Vermeer farmed on his parents farm, after which they retired in Sioux Center.

2.Jake G. Vermeer was born June 25, 1890 and married Wilhelmina Rozeboom in 1914. Their child was Priscilla Vermeer. Jake and Wilhelmina Vermeer farmed southeast of Sioux Center and they retired in Sioux Center.

3.Jannetje Jennie Vermeer was born August 29, 1892 and married Gerrit L. Vande Berg. They were from Sioux Center and the parents of six children. They story is given separately in the Centennial book.
Their children were: Geraldine, Priscilla, Alberta, Gertrude, Alice, and Lowell.

5.Gerrit G. Vermeer, known as Speed. Was born Dec 12, 1897 and married Cora Van Beek in 1929. Darlene is their daughter. Speed worked at the Farmers and Merchants Bank which in 1918 became the Sioux Center State Bank. After serving in World War I, he again took up employment with this bank and even experienced a bank robbery! In 1934 the Sioux Center State Bank had its charter moved to Rock Valley, IA. Speed Vermeer moved with it, and later years retired there.

6.Elizabeth Vermeer was born May 3, 1902 and married Herman Van Eldik in 1937. She taught in the country schools in West Branch and Welcome townships. Herman Van Eldik better known as Cope was an auctioneer. They lived and retired in Rock Valley, IA.

7. Priscilla Vermeer was born August 11, 1905 and married James Hollander in 1932. They raised three daughters: Ruth, Lois and Martha. After Priscilla graduated from the Sioux Center High School, she taught country school in Welcome township one year. The then attended Hope College in Holland MI. After graduating she again taught country school in Welcome township. Jim Hollander operated a Skelly gas station on Highway 75 that was located across from the Central park in Sioux Center. He then sold the gas station to serve in the navy in World War II. After he returned in the late 1940s, he went into partnership with Her De Jongs Hatchery business. He later was in the realty business, semi-retiring in Sioux Center.

8. Benjamin Vermeer was born August 3, 1909 and married Christine Van Roekel in 1935. Their son was Carl Vermeer. After grauation from high School Ben Vermeer received his B. A. degree from Hop College in Holland, MI. He then was employed as bookkeeper for Kooimans Grocery, and later for Mouw Motor Company, both in Sioux Center. In 1944 he served in the Army during Worldl War II, in Texas after serving less than three weeks, he suffered a fatal heart attack. He was buried in Memory Gardens in Sioux Center.

Gerrit Vermeer died October 20, 1923 leaving his wife Peterje a widow with four children yet at home. Peterje enjoyed raising canaries, and her later years became well known for her wool-working. She started with freshly sheared wool, which she purchased by the bag full, directly from the farmer. She would wash, dry, and then spin the wool into yarn. She then dyed the hanks of yarn, then knit articles, including scarves and mittens.

Peterje died March 14, 1952 and she and her husband Gerrit are buried in Memory Gardens in Sioux Center. The spelling of Peterje is recorded several different ways. Her own handwriting showed Pitje, Petje, and Pietje. Her tombstone records Peterje. Her American name in later years was Priscilla. 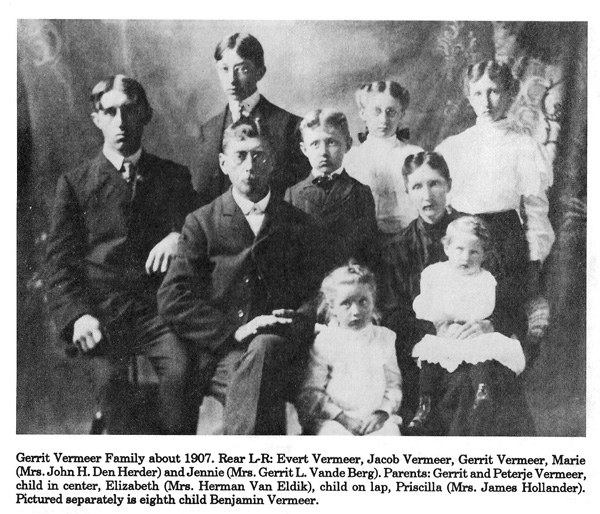