Family story of Daniel Wandsceer comes from the Sioux Center Centennial book of 1991, which includes Sioux Center History from 1870-1991 The story was submitted by their children Jim Wandscheer and Grace Boeyink. Transcribed for this Bios by Wilma J. Vande Berg of the Greater Sioux County Genealogical Society.

Daniel Wandscheer ws born May 17, 1879 in West Branch Township near Sioux Center. This parents were early homesteaders, Johan Dirk Wandscheer and Maria Elizabeth Geerlings. (See their separate story in the Bios and in the Centennial Book) Daniel had six sisters and six brothers that reached adulthood.

Dan was united in marriage to Dina Heusinkveld on December 15, 1905 at Springfield SD. Dina Heusinkveld was born Jul 25, 1882 to Gerrit J. Heusinkveld and Grada Luymus. Dan and his brothers learned the fundamentals of black-smithy and welding from their father. Early in life the boys showed interest in the operation of mechanical gadgets and began to construct plans for new inventions. Sometime they learned by trial and error method. One example of this was a steam engine constructed by the young boys. The engine was mounted on a barrel. When trying to use it as a Fanning Mill, too much steam collected and the force caused the engine to explode The brothers were fortunate never to have had a serious injury in all their experimenting. The Wandscheer boys continually surprised people with their latest achievements. Once they built a kite and allowed it to sail in the sky at night. They tried to locate perpetual motion through a system of weights and magnets.

Dan Wandscheer and his brother Gerrit Wandscheer started a factory in which an all steel corn sheller with a self contained engine was invented and produced. The Wandscheer Manufacturing Company had been in existence in Sioux Center some years before they built their new factory in 1913. The building still stands today (1991) just west of the west side of Coop Gas and Oil. Here the innovative Wandscheer brothers invented and manufactured a wide variety of revolutionary machinery including corn shellers, tractors, furnaces, putty less windows and manufactured a snow blower called Snogo that was later manufactured by the Klauer Manufacturing Company of Dubuque Iowa. Shortly after Dan and Gerrit started the factory in Sioux Center the brothers Ben and Jake joined them in the factory which had gotten off to a good start. But soon after business was showing signs of booming, World War I broke out and all the steel was needed for the military and none was available to the Wandscheer brothers to continue the factory at that time even though they had many orders to fill.

The brothers continued to do corn shelling, threshing for the farmers and road grading in the Sioux Center area. In 1934 Ed Wandscheer moved back to Sioux Center and the factory started the manufacturing of the tubular oil burnng furnace. The five brothers installed the furnaces in their home and then the factory produced the furnaces for homes and commercial use such as churches.

Daniel and Dina Wandscheer were the parents of two children, James Jim (Arta) Wandscheer and Grace Wandscheer (Mrs. Harold Boeyink) of Sioux Center. Dan was active in the community having served on Sioux Center Council for many years. He was a deacon of the Central Reformed church for 15 years. Dan retired in 1952. Dina died on October 2, 1949 and Dan passed away June 16, 1967. Both were buried in the memory Gardens in Sioux Center.

OBITUARY of Dina Mrs. Daniel Wandscheer 1882-1949
Sioux Center News, October 6, 1949
Mrs. Dan Wandscheer passed away at her home early Sunday morning, Oct. 2, 1949, after a prolonged illness.
Dina Wandscheer, nee Heusinkveld, was born in Varsseveld, Holland, on July 25, 1882. At 2 1/2 years of age she came to America with her parents and settled at Harrison in Douglas County, South Dakota. Later they moved to Springfield, South Dakota.
She was united in marriage to Daniel Wandscheer on Dec. 15, 1905, and resided on a farm near Sioux Center, IA. To this union two children, James and Grace (Mrs. Harold Boeyink) were born. In 1911 they moved to Sioux Center.
She is survived by her husband and two children; also one brother and three sisters namely: Mrs. Henry Hokeman of Holland, Mich.; Mr. Dick Heusinkveld of Springfield, SD, Mrs. Theo Abma and Mrs. Ed Wandscheer, both of Sioux Center, her father, mother and an infant brother preceded her in death.
Funeral services were held on Wednesday, Oct. 3, 1949 at the Central Reformed Church, the Rev. Henry G. Eggink of Hospers officiating. 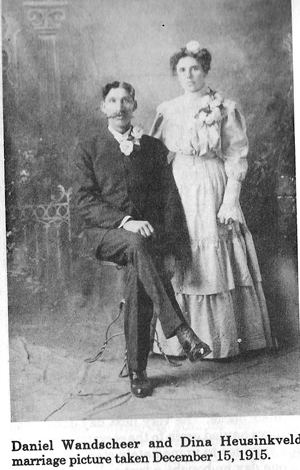