Johan was in the military in the East Indian War before he came to the United States. He stood guard in water for so long then he was on duty that he was temporarily disabled so he could not even walk to the hospital. Upon improving heath he was kept on at the hospital as a helper and became good at the doctor  trade.

Johan and Maria Wandscheer left the Netherlands about 1871 on a Spanish freighter with three small children and his beloved accordion. After a hard voyage with a daughter being born and died at sea and the language barrier, they landed at Halifax, Nova Scotia. From there they journeyed to Pella IA. At Pella IA the family got a wagon, a plow, and oxen. Next they were on their way to the popular Dutch colony in northwest Iowa. An honest land agent showed them where the 80 acres of land was on which they would homestead. They would have to work the land for a certain period of time in order to get the claim. This farm was located two and one half miles south and one mile west of Sioux Center.

The family used the covered wagon as shelter until a dugout sod hut was built. In 1874 they built a shanty 14 feet x 30 feet with siding and a wood floor. In 1883 a larger home was built by Chester Vander Ploeg with four bedrooms. This home burnt in 1901 by a fire at 12:30 p.m. that started from the cook-stove. The family narrowly escaped with the clothes on their backs. The very next day Johan and the boys hauled grain to the elevator for money and supplies to immediately start rebuilding. In one day he bought a tent to live in, beds, a stove, cloth, and arranged for carpenters. The house was ready to move into in six weeks. The two home mentioned are pictured in the old homes album in this book.

The Johan Wandscheer family consisted of thirteen children that reached adulthood and two children the died in infancy. See the end of this story for the childrens names and information on their families.

There were many memorable events in the familys life. In 1872 there was a sudden snowstorm. Johan delivered his children to the school just south of Sioux Center and he decided to stop and visit a neighbor when a terrible snow storm struck and raged for several days. His wife was home alone with several young children. It was several days before the three parts of the family were reunited. The school children had been nourished during the storm by some provisions stashed in the attic of the school by the early settler, Jacob Koster, for just such a emergency. The family endured the 1879 hail storm, grasshoppers, and the 1895 cyclone that killed two students in the school just west of their farm.

Because Johan was a medic in the army he was known among neighbors as Dr. Wandscheer. He doctored his family and many anxious friends and neighbors back to health, as well as their animals. Johan and his boys invented a traveling mail box about 1903 that carried the mail from a half mile away to their house by way of an over-head cable and a battery powered engine, later it was powered by a bicycle wheel that was pedaled.

Johan Wandcheers first wife and the mother of his thirteen growing children died in 1891 and he married Johann Hoornman Voorderman on November 23, 1895 .

There were many aspects to the Wandscheer general farming operation. Honey bees were kept for honey to sell. Once Ed Wandscheer opened a hive without a mask and got stung many times. Butchering animals was a big operation, some of the meat was brought to the butcher in town, some was put in brine, some pickled and some dried. Wash day for such a big family required two washing machine which varied from hand powered to the dog and horse treadmill type and later gas powered engine washers.

Music was a big part of the family life. Johan brought his beloved accordion over from Holland and played it for the early settlers in the church meetings and get-togethers. The children were very musically inclined which came naturally from their father. The family had a pump organ and in about 1880 acquired an Edison phonograph. This phonograph was given to the family because of their love of music and was repaid by a cow. The brothers formed a little band by practicing with their instruments along with the phonograph. The minister at one point didnt know what to think of the band and the barn dances being held in the neighborhood. An investigator was sent to see that the Wandscheer band was up to. The investigator reported that it was all good clean fun and could be done in his own home, so all was considered alright. Dan and Jake went to singing school and learned to sing well. Ed Wandscheer played the mandolin, Jake and Ben played the violin, Gerrit played the banjo, Dan played the guitar, Ed and Jake also played the organ, and Gerrit Vande Brake played the violin. Most of the brothers could play several instruments. Ed and Dan were the callers at the barn dances in those days.

Johan Dirk Wandscheer accumulated about 400 acres of land while his family was growing up. In 1906 he and his wife moved to town. The children of Johan Maria Wandscheer were as follows:

1.Gerrit Jan Wandscheer was born February 11, 1865 and he married Kate Dykstra on March 27, 181894. They settled a Springfield SD and were the parents of a daughter Maria Elizabeth Wandscheer (Mrs. Albert Ludens).

2.Johan Henry Wandscheer was born October 1866 and he married Elizabeth De Zeeuw on September 25, 1913. They were from Sioux Center and were the parents of two children; Maria Elizabeth Wandscheer (Mrs. Edgar O. Lancaster) and John Wandscheer.

5.Jacob Adriaan Wandscheer was born November 7, 1876 and he married Wesselena Kastein on December 1, 1911. They were form Sioux Center and had one daughter Mable Edith Wandscheer (Mrs. Marion De Velder).

7.Daniel Wanscheer was born May 7, 1879 and he married Dina Heusinkveld on December 15, 1905. They were from Sioux Center and were the parents of two children; James Jim Wandscheer and Grace (Mrs. Harold Boeyinks ) families.

8.Gerrit Wandscheer was born December 16, 1880 and he married Jennie Dykstra on February 28, 1907. They were form Sioux Center and had one son Johan Joe Wandscheer of Sioux Center.

10.Reintje Wandscheer was born May 14, 1884 and she married William Voorderman on March 11, 1902. They were from Sioux Center and were the parents of three children: Josie Voorderman, Daniel Voorderman, and Arend Voorderman.

12.Berend Wandscheer was born January 12, 1888 and he married Anna Henrietta Kastein n December 15, 1915. They were from Sioux Center and were the parents of one daughter, Adelaide (Mrs. John Hoekstra).

Obituiary of Johan Dirk Wanscheer
From the Alton Democrat, February 1, 1913:
County Pioneer Passes On
J. D. Wandscheer died at his home in Sioux Center Iowa on Thursday January 23. Death was caused from infirmities brought on by old age. Deceased was born in The Netherlands on October 20th 1832 and was therefore eighty years, three months and three days old when he passed away. He came to the United States in 1872 and became a resident of this county soon after. Mr. Wandscheer engaged in farming in this county and was very successful and he leaves lands and property valued at over $85,000.00. Deceased has been married twice. His first wife, Mary Elizabeth Geerlings, died many years ago. His second wife, Mrs. Voordeman, survives him.
Mr. Wandscheer was the father of thirteen children, all of whom are living. They are: John of Springfield, Henry of Sioux Center, Mrs. B. Kuyper of Boyden, Mrs. D. J. Wesselink and Jacob of Sioux Center, Mrs. G. Peelen of Sheldon, Daniel and Gerrit of Sioux Center, Mrs. John H. Dykstra of Boyden, Mrs. W. Voordeman, Ed, Ben and Ida of Sioux Center.
The funeral services were held on Friday last and were conducted by Revs. Ossewaarde, De Pree and Lubbers. A large concourse of friends and neighbors attended the services. Interment was made in the Sioux Center cemetery.
Brief obituaries in the Sioux Center Nieuwsblad (in Dutch) and the Rock Valley Bee provide no additional information.
The Sioux County Cemetery Index has Wandscheer, John Derk, b. 20 Oct 1833, d. 23 Jan 1913, buried Pioneer Memory Gardens, Sioux Center.

Obituary of Maria Elizabeth Gerrlings, Mrs. Johan Dirk Wandscheer.
----------
The Sioux Center newspaper did not exist for the death time period for Maria Elisbet Mrs. Johan Dirk Wandscheer. Her obit was found in the Orange City Paper.
De Volksvriend of Orange City July 28, 1892 In Dutch
Translated:
Obituary
Today the most tender stroke of my life struck me, very unpleasantly, as my dear wife, Marie Elisabet Geerlings, passed away to death for me and my children. A period of just a few minutes ended her life so dear to us. The confidence that the Savior, whom she sought in her life, did not fail her in death strengthens our beaten hearts. The blow was devastating for us, and great is our loss; but the thought of her gain comforts us. We hereby express our heartfelt thanks for all the help, and Christilk's interest and participation in this deep trial has shown us. J. D. Wandscheer and kinderen Sioux Center July 20, 1892
They were the parents of thriteen children. 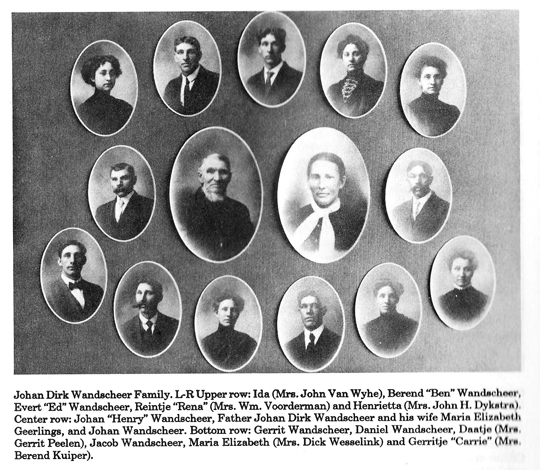