The family history story of Henry Bernard Wesselink and Henrietta Ver Ploeg came from the Sioux Center Centennial Book of 1991 which included the history of Sioux Center back to 1870. Bernice Sandbulte, a grandauther, submitted the story that will follow after the obituaries.

Henry Bernard Wesselinks obituary:
Wesselink, Henry Bernard born 27 Jan 1873 died 7 Nov 1933 wife Henrietta buried in Carmel Cemetery Carmel IA.
Find A Grave lists Henry Bernard Wesselink born 27 Jan 1873 Aalten Gelderland Netherlands died 7 Nov 1933 Rock Valley IA. Buried in the Carmel Cemetery Carmel IA. Father Dirk H. Wesselink. Mother listed as Johanna Gezina Wissink and wife Henrietta VerPloeg Wesselink, children  Johanna Rozeboom, Rebecca Sandbulte, Pearl Vander Ploeg, Harvard Wesselink, Dick H. Wesselink, Minerva Sandbulte and Harold Wesselink.
-------
Sioux Center News of Nov 9, 1933
Supervisor H. B. Wesselink Dies Suddenly
Died Tuesday While at Work
H. B. Wesselink of Rock Valley county supervisor for the past three years, passed away unexpectedly a his hoe Tuesday noon. M. Wesselink had spent the morning visiting the homes of the sick and needy with the county welfare nurse and was looking over some papers preparatory to going out with the nurse again that afternoon, While sitting at his desk he suddenly slumped over rested his head on his arm and died. He left no parting word to his wife nor did anyone know that he in the least way ill. Mr. Wesselink had been suffering from diabetes for some time, however, he was believed to be in very good condition at the time.

His untimely death came as a blow to his many friends and Sioux County citizens who are interested in good government. Mr. Wesselink had been elected county supervisor three years ago, succeeding Jake Gorzeman of Hull and was reelected in the past election, proof of the esteem in which he was held by his neighbors and fellowmen. Besides service as county supervisor Mr. Wesselink was for several years township trustee of Plato township. He did not confine his activities to politics alone but also played a prominent part in building up the Reformed church at Rock Valley. Mr. Wesselink was a member of the consistory of that church at the time of his death.

Mr. Wesselink was born about sixty years ago of pioneer Sioux County farmers on a farm near Sioux Center. He has lived in Sioux County all of his life, being a dirt farmer all the time except for several years when he managed the Carmel store and the time he has served as a supervisor. After his marriage to Miss Hendrika Ver Ploeg in 1890 he started farming near Rock Valley. During an interval of a number of years he engaged in farming near Sioux Center and Carmel and managing the Carmel Store before returning to his farm near Rock Valley.

Besides his widow Mr. Wesselink is survived by six children Josie Mrs. Will G. Rozeboom of Carmel, Dick of Rock Valley; Minerva Mrs. Henry Sandbulte, Rebacca Mrs. Will Sandbulte, both of Sioux Center; Harold and Harvey both of Rock Valley: and three sisters, Mrs. a. Vander Stoep, Mrs. Jim Borgman, and Mrs. Jake Mieras all of Sioux Center; and one brother Dick D. J. Wesselink of Perkins; and two half brothers, Dick Wissink of Hull and Jake Wissink of Steen. A daughter, Pearl Mrs. Will Vander Ploeg passed away two years ago.

Funeral services will be held on Friday in the Reformed Church at Rock Valley. Three of the members of the county board of supervisors and three fellow members of the church consistory will serve as pall bearers. Interment will be in the Carmel cemetery.

Mrs. Johannes Rozeboom suffered a heart attack at her home here at about 10 o'clock Sat. morning, May 12, 1945 and passed away very suddenly. She had been enjoying good health up to the time of her death and had reached the age of 73 years.

Mrs. Rozeboom was born in Pella, IA on Feb 14, 1872 and was first united in marriage to Henry Wesselink who preceded her in death in 1933. She was also preceded in death by two children, Mrs. William Vander Ploeg and Harvard Wesselink. On Oct. 30 1941 she was united in marriage to Mr. Hannes Rozeboom and was a Sioux Center resident since that time.
Source: Obit card from Vander Ploegs Funeral Home. 1945

The Sioux Center Centennial Book a People with Convictions 1870-1991 has a family history story in it submitted by Bernice Sandbulte on page 654 which includes a lot of VerPloeg history. It is hereby submitted.

Transcribed by Wilma J. Vande Berg.
Wesselink, Henry Bernard and Henrietta Ver Ploeg (written by Bernice Sandbulte)
Rebbeca and Minerva Sandbultes mother maiden name was Henrietta Ver Ploeg. On Dec 13, 1800 a Van Zee baby girl was born and in 1818 married a Henry Ver Ploeg. They lived in Holland. There were 12 children born to this union. While still in Holland, one baby was lost in infancy and a son drowned at the age of 15 years. A son Engel had gone to America 6yrs before the rest of the family came so he could be of help when the entire family arrived in the strange new land.

While enroute to America the father died 9 Jun 1853 and was buried at sea. Mrs. Ver Ploegs baby also died, but the grieved mother wrapped the child and carried it as if it were alive for a time so that the baby might have a proper burial in America.

[**The complier has inserting some historical information here: on the site www.wiewaswie.nl found the marriage of Hendrik Verploegh age 24 married Aartje van Zee age 17, Hendrik was the son of Willem Verploegh and Cornelia Blom. Her parents were Engel Van Zee and Engeltje Bijl , they were married on 4 Sep 1818 at Herwijnen, Gelderland, Netherlands.

From the Pella 1847-1922 book lists Hendrik Verploegh, Mrs. Hendrik, Jacobus, Cornelis, Koenraad, Govert, Hendrik and Jaantje. Came to Pella in 1853-1855. (Hendriks name appears on the immigration list which was possibly complied as they left Holland but he apparently died at sea)

Engel Ver Ploegh came to Pella in 1847 on Ship Peter Floris. He was born 15 April 1823 Herwijnen. Engel Verploegh was found in the 1900 census living in Lake Prairie Marion Co. IA. born Apr 1923 Netherlands married to Paulina Buwalda in 1959 they had two children at the time William and Cornelia. Engel died 19 Apr 1902 Marion Co. IA. Six children are listed on Find a Grave.

Engle Verploegh borrowed money from a relativeVanzee, who was also coming to Americafor his passage from Holland to the United States. Presumably his ticket was $78 and he worked for a year or more in Pella, Iowa to repay VanZee. After he repaid his debt, Engle traveled to California to follow the Gold Rush excitement (and apparently walked almost the whole way, leading a herd of either bison or buffalo). With his acquired gold dust stored in leather pouches tied around his waist under his clothes, Engle boarded a ship from California to Panama, walked across Panama to New Orleans and traveled back to Iowa (during which he presumably walked most of the way). His obituary is on ancestry.com * ]

Back to the family history submitted by Bernice Sandbulte
Still the hand of fate was not ready to rest from its work upon the unfortunate family; her brother Gover Van Zee, who had been sick enroute, laid down his life at Ellis island. [note: Ellis Island didnt open until 1892, could have been Castle Gardens] Her son Engel, never to be found as he had left on the covered wagon trail for California and had sent a letter to Holland in vain, about the time they were leaving. [see above historical note on Engel] The much drooping family tree was also to lose a son James, a daughter Cornelia, and a son Koenrad, before the mother herself passed away just a few years later. [note added - Aartje Van Zee Ver ploegh died 9 Mar 1886 Pella Marion County IA].

Severe sickness meant almost certain death in those days. Loved ones fell from the family like leaves shaken from a tree in the wind. Who can realize the hardships of her day and the grief from losing six of her children, her husband and her brother? By now the Civil War was on, and the country was in turmoil The Pella land was well settled and had increased in value to a price that made it hard for young farmers to get a start. So the young family packed up and traveled by covered wagon to Oregon.

Just two years later, in 1868, the family returned from Oregon to New York by way of boat. This was a 6 month journey by water around the country, but the family was anxious to avoid crossing America with its Civil war symptoms. Taking a train from N. Y. they settle in Pella again.

Only 7 years after their arrival and settlement in northwest Iowa, Koenrad Ver Ploeg died on Feb 18, 1877. The widow was left with five children, the oldest was 16 years and the youngest 6years old. The following year 1878 Pieterje married William Bakker. The two adopted a son Gerrit Fisse, who joined a famly of 5 daughters of Pietertje and the two daughters of Bakker, Lucy and Dirkie. Bakker also has a son John William, he was adopted by Uncle frank Bakker.

In 1890 daughter Henrietta Ver Ploeg married Henry Bernard Wesselink. The Wesselinks were also a part of the pioneer group which had come from Pella [actually Wesselinks came by way of Minnesota) .
The following article is an account of the death of Henry Bernards father, Dirk Jan Wesselink. Dirk Jan Wesselink and Gerrit Kleuvers, neighbors went to the Rock River to get timber. It seems they attempted to cross the river at a new place and had forced the oxen into the stream, and that the animals fearing the unexpected deep water had turned sharply and upset the wagon. As the wagon gear came apart the men were probably thrown into the river. Mr. Wesselink left a wife and eight small children. The children of Dirk Jan Wesselink were Henry John, Henry Bernard, Dick John, Cynthia Wesselink Raak Mieras, Dena Wesselink Borgman, Alida Wesselink Vander Stroep. Later this widow married Harmen Jan Wissink. Wissink had 12 children and Mrs. Wesselink had 8. They moved their shanties together. The ceiling was so low that a man had to put his pants on sitting down. The Table and stove were partly supported by bricks, and they burned hay and cornstalks for heat. Later when the First Ref. Church in Sioux Center was built, Wissink moved they pay cash, and the motion was carried.

The family of Henrietta Ver Ploeg and Henry Bernard Wesslelink grew quickly with the birth of Johanna Josie Rozeboom on March 12, 1891. The following year, a boy, Dirk Henry was born, carrying the hereditary blood disorder which resulted in his death only 3 months later. A healthy boy born one year later also named Dirk Henry and followed by a daughter Pearl Van Der Ploeg. Another son Coonrad died at 5 mo. with the blood disorder. On May 12, 1900, identical twins girls were born, Rebecca Margaret and Minerva Margaret. A third son Coonrad Harold and a fourth son Harold Coonrad were born and last to the family blood disorder. Finally, they had two more healthy sons, Harold Coenrad, born in 1907 and Harvard James born in 1911. The last child was a stillborn baby boy.

In 1908 the family turned to storekeeping in Carmel. In 1920 Mr. Wesselink sold the store to Albert Scheffer, and he, Wesselink, moved to a farm N. E. of Rock Valley. Mr. Wesselink died in 1933 and Mrs. Wesselink married Hannes Roseboom in 1941. 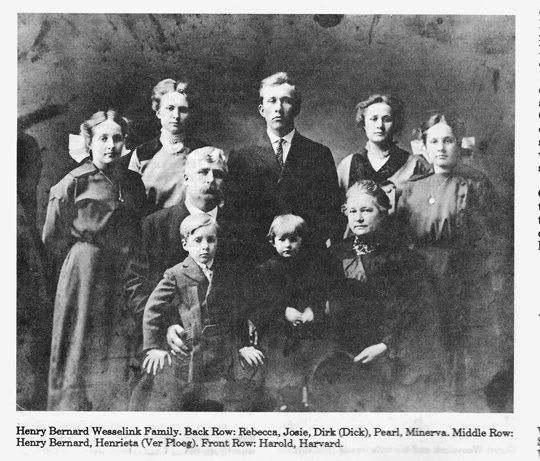