Note : there are some errors with names and dates in this article, see below the article for correct information. [corrections are in ( ) ].

He was a young man when he came to America in 1880(1881) . Sikka (Sikke) Douwe farmed southwest of Sioux Center. He also did small jewelry repair and sold insurance as a side business. He passed away suddenly from a heart attack in front of Balkema Store in Sioux Center on February 8, 1917, while going to meet his wife from the train. He is buried in Memory Gardens Cemetery in Sioux Center.

Above concludes the article submitted to the book by Hendrene Kalsbeck. Hendrenes maiden name was Lammers so she descended from Johanna Mrs. Henry Lammers. Not to slight Hendrene for the errors found as information can get passed down incorrectly and errors are common.
Below are some research notes to add to this family history compiled by Wilma J. Vande Berg. The Westra line is very distantly related to her and ties into a long line of Friesland ancestors dating back to the mid 1300s namely one noted Freedom Fighter Grote Pier whos spear and helmet are in the museum in Leeuwarden, Friesland Netherlands.

Obituary of Sikke Westra in the De Volksvriend paper of Feb 15, 1917 In Dutch
Translated:
On Friday the sad news arrived here that Mr. Sikke Westra, Thursday evening was very suddenly overloaded. His wife and 5-year-old daughter had gone to Sioux City on Thursday morning to consult physicians about the condition of the child. Mr. Westra, living between Ireton and Sioux Center, had found himself des n. m. went to Sioux Center and after some time was with the children, Mr. and Mrs. Brandsma having been there, he made his way to the station at about 9 o'clock, hoping to take away his wife and daughter again. Being another black from the depot, he collapsed open and was dead. Heart disease is thought to be the cause of this sudden death. His wife, however, did not arrive that evening, and received the sad news while still in Sioux City. The deceased was born in Friesland, the Netherlands, and came as a handsome man with his parents, the late Mr. and Mrs. D. Westra to Orange City. He spent his early years here and ever since he has lived in this area, so that he also had many friends here. He had reached the age of 53 years. In addition to his wife, he leaves 5 children behind; Willem at Estelline SD; Mrs. Brandsma at Sioux Center; Dick, Johanna, and Pearl at home. He also has 1 brother and 7 sisters in addition to his stepmother, the widow. D. Westra over here. The funeral took place on Monday n. m. place of from Mr. and Mrs. Brandsma and from the first Reformed church of Sioux Center. Our warmest sympathy with the grieving family.

Obituary of Peternellie Van Hitzma Mrs. Sikke Westra 1870-1958
Funeral services were held Saturday afternoon at the First Reformed Church of Orange City for Mrs. S. Westra, 87, who passed away Wednesday evening, April 23, at the home of her daughter, Mrs. Henry Vander Weide, near Orange City.
Rev. Henry Colenbrander officiated at the services. Interment was made in the Sioux Center Community Cemetery under the direction of Van Etten Funeral Home.
Mrs. Westra, nee Peternellie Van Hitzma, was born at Franeker, The Netherlands, on December 9, 1870, and immigrated to this country with her parents in 1881. She was married to Sikke Westra, February 25, 1890, and they resided on a farm west of Sioux Center until the death of Mr. Westra, February 8, 1917.

At that time she moved to Sioux Center with her family and lived here until 1939 when she became a resident in the Pioneer Home of Orange City. The past 3 1/2 years she has spent with her daughter, Mrs. Vander Weide.

The obit of Sikkes father Douwe Westra, however, no obit was found for his mother, Beitske Houstma Mrs. Douwe who died about two years (1883)after they arrived in the USA. Douwe later married a Mrs. De Jong in 1884.

Alton Democrat of Jun 26, 1909
D. (Douwe) Westra died last Friday afternoon at the age of seventy six years. Deceased had been a sufferer from asthma for a number of years. He was born in Holland in 1833 in the province of Friesland. At the age of twenty six he was married to Beitske Houtsma and the following children were born to them: Mrs. Wiekamp, Mrs. H. Zoetenhorst and Mrs. G. Van Steenwyk of Sioux Center , Mrs D. Brinkman of Sheldon, Mrs. K. Terpstra of Pipestone Min, Mrs. D. Bonnema of Lebonaon, Mrs. Pryde and Gerrit of Boyden and Sikke of Ireton. In 1881 the family came to this country and two years later Mrs. Westra died. In 1884 he was married to Mrs. I. De Jong who survives him. The funeral services were held Monday in the First Reformed church of which he was a devout member.
[From an account on ancestry.com (done by others) Douwe Westra was born 3 Feb 1833 at Drinrip, Friesland Netherlands, died 18 Jun 1909 Orange City Ia. He was the son of Sikke Douwes Westra 1798-1877 and Riemkje Jacobs Hellinga 1808-1886, he was married 4 Jun 1859 at Tjuemarem Friesland to Beitske Gerrits Houtsma 1836-1883. They had a large family.] 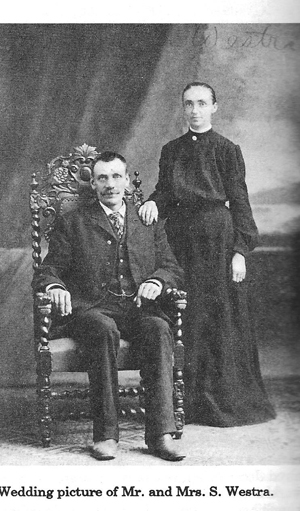