This Wissink famly history was taken from the Sioux Center Centennial book page 665, that was submitted at the time by Gertrude Wissink. Transcribed for Sioux County Bios by Wilma J. Vande Berg

The family first settled in Greenleafton, Minnesota, but when land became available in Sioux County, Iowa for homesteaders they moved further west. Families coming with them were the Jacob Kosters, Gysbert Van Beeks, Rensinks, Wesselinks, Kempers, TeGrotehuis, Doorninks and Kleuvers.

They lived in sod huts first and later in little shanty houses. Life was hard and survival was a day to day process. They had to go to the Rock River, about 15 miles west of Sioux Center for wood to burn and build their shanties.

Gerrit Kleuvers and Dirk Wesselink went on one of those trips and failed to return. A search party was organized by the neighbors and when they came to the river they found the oxen still yoked to the wagon. Upon further investigation the bodies of the two men were found in the river. They had tried to cross the river at a different place and it was too deep, when the oxen refused to go they evidently turned and the wagon tipped, both men fell into the river and drowned.

Mrs. Wesselink was left a widow with eight children and tried to raise them alone with the help of neighbors. One of those neighbors was her brother in law, Harmen Jan Wissink. Harmen Jans wife, Gerdina, a sister of Mrs. Wesselinks husband had passed away and a romance developed and since both Harman Jan and Mrs. Wesselink had children to raise they married, moved their shanties together and all was well and soon there were two more children, Dirk Hendrik Wissink born Dec 11, 1877 and Jacob Wissink born Sep 18, 1881. So now there were 16 children between the two of them.

The shanties were small and one was so low that a man had to put his pants on, sitting down, Hermanus Jan was the 3rd oldest in this crowd and worked hard on the farm all his life. When Hermanus was 26 years old he took as his bride Grietje Van Mannen Roelofs on March 11, 1889. Grietje was born Oct 1, 1870 in the Netherlands to a Van Maanen family (unknown).. the youngest of 8 children. (see the end of this history for identification of the Van Maanen parents) When her parents lost their lives in a small pox epidemic (in 1875) the children were left alone in a sod hut. On a cold winter night the roof of the sod hut caught fire forcing the children to escape with only what they had on and walked to the nearest neighbor about a mile away. Grietjes older sister, Jacoba, carried Grietje on her back, walking bare footed and froze her feet so bad she never walked good again. All the children were then put in different homes causing the family to be separated the rest of their lives. Grietje went to live with H. J. Roelofs and his wife who had no children of their own. Although never legally adopted she was considered their daughter.

When Hermanus and Grietje were married they first settled near Hudson, South Dakota where Herman Jan was born on Jan 17, 1890. Soon after that the Roelofs moved to town and Hermanus and Grietje moved on the farm just south of the 1st Ref. church, where the rest of the family was born. Henry John, Nov 29, 1891 only lived a short time. Then Rena (Mrs. Clarence Den Herder) was born on Nov 10, 1893. She was to be the only girl with 8 more brothers to help raise. First came Henry John, Nov 14, 1895; Gerrit Dec 29, 1897 died in 1899 then another Gerrit, May 11, 1901; William March 11, 1906; Martin Oct 1, 1907 Andrew Alfred April 22, 1911; and finally a set of twins. Lawrence and Harvey on March 13, 1915. The family lived their entire life on the farm which at one time extended all the way from the First Ref church and cemetery all the way to the mile road and now known as the De Herder addition.

Hermanus and Grietje saw 5 of their sons go off to wars. Herman and Henry in World War 1 and Alfred, Lawrence and Harvey in World war 11. Herman served in France and was gassed, Henry was on the boat in New York Harbor ready to sail for Europe when the Armistice was signed. He told of watching from the boat all the celebration going on on shore and not allowed to participate. Alfred, Lawrence and Harvey all saw action in World War 11 in the European area with Harvey getting wounded in France by a land mine. He had part of his foot shot off and spent about 3 years in hospitals. Another son, Gerrit had moved to California during the 20s to find work and in a depressed mood took his own life. All this left Grietje a very depressed and unhappy person.
As a result of this Rena, the only girl acted as mother to the boys especially the younger ones. They were pretty naughty at times. Lawrence, Alfred and a friend thought they wanted to get into the horse business and bought a load of wild broncos. When they got them into the barn they were so wild that they wrecked the interior of the barn and some of the horses had to be killed. Another time Lawrence was learning to drive the old Model T and instead of backing out he went forward right thru the end of the corn crib. They gave their sister some pretty bad headaches at times.

Hermanus and Grietje lived on the same place until 1941 when unable to take care of their need any longer they moved to the Sheldon home for retired people. Hermanus died on August 12, 1948 and Greitje on Jun 21, 1956. Both are interned in the Sioux Center Cemetery.

From the obituaries posted on our Sioux County Genealogical site www.iagenweb.org/sioux ...
Obituaries of Hermanus Wissink and wife Grietje VanMaanen /Roelofs
Source: Sioux Center News June 28, 1956
Born October 1, 1870
Died June 21, 1956
Mrs. H. M. Wissink, nee Grietje Roelofs, passed away June 21 at Sheldon, Iowa, following a short illness. Grietje Roelofs was born in The Netherlands October 1, 1870. She came to America with her parents at an early age.
She married H. M. Wissink on March 11, 1889. To this union 11 children were born, three of which preceded her in death. Her husband also preceded her on August 12, 1948.
Surviving her are seven sons and one daughter, Herman and Henry of Sioux Center; William, Ireton; Martin, Rock Rapids, IA; Alfred, Grand Rapids, Mich.; Lawrence, Sheldon; Harvey, Dallas Texas; and Rena, Sheldon.
Funeral services were held at the Holland Home June 25, at 1:00p.m. (in the First Reformed Church at Sheldon, IA.)
Burial was in the Sioux Center Community Cemetery.

Sioux Center News August 19, 1948
HERMANUS WISSINK PASSED AWAY
Mr. Hermanus Wissink died on Thursday morning at the age of 85 years, 3 months and 6 days. He had been ailing for more than a year. Mr. Wissink was one of the oldest pioneers in this area, having remembered the sod hut days.
He was married 58 years ago to Grietje Roelofs and to this union were born eight children, Herman, Mrs. Clarence Den Herder, Henry, all of Sioux Center, and William of Ireton, Martin of Rock Rapids, Alfred of Grand Rapids, Lorance of Rock Rapids and Harvey of Commerce, Texas. There are 18 grandchildren.Two brothers preceded him in death and one sister, and he is survived by two half brothers.
Mr. Wissink moved to Sheldon in January of 1940 after having farmed the Sioux Center vicinity for more than fifty years. Funeral services were held here Monday, from the home of Henry Wissink, and First Ref. Church. Interment at local community cemetery.
(Also referenced in the Sioux County Cemetery Index as born May 6, 1863 and buried at Sioux Center, IAs Memory Gardens) 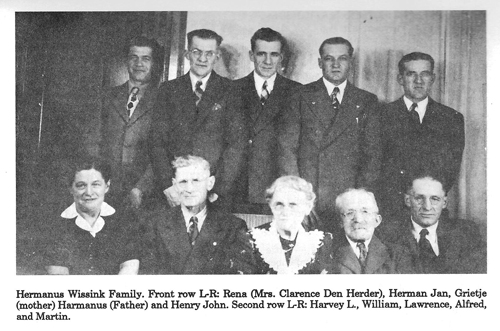