This family story was taken from the 1991 Sioux Center Centennial book page 667, it was submitted by Tena and Francis Wynia. It was transcribed for the Bios page by Wilma J. Vande Berg

Lieuwe (Louis) Wynia, son of Foeke and Maaike (Bruinsma) Wynia, was born at Franeker, Friesland, The Netherlands July 22, 1855. Louis emigrated to the United States in 1881 and settled in Sioux County, Iowa.

Suster De Vries, daughter of Syie and Johanna (Wynia) De Vries, was born Jun 20, 1859 at Franeker, Friesland, The Netherlands. Suster emigrated to the United States in 1880 with her mother, Johanna and three brothers and two sisters. They first settled on a farm near Carnes and Suster was employed as a hired girl for a farmers wife a few miles north of Le Mars, Iowa. She would often walk to her mothers home, when she had a day off, to sew clothes for herself. The De Vries family later moved to a farm 4 ½ miles south of Sioux Center.

Louis Wynia and Suster De Vries were married on March 1, 1884 by the Rev. James De Pree, Pastor of the First Reformed church of Sioux Center where they were members. Louis and Suster started farming 1 ½ miles west of Orange City, Iowa where a son, Frank, was born August 12, 1886. They moved to a farm east of Rock Valley, Iowa where another son, Seine (Sam) was born June 1, 1888. A daughter, Johanna, was born here July 29, 1891. Johanna married Chris Van Schepen February 27, 1912. They lived near Ireton Iowa.

On May 3, 1895 a devastating tornado started in the southwest part of Center Township and along with many other farmsteads, it struck the Wynia farm. Mrs. Wynia had put Johanna and the dog in the outside storm cave and went back into the house to get the baby. It was then that the storm struck the house and she and the baby were blown away with it. Mr. Wynia, who had been closing barn doors, escaped injury by clinging to a nearby tree. He found his wife in the slough some distance from there the house had stood. She was seriously injured and the baby lay dead in her arms.. Son, Frank and Sam, were at school where the teacher and pupils lay in a ditch during the storm. The baby was buried form the First Reformed Church of Sioux Center along with four other victims of the storms. Mrs. Wynia lay unconscious for three weeks and was cared for at her sisters home. A new house and other buildings were again built after the tornado so the family could go on.

In March 1897 another son, Mike, was born and he passed away in August 1897 and is believed to be buried in the Ireton, Iowa Cemetery. On March 21, 1900 a daughter, Maggie was born. The children all attended Center Township #5 school which in ¾ mile west and 1 Mile north of the farm. When they became older, the boys only attended school in the winter months.

On November 19, 1915 Frank Wynia and Johanna Rodenburgh were married by the Rev. F. Lubbers at the parsonage of the First Reformed Church in Sioux Center. Johanna Rodenburg was born October 22, 1893 in the Netherlands and emigrated to the United States with her mother, two brothers and a sister in March 1912.

Frank and Sam continued farming together until Sam married Minnie Draayer October 13, 1919. They then moved to a farm located ¼ mile east and ½ mile north of the Wynia farmstead.
Frank and Joanna stayed on the Wynia farmstead where they raised six children. Louis was born August 19, 1916 and married Anna De Vos September 18, 1940. They lived on a farm near Ireton. A daughter, Tena, was born August 27, 1918. A son, Cornie, was born March 26, 1921 and married Jeanette Vander Griend November 19, 1945, son Martin was born February 23, 1924, Melvin, was born July 11, 1927 and married Arlene De Herder September 7, 1951. Following his discharge from the service in January 1953 they moved to a farm near Rock Rapids, Iowa. A daughter, Frances was born November 25, 1931. All six children received their grade school education at Center Township #5 school.

Early in their marriage Mrs. F. Wynia did the family laundry with a Saint Bernard dog walking on a treadmill to power the washing machine. This was done outdoors in the summer months. N the winter she would move the machine indoors and power it by hand. In 1926 Fran and Johanna remodeled and enlarged the house which is still on the farm and is now occupied by a grandson Marvin Wynia and his family . Their story is given separately in the book.

Frank Wynia passed away on the Wynia farmstead April 14, 1947 and is buried in the Sioux Center Cemetery. In July 1947 Mrs. Wynia and daughters, Tena and Frances moved into Sioux Center. Mrs. Wynia passes away July 23, 1963 and is buried in the Sioux Center Cemetery. Tena was employed at the Coop Produce for five years. She was then employed as a bookkeeper at Gus Pech Mfg., Le Mars, Iowa from April 1953 until her retirement in December 1981. Frances attended high school in Sioux Center and upon graduation was employed as bookkeeper at Vander Ploegs Furniture for one year. In July 1952 she began her employment at the First National Bank of Sioux Center. 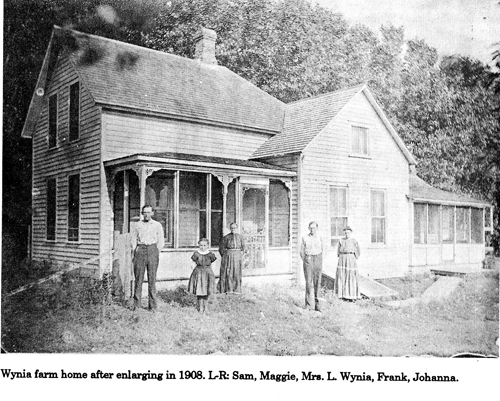