VanDerSchaaf and Dykstra family history from 1882

This article was published in the Sioux Center Centennial book of 1991, submitted by Nettie Vander Schaaf: was accompanied by a photo of the three VanderSchaaf siblings  They were Auke Van Der Schaaf at 78 years, Beitsche (Mrs. Doekele Dykstra) and Johannes Van Der Schaaf.

About 1830 there dwelt in the quaint old village of Lollum in the province of Friesland, Netherlands, a carpenter named Reinder Van Der Schaaf with his wife Doetje Tigchelaar. Reinder belonged to that respectable class of craftsmen which as smith, baker, carpenter, copper mason, and printer constituted the untitled aristocracy of a Frisian Village. Reinder sometimes was employed in the exacting technique of repairing the water mills of the lowlands, The name Vander Schaaf signifies the man of the plane which is a tool used for smoothing wood.

To Reinder and Doetje were born three sons, Auke, Mink and Johannes; and on daughter Beitsche. The mother Doetje died when Beitsche was but six years old. The little girl was already trained by her mother in the fine art of knitting. Eight years later the Childrens father died and the children were orphaned and scattered to fate, and conditions for them were very difficult. Their inheritance was mismanaged by guardianship. The brother Mink died as a young man from exposure after convalescence. Auke and Johannes served as hired men with farmers. Beitsche was employed as a young maid in a doctors family. Her employer was a rude moody person and the young girl wept often in her loneliness for her former family life.

It was Beitsches good fortune to win the affection of a widowed land owner some years older. Doekle Dykstra of Pingjum. Her brother Auke van Der Schaaf married Sytske Bruinsma and were farmers. Her brother Johannes the younger of the three carried out a bold resolve to migrate to American in 1872.

This move by the young Johannes Van Der Schaar was the first step in a process that eventually was to tansport the entire family to the New World, America. Johannes established himself in Sioux County Iowa, where he married Antonia van Gorkum, (there is a separate story on them in the Sioux Center book)

AukeVan der Schaaf and Bietsche Dykstra who remained in the Netherlands corresponded with their brother in America. Conditions were deteriorating in the Netherlands following the France Prussian War. In the early 1880s the land value sand from 1000 guldens per ponde mast, equal to about ¾ acre to 500 guldens. This also effected the financial affairs of the landowners. The Dykstra family and their seven children, before land values sank even lower the family sold the ancestral estate and proceeded with plans to come to America.

The family of brother Auke Van Der Schaaf also decided to join the Doekle Dykstra family and their brother Johannes in America.

On May 12, 1882 they embarked at the seaport Harlingen for Rotterdam from which the voyage was undertaken on the Steamship Schiedam. The voyage to America proceeded quite uneventful until they were just two days from the end of their journey. An explosion occurred on the ship and it was reported that the ship would sink. It happened in early morning and the consternation among the 700 passengers was simple indescribable. There was prayer, cursing and despair among the passengers. Mother Beitsche calmly gathered her family and was exhorted to complete resignation of the awful fate of all of them going down to the deep together.
However, the terrible disaster was averted b prompt action of the crew that saved the ship. The engines were put insufficient repair to proceed on half steam and after some delays arrive n New York.

On June 4, 1882 they arrived in Alton Iowa by train and journeyed to the farmstead of brother Johannes with a spring wagon. The farm was three and a half miles west and two mile north of Orange City. The Auke van der Schaaf family occupied a room in the humble dwelling and the Dykstra family lodged in the granary.

Johannes and Antonia Van Gorkum Van Der Schaafs children were; Isaac, ring John, Jacob, Edward and two daughters Mary and Bertha. The family of Auke van Der Schaaf had daughters Dora and Sytske Sadie born after they go there. They obtained residence in Orange City. The family of Doekle Dykstra were established on a farm two and a fourth miles west of old town Sioux Center.

An information note is that there were two young men that accompanied the families of Auke Van der Schaaf and Beitsche Dykstra to America those being, Hessel roorda and Johannes Cannegieter.

The information for this story was partially compiled from a history called the Van Der Schaaf Clan in America 1882-1952 by Wesley C. Dykstra of New Concord, Ohio. 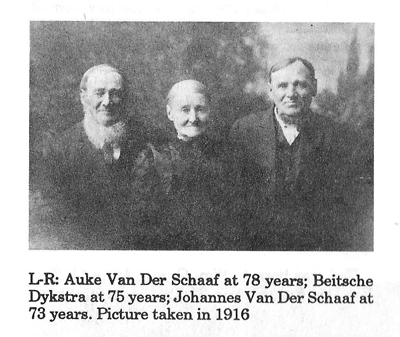