When school doors swing open and bells ring calling students to class next fall one familiar teacher will not be at her desk for the first time in 33 years.

Mrs. Margaret Pecks is retiring at the end of the 1983-1984 school year. She has been on the faculty of the LeMars Community school system since 1950 with the last eight years at Clark Elementary where she teaches fourth grade.

Two open houses will be held in her honor this month. Clark faculty will host the first one from 3:45 to 5 p.m. Thursday, April 26, in the Clark gym. All former students and parents of students are invited to attend.

Mrs. Pecks family will host an open house at the Pecks home at 207 10th Ave. SE on Sunday, April 29, from 2 to 4 p.m. Her friends and former students are invited. Mrs. Pecks said your attendance is the only gift.

Mrs. Pecks graduated from LeMars High School in 1940 with a normal training school teachers certificate which enable her to teach in a rural school after age 18.

The normal training course was an elective and taken along with regular 11th and 12th grade subjects. We even did student teaching, Mrs. Pecks said.

Following her graduation, Mrs. Pecks taught three through six and eighth grades at a rural Remsen school. In 1950 she joined the LeMars school district faculty and taught kindergarten through eighth grade from 1950 to 1961 in a rural school.

At the same time she began working on her bachelor of arts degree, earning it in 1968 from Westmar College. The LeMars school district at that time informed teachers they must have two years of college and by the early 1970s a 4-year education.

Mrs. Pecks continued work on a degree from 1950 to 1968 in teaching by attending summer and night classes and taking correspondence courses.

Reflecting on her years as a school teacher, Mrs. Pecks said, The students received a lot of one to one education but did miss out by not having the competition they would have had in a bigger school.

She said students missed out on some things when a rural teacher did not have a background in music or art.

The students received art and music, but not to the degree they do today. I, for one, did not have a music background so I was unable to give any extensive music training, Mrs. Pecks said.

From the rural setting, Mrs. Pecks was transferred throughout the years and taught at Brunsville, Merrill, Craig and LeMars.

Mrs. Pecks said she feels one of the most difficult problems for her in her 33 years as a LeMars school district teacher was moving from one building to another.

It was interesting, but sometimes difficult. Although, I must say, it kept my interest up by not staying in the same routine. Moving keeps a teacher fresh.

Mrs. Pecks said she has had many rewards as a teacher, but the biggest is having students have an appreciation for school. My reward is having kids like school.
She has no regrets about choosing teaching as a career spanning four decades.

Teaching is something I always wanted to do. I didnt care how many hard knocks I had, and I had my share, nothing was going to keep me from teaching, Mrs. Pecks said.

Will she miss the daily routine of going to school after so many years? No, she says, but I will miss the kids. She added that she will enjoy being home and doing things with her husband. You know, time is getting short, she said with a chuckle.

Mrs. Pecks has received numerous honors during her career including being the Outstanding Elementary Teachers of America in 1970. She was nominated for the honor by the Merrill principalPecks continued p. 16 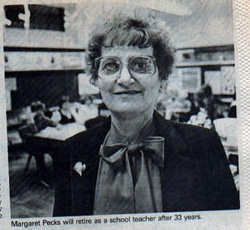