Due to the COVID-19 pandemic and the Governors proclamation, masks were mandatory and social distancing guidelines applied during all services. The Armstrong-Van Houten Funeral Home of Mapleton is in charge of the funeral arrangements.

Elnora Jane Dose, the daughter of Gerald and Esther (Ruchti) Nathlich, was born on May 11, 1935, in Ute. She grew up in rural Mapleton and received her education from Mapleton High School.

On Nov. 20, 1955, Elnora was united in marriage to Norman H. Dose in the St. Matthew Lutheran Church of Mapleton. The couple lived in Mapleton for a year then moved to a farm west of town. Later, the family moved to the Bennett farm near Smithland. They lived in Danbury for a year and moved back to Mapleton in 1984. Elnora enjoyed being a farmwife and homemaker.

In her younger years, Elnora was active in the Red Hat Society, American Legion Auxiliary, the Birthday Club, and the Ute Quilting Club. She was a member of the St. Matthew Lutheran Church. In her later years, Elnora moved to the Prime Living Apartments in Sioux City and then to the Embassy Rehab & Care Center in Sergeant Bluff. 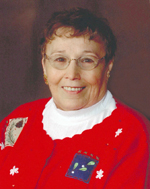