Services will be at 11 a.m. Saturday at the Meyer Brothers Colonial Chapel. The Rev. Ed Elliott, pastor of the United Methodist Church in Hornick, Iowa, will officiate. Burial will be in Graceland Park Cemetery. Visitation will be from 3 to 9 p.m. today, with the family present from 7 to 9 p.m. at the funeral home.

Mrs. Lyle was born Nov. 8, 1921, in Sioux City, the daughter of Henry A. and Genevieve L. (Moran) Seversen. She attended St. Boniface Grade School and West Middle School. She was an alumni of St. Mary's Academy in O'Neill, Neb. She was a homemaker.

She was a senior companion for the Aid Center of Sioux City and a longtime Red Cross volunteer.

Survivors include three daughters, Sharran and her husband David Ferleman of Franklin, Tenn., Linda Comer of Sioux City and Susan Claeys and her special friend Mike Teel of Hornick, Iowa; a sister and her husband, Gertrude and Ken Garver of Sioux City; five grandchildren, Scott and Jason Comer, Brian and Carrie Johnson, and Kris Abdouch; and three great-grandchildren. 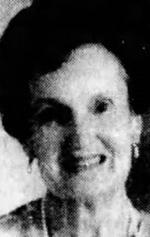