Member of One of Earliest Families Settling in Walnut Township

The death of J.S. Emerson at his home in Peru early Friday morning ended the career of a man prominently identified with Madison county for nearly 81 years. Mr. Emerson was the son of James and Mary Ann Emerson, one of the first families settling in Walnut township. He was born November 27, 1855, on the farm which his father homesteaded, and which he owned at the time of his death. His entire life was spent in Madison county, with the exception of a few months in Kansas.

Early in life he united with the Christian church.

He became one of the most extensive land owners in the county, at the time of his death owning more than 700 acres of land in Scott and Walnut townships. He was active and successful in business affairs, being one of the organizers, in 1899, of the Peru Savings bank.

He was married to Sarah Augusta Lilley on June 19, 1881. They were the parents of four children: a son Alonzo, who died in infancy; and Ralph, Earl, and Ethel, all living in Madison county.

Following the death of the first wife, he was married to Dulcie Weeks, on August 13, 1895. To this union a son was born, Gale Emerson. Mr. Emerson is survived by his widow, the four children, nine grandchildren, five great grandchildren, and three sisters.

Funeral services were held from the Ramsey-Richards funeral home in Winterset, Sunday in charge of Rev H.L. Olmstead of the Church of Christ. Burial was made at the Peru cemetery. 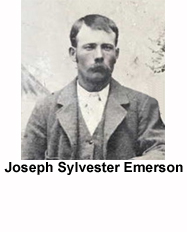