Betty Koehler, 89, of Winterset, passed away on February, 21, 2021 in Davenport, IA after a sudden illness.

At this time, no services are planned.

Betty was born on April 6th, 1931 to Oscar and Eathyl (Jones) Draman in rural Madison County, IA. She attended Stuart Schools and graduated in 1949. She was united in marriage to Richard Koehler on April 12, 1952 in Anaheim, California. She worked at Northwestern Bell in Des Moines and Winterset in the 1950s, until she decided to devote her time to helping her husband run his business and raise their children.

Betty enjoyed spending time with her family, gardening and reading. She especially enjoyed watching basketball, which she loved ever since she played six-on-six for Stuart High School.

She is survived by her sons, Douglas (Janet) Koehler of Bettendorf, and Rodney (Darin) Koehler of Aurora, CO; brother, Edward Draman of Waukee; sisters, Wava Robinson of Lincoln, IL, and Marjorie Wiebenga of Dexter; 2 grandsons; 3 great-grandsons; and numerous extended family.

Memorial contributions may be directed to the family for a later designation.

Online condolences may be expressed at caldwellparrish.com. 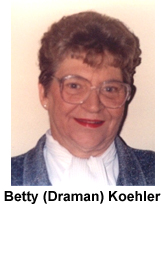