Mike was born on November 3, 1951, in Jefferson County, Iowa, the son of Milo and Gertrude (DOUGLAS) MESSER. After his father's death, his mother remarried to Stan LITE. He was united in marriage to Jane A. KROGMEIER on August 21, 1991, in Las Vegas, Nevada. Mike worked at the Mt. Pleasant Correctional Facility retiring in 2008. He loved his Gold Wing bike, meeting with his coffee buddies and with family and friends. He coached baseball for the Lockridge Little League and drove a school bus for Fairfield Community School District.

Mike is survived by his wife, Jane of Mt. Pleasant; his stepsons, Bob CARSON of West Point, Steve (Kalah) CARSON of South Carolina; his brother, Larry (Gloria) MESSER of Mt. Pleasant; his sister, Christine (Mike) WEINARD of Iowa City; his stepbrother, Robert LITE of Arkansas; along with nieces, nephews and cousins; and his aunt, Dorothy SAMS of Mediapolis.

He was preceded in death by his parents; grandparents; his brother, Terry MESSER; stepdaughter-in-law, Cindy CARSON; and a nephew, Ray MESSER.

Graveside services will be held on Monday, May 10, 2021, at 1:30 p.m. at the Chapel of White Oak Cemetery with Reverend Kenneth Messer officiating. Burial will follow in the White Oak Cemetery (note: in Henry Co., IA). Memorials may be directed to the St. Michael's Episcopal Church in his memory. Those wishing to attend the graveside service may meet at the Murphy Funeral Home in Mt. Pleasant at 1 p.m. to leave for the service.

Murphy Funeral Home of Mt. Pleasant is caring for his arrangements. 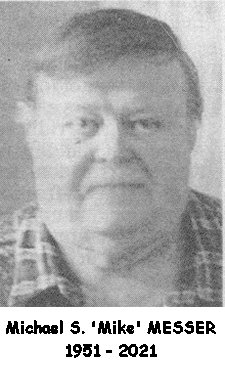