Earl Melvin SHEPARD, 75, of Fairfield, IA, passed away on Wednesday, April 7, 2021, at his home. As were Earl's wishes his body has been cremated. A time to celebrate Earl's life and share stories with the family will be held from 2:00 p.m. until 4:00 p.m. on Sunday, April 18, 2021 at the Fairfield Foursquare Church in Fairfield, IA. Memorial contributions in Earl's honor may be directed to The Multiple Myeloma Research Foundation (themmrf.org) or to the family to be used to support the many causes he held dear to his heart and may be mailed c/o Cranston Family Funeral Home, P.O. Box 189, Fairfield, IA 52556. Friends may leave online condolences at www.cranstonfamilyfuneralhome.com.

Earl Melvin SHEPARD was born on May 3, 1945, in New York, NY, to Benjamin and Sadye SHEPARD. He attended Jamaica High School where he graduated, with the Class of 1963. Shortly after graduation Earl married Bonita and attended the New York School of Technology. The two later divorced, and in 1980 he married Denise in San Diego, CA. This began a story that lasted over 40 years. Earl furthered his education and completed his Bachelor of Arts Degree in Business and Administration at San Diego State Univ. Earl was a dedicated firefighter to the City of San Diego for 32yrs and was Former Vice President of the Brothers United San Diego Firefighters. His heroism was recognized on numerous occasions. He spent a large portion of his life serving the people of San Diego as both a fireman and a member of the Board of Governors at the San Diego TM Center. Earl and Denise moved to Fairfield in 1991 where he continued his service to the community through projects with M.U.M., Mankind Project Int., Habitat for Humanity, and the Fairfield Rotary Club. Earl ran for County Supervisors of Fairfield and was the founder and CEO of Heavenly Homes, Inc.

Earl retired in 2006 as a Captain with the San Diego Fire Dept. He was musically talented and loved dancing and playing the guitar. He also enjoyed researching his family ancestry. If Earl had a choice for his free time it was fishing. He took every opportunity to wet a line at his favorite fishing holes. He was a loving husband, father, grandfather, great-grandfather, friend and businessman who will be deeply missed.

Earl was preceded in death by his parents; his first wife, Bonita SHEPARD; one sister, Delores VASQUEZ; a daughter-in-law, Maria SHEPARD; and a nephew, Joseph VASQUEZ. 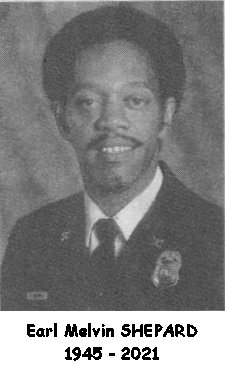