James H. DUNLEVY, 94, of Walker, Minnesota, formerly of Fairfield, Iowa, passed away April 8, 2021, at his home surrounded by loving family members. He was born in Hillsboro, North Dakota, July 17, 1926, son of James and Ovidia (THORSTEAD) DUNLEVY. He graduated from Fargo (North Dakota) Central High School in 1944, then immediately began service with the U.S. Navy at age 17 in World War II. Following the war, he made good on an offer to play football at University of Iowa, where he earned his pre-med degree in 1947. He resumed his studies at Washington University School of Medicine in St. Louis, earning his medical degree, as president of his class, in 1951. Following residencies at University of Iowa and University of Minnesota, in 1953, Dr. DUNLEVY established the Fairfield Clinic in Fairfield, Iowa, with two classmates, Dr. Jack Morgan and Dr. Chris Palchef. He provided medical care for the Fairfield community for 40 years until his retirement in 1993.

Dr. DUNLEVY married his sweetheart from junior high days, Allie Lu PHELPS, June 12, 1949. She preceded him in death in 2017. They were married for 68 wonderful years, raising three daughters, seven grandchildren and four great grandchildren. He was a loving, caring husband and father who was actively involved with his medical profession, family and community. Through the busiest years of his career, he always made time to attend his daughters' music and sporting events. He was a lifetime supporter of women's equality.

As a small town family doctor, he delivered over 4,000 babies, performed hundreds of operations and procedures, cared for multiple family generations and even made house calls. He always wanted to provide the best personalized care possible.

Dr. DUNLEVY not only advised his patients to become physically active to improve their health, he regularly 'tasted his own medicine'. An active participant in Fairfield's Park and Recreation programs, Dr. DUNLEVY routinely played flag football, basketball, fast pitch softball, tennis and golf. Often his teammates were half his age. He once looked around a softball diamond and realized he'd delivered everyone else on his team, as babies. He was known for having "the sharpest elbows" on the basketball court, and cherished the nickname, 'Dr. Dink' when playing tennis. Among his prized possessions are many trophies earned by various teams for winning league tournaments.

Faith was an important part of Dr. DUNLEVY's life. He was member of First Lutheran Church in Fairfield, and with his wife, established a scholarship for member youth to further their college educations. He was a member of Hope Lutheran in Walker at time of death. Dr. DUNLEVY served on many church-wide councils, committees, and task forces at the local, synod and national levels.

Other community activities involved Fairfield School Board (two-terms), Community Concerts, and Rotary International. A talented musician, Dr. DUNLEVY sang in his church choirs, and played a mean trombone in a Fairfield Dixieland band.

Dr. DUNLEVY and his wife retired to family property on the shores of Leech Lake, near Walker, Minnesota, in 2006.

He is preceded in death by his wife, Allie Lu; his parents; and sister, Lorraine NELSON. 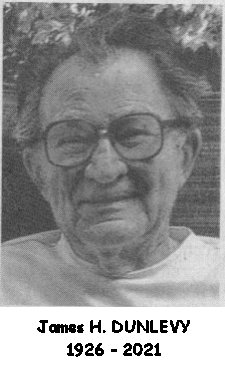