Norbert and Marie HAMMES have long been a model of commitment, and now they are the benchmark.

"I was floored when we got that news," Marie said. "I never thought we'd be the longest married couple in the state."

Children
The HAMMESes had seven children, all of whom stayed in Iowa, making it possible to hold regular gatherings with the whole family. The seven are, from oldest to youngest with the spouse's name in parentheses: Jim (Rita) of Fairfield, Rose BOLLEI (Dave) of Tiffin, Carol VORHIES (Dan) of Monticello, Steve [deceased], John (Rhonda) of Fairfield, Barb HAMMES (Jim DEUTSCH) of Fairfield and Mary WEBB (Tony) of Batavia.

Norbert and Marie have 16 grandchildren, 36 great-grandchildren (18 boys and 18 girls) and three great-great-grandchildren. Including the spouses, the HAMMES family contains 89 people. One of the things the couple is most proud of is being able to attend all of their grandkids' weddings.

The Ledger had the opportunity to speak with the six surviving children to gain insight into how their parents have lived so long (Marie will turn 100 in a few months, while Norbert is 106) and stayed married longer than any other couple in Iowa. They talked about their childhood of growing up on the farm 7.5 miles northwest of Fairfield and all the chores that farm-life entailed.

John said that his father is the most patient person he's ever met, that he never yelled at John once when he was a boy. Of course, Norbert did have to scold the youngster when he stepped out of line, but that was only after Marie coaxed him.

"Mom was the disciplinarian," John said.

Marie agreed with that assessment, adding that if a child wanted something from Norbert and the answer was no, instead of saying no, he'd tell the child to "see what Mom says."

"If I said something to Mom I shouldn't have, Dad took care of it," Jim said. "Dad was more of the disciplinarian. He made sure everything stayed on an even keel."

Rose said her parents taught their kids respect. a good work ethic and the importance of taking responsibility for their actions.

"If our neighbors needed anything, Dad was always the first one to drop everything to help, and Mom did, too," she said.

Barb recalled in instance when her parents met a homeless person walking on the street. Norbert invited the man to eat pancakes at church.

"Being around them makes you realize you want to be like that," Barb said.

Farm
Mary talked about how she would come home from school to see 15 loaves of bread on the kitchen table that her mother had baked earlier that day.

"We'd have a table full of noodles and Angel food cake, too" she said.

Mary remembers the family's big garden and fruit trees, gathering eggs and butchering chickens, and doing it all barefoot no less.

"We got to watch cartoons, as long as we were churning butter while doing it," Mary said.

"Dad would walk out onto the porch, and if it looked cloudy, he'd tell us to stay home," Marie said, noting that her means of transportation to school at the time was a pony.

John talked about how Norbert and Marie were ahead of their time in employing state-of-the-art technology.

"The farm they bought in 1946 had a wind charger with batteries in the basement to store electricity," John said. "It also had a water supply tank mounted above the ground 20 feet, so they had a complete pressurized water system on the farm. Renewable energy was there 70 years ago."

Health
The children were asked if Norbert and Marie have been health-conscious, such as in how they eat and their forms of exercise. Jim said working was the main exercise for them and most people of their era, and that the family ate foods that are considered a "no-no" today, such as frying food in lard. Carol and Mary agreed that while their diet might seem old-fashioned, it was notably free of the kind of preservatives that are ubiquitous in the fast good and boxed food of today. They think that has played a role in their excellent health.

Jim also thinks genes play an important role in explaining how his parents are still so spry.

"[Norbert's] dad was in his 90s before he passed, and Marie's mother lived a very long time, too," he said.

Secret to success?
Several of the children told The Ledger that they believe the couple's faith is responsible for their marital longevity.

"My parents taught us to be God-fearing adults," Barb said. "They instilled in us the importance of going to church."

"I think their secret is their faith that God will provide for what is needed," Carol said. "They've always worked hard for everything they got on the farm. They did their own butchering, and Mom did the sausage. It was hard living, but they enjoyed it and made the most of it."

John said his parents have been terrific role models. He remembers times when a neighbor needed help, and Norbert could have been in the middle of the field, and would still drop everything to lend a hand.

John also spoke about his parents' piety and how they adhered to the Bible tradition of resting on the Sabbath.

Marie chimed in, "If not for our Lord, none of us would be here."

Just as their children praised them for being great parents, Marie and Norbert said their kids have been the ones who've guided them.

"Our children are so lovable," Marie said. "I've heard of people not talking to their siblings, and I just cannot imagine that. We have a wonderful family, and I love all my kids' spouses. I don't know how we came to be so lucky."

A relationship cannot survive unless the two parties love and respect one another, and that is evident in the HAMMESes' case. They said that, no matter if they've had a disagreement during the day, when it was time for bed, they kissed goodnight.

As an example of their affection, Marie has kept a poem from Norbert from the time the two were dating. it was written in 1938, two years before their marriage.

The letter reads:
---
Years may pass, sorrows may fly
Many a hope may wither and die
Many a sun may rise and set
But you I never shall forget.
Your friend, Norbert
---

Carol said she had no knowledge of that poem until Marie showed it to her a few months ago.

"I thought that was pretty awesome Mom had kept it all these years," she said, who remarked that it was fun to see a side of her dad she hadn't seen before.

If Carol had to describe her parents in just a few words, she'd say of her father that he is "honest, true to himself and those around him," and of her mother that she is "an excellent baker, who took care of her family."

In the HAMMES family photo below: Norbert and Marie HAMMES, seated, reminisce about life on the farm with four of their children who came to visit them last week at their residence in SunnyBrook Assisted Living in Fairfield. Their children pictured are, from left, Barb HAMMES, Mary WEBB, Rose BOLLEI and John HAMMES.

In the linked photo, Norbert and Marie show off their playful side as they dress in Steampunk attire in accordance with the theme of Fairfield RAGBRAI 2019. The couple was awarded a certificate for being the longest married couple in Iowa at 78.5 years and counting. 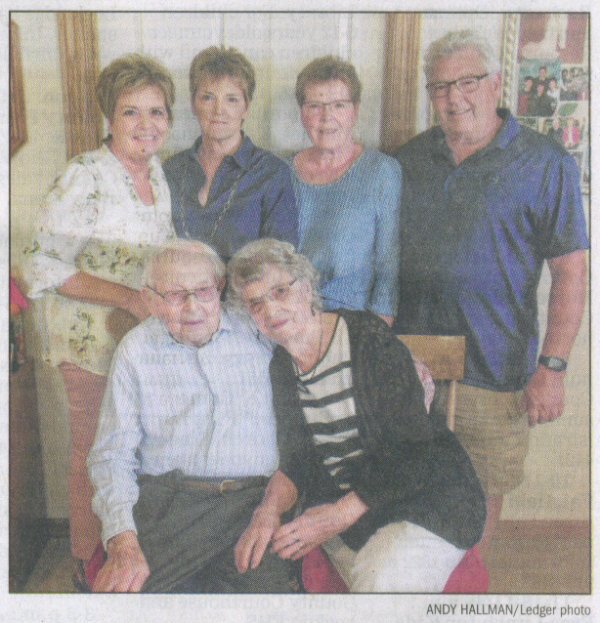