Several businesses around the Fairfield square are remodeling their storefronts, and the result has been a window into the past.

The building on the east side of the square south of the alley is among those receiving a facelift. Its façade has been torn down in the remodeling process, revealing the old storefront signs beneath. Among those that are visible are Zillman Furniture and the Jefferson County Extension Office.

The storefront north of Zillman Furniture, right on the alley was Western Auto Associate Store, though its sign is not visible. The second floor of the building, where Morning Star Studio is now, was once the home of the Veterans of Foreign Wars.

Fairfield city engineer Melanie Carlson said in an interview this week that the old signs now visible are made from or on a material containing asbestos. For them to be removed and put in a museum, for instance, would require abating the asbestos.

The Mayo Clinic reports that prolonged exposure to asbestos can cause scarring of lung tissue and shortness of breath.

The owners of the building, Brian and Jewel McDonald, and the architect of the downtown façade project agree they will not move the old signs, but would rather cover them with cement board. The public will no longer be able to view the signs, but they will be preserved. Carlson said future generations might discover more efficient ways of containing asbestos, and at that time the signs could be removed and put on display.

Zillman Furniture was owned and operated by Carl and Mary ZILLMAN. According to a story in The Ledger, Carl purchased the store in the mid-1950s from Dan Humeston, and ran it until 1974 when he sold it to Fairfield resident Max Van Gorp. At the time Van Gorp was running the Harrison's Variety Store.

ZILLMAN began his career in retail with Gamble Stores in 1932. He retired having spent 42 years in the business. Carl was a native of Lockridge and Mary was a native of Fairfield.

Fairfield resident Dick Reed was the ZILLMANs' neighbor when they lived on East Broadway Avenue near Forest Park.

"Carl was a very frugal person, but he was generous, too," Reed said. "He made a sizable donation to Jefferson County Conservation when he passed way." (sic)

Reed also had a story to tell about the shop next door, Western Auto.

"I bought my first lawnmower there when I was in fifth or sixth grade," he said. "I bought it on time, and I think I paid $2 per week. It was my first experience in business. I felt like I didn't make a penny after paying for gas."

ZILLMAN served on the Jefferson County Conservation Board for 18 years, a level of dedication that earned him the nickname "Mr. Conservation." ZILLMAN received the prestigious Lawrence and Eula Hagie Heritage Award for outstanding service to the environment in 1963.

Within a few years of ZILLMAN joining the board, he helped secure 117 acres of land from the Fairfield Chamber of Commerce Development Corp. and turned it into what is today Jefferson County Park. The ZILLMANs donated 46 acres of their own timberland to the conservation board to create an outdoor recreation area and wildlife sanctuary known as Zillman's Hickory Hills, located 3.5 miles southeast of Fairfield on Glasgow Road.

George HEMM owned and operated Western Auto for many years in the mddle of the 20th century. He began working at the store in 1946, and eventually obtained full ownership before selling it in 1970.

When HEMM began working for a Western Auto branch in Des Moines in 1929, the company's major items were Model T side curtains, fenders and 3-by-33.5 tires.

The Ledger ran a story about the business's sale on Sept. 11, 1970, which reported that the buyer of the business wished to remain anonymous. Management of the store was assumed by Clyde DIMMITT, who had worked at the store for 19 years. At the time, DIMMITT promised to update the store with new lighting, air conditioning and a drop ceiling.

Later, the identity of the owner was revealed to be William Kidwell of Huntington, Indiana. In 1975, Mel and Judith WHITMORE purchased the business from him. A Ledger article from that year indicated the store had undergone extensive interior remodeling, and that its general line of hardware had been expanded to include appliances, paint, electrical supplies and sporting goods. The Ledger reported that DIMMITT would remain as manager, and that the WHITMOREs would continue to operate their electrical business, Whitmore Electric, in their new building.

Judith said the couple remained on the east side of the square until 1982, when they opted to sell their Western Auto merchandise and move into a building on West Grimes Avenue. Thereafter, Mel focused exclusively on electrical work until his retirement in 2000.

"When we bought the store in '75, it was making money. The store was very prosperous," Judith said. "When Walmart came to town in about 1980, it hurt us."

Judith said she's disappointed no signage remains on the east side of the square indicating Western Auto was there.

A history of Jefferson County's 4-H program indicates that the extension office moved multiple times before landing at its current location on West Burlington Avenue. In 1955, the office moved from 300 N. Main Street to the northwest corner of the square.

Four years later, the extension office moved again, this time to the east side of the square. It rented space from the VFW in space previously occupied by Cole Grocery Store.

According to the "History of Jefferson County 4-H," it was a welcome move from the second floor office space on the northwest corner of the square.

"Now everything was easy access, more office space and a meeting room that clubs could use for their meeetings," the report said.

Stan STOVER was hired to be the Jefferson County Extension director in 1962, assuming the duties previously held by Myron Wormley, who had been the extension director for five years. STOVER was a native of Whitten, and had earned his degree in animal husbandry from Iowa State University in 1950. His education had been postponed by a three-year tour of duty in the Navy during World War II.

STOVER stepped down as extension director in 1985. Reflecting on his years as director, STOVER told The Ledger in an interview that year, "When I started 23 years ago, people were just talking about cultivators, crop rotation and contouring were just coming into being. Corn-bean intensive row cropping was not strong, and chemicals were just coming into use."

Typical yields quadrupled during STOVER's time as director. He observed that the usual layout of a farm - one plot for corn, one for oats and two for meadows of clover hay - changed to one where farmers planted corn and beans exclusively, alternating the crops each year.

Jefferson County 4-H named an award after STOVER. To earn the award, recipients must have been a member of 4-H for at least five years, completed a record book for every year, exhibit leadership skills and promote 4-H outside their own club.

"He liked helping kids and doing what he could for them at the fair," she said.

Photos that ran with the story - 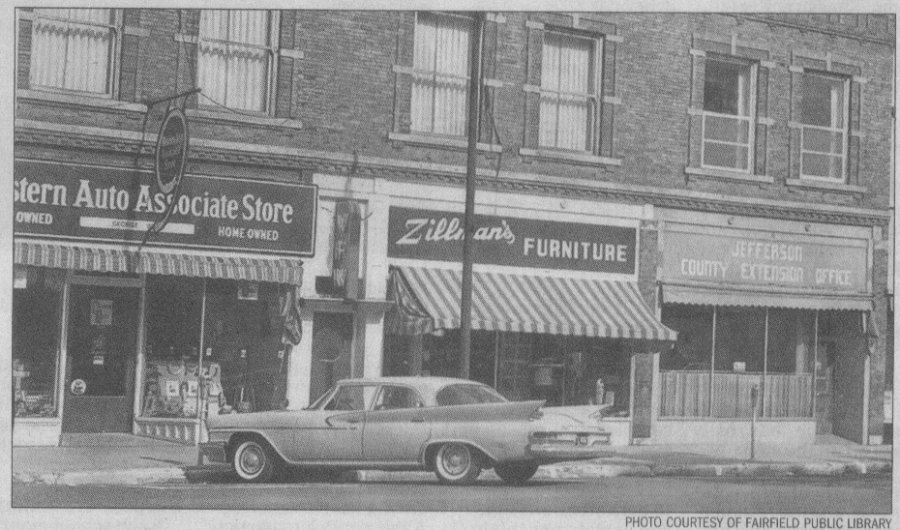