A new foundation has been started to honor the memory of a local teacher and to promote excellence in education.

Druzilla F. CLARK was a lifelong resident of the community and a teacher with 47 years of experience in the Fairfield and Cardinal school districts. The foundation's board of directors elected to name their new foundation after CLARK, and will present its first monetary awards June 2. The board consists of president Ralph Messerli, secretary/treasurer Linda Booth and director of public relations Gloria Countryman.

The foundation began thanks to a donor who had CLARK as his elementary teacher many years ago. The donor wishes to remain anonymous.

"This young man got closely attached to this teacher, and they stayed connected through his school years and on throughout his life and career," stated a press release from the foundation. "She helped him so much throughout his life that before she passed away, he promised to do something very significant in her name to help other educators become successful and significant in the lives of their students, as Druzilla did with him."

The donor said his goal is to "seek out and promote high-quality educators in both the Fairfield and Cardinal schools that our students need and deserve."

The release stated that the foundation is not just about honoring CLARK, but also about honoring today's dedicated teachers, encouraging them to achieve excellence and reminding them that "Teachers are on the front lines of our future."

The DFC Educators Foundation will award up to $30,000 to first-year teachers who complete their contract year with either Fairfield or Cardinal school districts. Each "Teacher of the Year" in both districts will receive an additional $1,000 for outstanding service.

The awards will take place at 4 p.m. June 2 the Elm Grove School House at the Jefferson County Fairgrounds. A social hour at Fairfield Golf & Country Club will follow the awards ceremony, and then dinner will be served at 6 p.m. The awards ceremony and evening event are open to the public.

Those who wish to eat dinner must register in advance, no later than Wednesday, by calling Countryman at 472-9041.

By establishing this educators foundation, the donor hopes encouraging teachers will be a community-wide effort.

Information about the DRF Educators Foundation can be found at dfclarkfoundation.org.

CLARK graduated from Parsons College in 1925 at age 18. She began her teaching career at the Elm Grove District No. 4 school, a one-room schoolhouse that once stood northwest of Fairfield before it was relocated to the fairgrounds. CLARK taught in both Fairfield and Cardinal districts from 1925 until her retirement in 1972.

In the schoolhouse photo linked below Druzilla Clark's picture: The board of directors of the Druzilla F. Clark Educators Foundation stand outside Elm Grove District No. 4 school at the Jefferson County Fairgrounds. Board members are, from left, Gloria Countryman, Ralph Messerli and Linda Booth. Clark taught at the one-room schoolhouse pictured when it was located northwest of Fairfield. 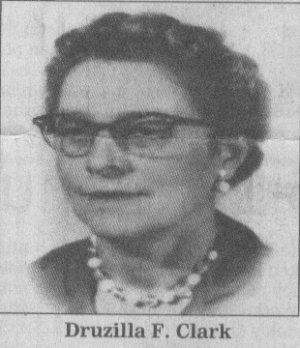