"LOUDEN was a very important part of the agricultural and industrial fabric of this community," said Mark Shafer, curator for the Carniegie Historical Museum.

However, it could be said that Louden Machinery Company -- which began in Fairfield in the mid-19th century soon after its founder William LOUDEN patented a hay carrier in 1867 -- is stitched into the world's agricultural and industrial fabric. His overhead monorail system is still used today in the material handling technology industry.

"By 1930, the Louden Machinery Company had custom designed 18,000 barns on every continent except Antarctica -- and still millions of farmers bought their products," Shafer said.

"LOUDEN revolutionized agriculture, making it easier for farmers to farm ... anything out there from barn or livestock use, it's possible LOUDEN had something to do with it," Luedtke said. "There were other companies that produced similar equipment, but LOUDEN was generally thought of as a leader."

With the unveiling of a mock-barn Oct. 8, the Carnegie Historical Museum will pay tribute to a company that helped put Fairfield on the map for more than a century.

Shafer initially had the idea for the barn.

"We had so many LOUDEN artifacts, such as catalogs, company correspondence, blueprints, pulleys and hay carriers," Shafer said. "We had a lot of it on display but it wasn't displayed properly."

"We had so many different items of equipment, we wanted to make a display were people could actually touch things, rather than it being behind glass," Luedtke said.

However, the item just sat on a table in the museum for the last 20 years.

Now, Shafer said the hay carrier is properly displayed as part of the LOUDEN barn exhibit in a shadow box made from rough-sawn walnut.

"My dad, Keith, sawed those boards on his sawmill several years ago, we had it stockpiled, and we were able to make the shadow box for the hay carrier," Shafer said.

The museum board enlisted the help of local carpenter Todd Brown who fabricated the entire design of the mock barn.

"He adapted the LOUDEN rafter system, and that's what we used to actually build the roof," Shafer said. "The barn is big enough to park a Model-T or a Volkswagen Bug inside -- it's 12 feet tall at the peak, and could comfortable fit (sic) about 10 people inside."

The barn was built around a stanchion (a frame that holds the head of a cow in place), a LOUDEN drafting table and a large lit custom oak cabinet, which was repurposed for the display.

"Todd cut it down to the size we needed," Shafer said of the cabinet.

Shafer said a collection of three-decades of LOUDEN correspondence, ranging from children's letters, to letters to President Franklin D. Roosevelt is stationed inside the cabinet for museum patrons to view.

"The collection was donated by David McCoid of Mt. Pleasant. He was the grandson of RB LOUDEN, who was a long time president of the company and William LOUDEN's younger brother," Shafer said.

Shafer said many of the pieces in the display were donated from various community members.

"The stanchions were salvaged from Dayton and Alice Small's barn," Shafer said adding that museum board member Chris Small orchestrated the donation of various materials from the barn that her husband and his brothers planned to tear down after it fell in disrepair around five years ago.

"An original door and handle were donated from our farm building," Small said.

"The hinges in the barn on the hay mow door, actually belonged to William LOUDEN," Shafer said, adding that his grandfather purchased a portable tool shed from William LOUDEN's brother RB LOUDEN in the 1930s.

When the tool shed fell in disrepair, Shafer said his uncle, Floyd Shafer, saved the hinges.

Luedtke also donated various items from his own LOUDEN collection.

"I donated a salesman sample of barn-door hangers, a special wooden cement mold for under the stanchions, and several rollers for barn doors and packing material," he said.

Shafer called the LOUDEN exhibit a compliment to the working displays at the Maasdam Barns.

"They have the real deal, but it's nice to have the compliments," Shafer said.

Although the actual unveiling is from 5-7 p.m. Oct. 8 during the Fairfield Area Chamber of Commerce's Business After Hours, Shafer said the LOUDEN exhibit would be open from noon to 5 p.m. to honor Tom LOUDEN, who recently passed away.

"Tom LOUDEN's funeral is Friday and we will have the museum open in his honor," Shafer said. "He has a lot of family out of town and out of state and that will give them a chance to see the exhibit."

"He remembered going to 'Uncle Will's' funeral when he was 9 years old," Shafer said. "Tom was able to view the installation twice. He got to see it with the rafters and the roof up. It was about 75 percent completed."

The LOUDEN barn exhibit is on the third floor of the museum, the former Fairfield Public Library.

Photo of the LOUDEN Hay Carrier, from the front page --
http://iagenweb.org/jefferson/General_Interest/2015/LoudenHayCarrier.jpg

Photo of the LOUDEN exhibit, from "The Fairfield Ledger" of Thursday, October 22, 2015, Page 7 --
http://iagenweb.org/jefferson/General_Interest/2015/LoudenExhibit.jpg 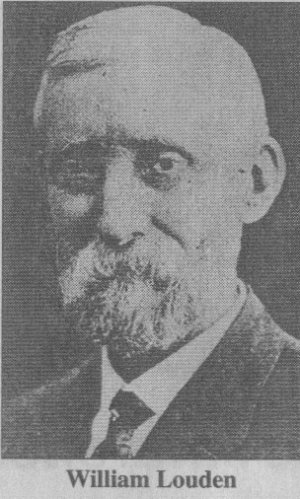