The First Baptist Church in Fairfield has more than one reason to rejoice this weekend. Not only are the church's members celebrating their Terquasquicentennial, they have welcomed a new pastor.

The Rev. John Kermott accepted the call to serve First Baptist and moved with his family to Fairfield on Saturday. He headed services at the church for the first time Sunday, making him the 47th pastor to lead the local Baptist congregation since 1840. He succeeds the Rev. James Wotherspoon who retired in 2013.

Kermott's hiring marks a continuation of the church's storied history, which began 175 years ago. The history of the church dates back to 1839 or 1840 when a small group of people who adhered to the Baptist faith moved into the territory, which is now Jefferson County and organized a Baptist church. The charter members, as recorded in 1844, consisted of 11 persons, most of whom were reported to come from Huntington County, Pennsylvania. Initially, meetings were held in various places, including the court house, Wells Hall and North End School.

In 1865, the church's building committee was instructed to buy the lot known as the Bickford lot in the west part of town and proceed at once to build the Lecture Room. This little brick building was built on the north end of the lot where each succeeding Baptist church has been built. The church continued to make use of this building until 1876, but baptisms were held in the Christian church.

During the 1860s and 1870s, the church faced difficult obstacles. As is often the case in churches even today, the chief difficulty seemed to be securing the financial support of its members to keep the church running. The church's early meeting minutes indicate that as a result, many of its early pastors were forced to resign because the church was failing to pay their salaries which ranged from $500-$700 annually.

In spite of struggles like this, the church also experienced times of great joy and revival. It was reported that in May of 1866, an eight-week revival resulted in the addition of more than 40 new members to the church. In 1874, an even greater revival occurred, and the church historian recorded that "there was nightly conviction and more than a hundred came forward seeking salvation."

Construction of a new church

It was after this great revival that church members voted unanimously to build a new church. It took two years of saving before construction could begin. When the balance of the building fund was finally deemed sufficient, a contract was signed to build the new house of worship for $5,175 and build a new parsonage for $700. That parsonage was home for many Baptist ministers and their families through the years.

After the new church and parsonage were built, the church continued to struggle financially at times. At one point, the church was even put up for sale so its members could pay off $3,500 in building debt. The congregation held a special prayer meeting. It is noted in the church history that during this meeting, the people prayed fervently that God would give them the faith to say to the mountain before them, "Be thou removed." Over the next two days, the entire amount of the debt was raised and the building was paid off.

Eleven years later, the church would face additional adversity. In February, 1889, in the middle of a revival, the church was completely destroyed by fire. Plans for a new building were begun immediately. After much sacrifice on the part of the pastor and people, a new house of worship was dedicated on Sept. 26, 1890. This church remained until its demolition in 1991 when the present sanctuary was built.

Financial woes continued to plague the church for the next few decades. Often pastors only stayed for one or two years. But in 1920 the church held a jubilee feast to celebrate payment of the last penny of church debt. The note and mortgage were burned in a joyful ceremony.

As time went on, the church became involved in community affairs, taking a stand in an effort to close the swimming pool on Sunday and to not permit Sunday movies. A "soup kitchen" was organized which fed needy children of the community one meal a day. This was known as the Good Will Kitchen, and ladies of the church canned large quantities of food in the summers to donate to the effort.

The church continued to grow. In 1953, the Rev. George Meyers was ordained, the church entertained two missionary speakers, and mission giving increased 60 percent over the previous year. Sunday school attendance averaged 164. In 1955, a long-range building project was accepted and a building fund drive was already in place. By the time ground was broken for the educational unit/fellowship hall in 1957, $12,000 had been pledged and additional $10,000 had been borrowed from Jefferson Building and Loan Association. That note was paid in full in 1975.

In June of 1969, the Rev. Jim Stumbo became the 42nd pastor of the church. Under his leadership, parishioners began to take communion to hospital and nursing home patients, greater lay participation in worship services was approved, and a kitchen was built in the east of fellowship hall adjacent to the pastor's study. In 1971, the church voted to rent the fellowship hall, kitchen, and basement restrooms to the Community Childcare Center. In 1973, the old basement was rented to Tenco Industries for one year.

A year later, Rev. Lynn Bergfalk was called to become the church's pastor. During his first year of ministry, the church approved an extensive renovation project. A new roof, restoration of the bell tower, new front doors, and much work on the sanctuary interior was completed. A dedication service was held on Sept. 28, 1975 commemorating the 85th anniversary of the church building. The educational unit was also reroofed in 1975.

That same year, the church helped three Burmese refugee families resettle in Fairfield, and they became active members of our congregation. In 1980, the church family grieved when the Yang family, Laotian refugees that the church sponsored and brought to Fairfield, suffered the loss of one of their children at the hand of his mentally disturbed father. It was a very dark time for the church, but those who were members of the church at the time said the event also served to unite the congregation as one body as they sought comfort and direction from the Lord.

Rev. Jim Battey was installed as Bergfalk's predecessor in February 1981. During his tenure, a series of summer youth interns were employed, giving a big boost to the church's youth programs. At that time, two discipleship groups involving 21 people met weekly for over two years. Pastor Battey pursued a D.Min. degree; the church helped to settle a refugee couple from Romania, and the congregation set a lot of goals during this time.

The church received a monumental blessing in 1982 and 1983 when it was named one of the heirs to the Ida Rice estate. The church received approximately $167,000, of which 25 percent was distributed to various mission projects. In April 1984, members voted to earmark the remainder of the money as a building fund for a new sanctuary. A building planning committee was formed and began working on plans to present to the congregation. It was during this process that in July of 1983, the congregation voted to ask the Community Childcare Center to find another location to provide childcare.

Early in 1988, Rev. Jim Battey submitted his resignation to become pastor of a church in Omaha, Nebraska closer to family.

After serving a few months as the church's interim pastor, Rev. John D. Boatman accepted a call to become the church's permanent pastor. Building plans for the new sanctuary went forward. The church purchased the house and lot adjacent to the church to provide a place for additional parking. The building planning committee recommended the new church be built at the present location and an architect was hired. Members voted to accept a bid of approximately $761,000. The old sanctuary was demolished in May 1991 and new construction was begun. The new sanctuary was dedicated in a special ceremony in August 1992. A loan was finalized in the amount of $286,000 with First National Bank.

The structure and organization of the church government underwent a major change in 1993, which required some constitutional revisions. Instead of the Deacon Board, the church adopted a form of leandership whereby a church council would be the governing body.

When Rev. John D. Boatman left in 1994 to become the pastor of a Baptist church in Quincy, Illinois, the church again began the process of finding a new pastor. Rev. Jim Wotherspoon accepted that call in July, 1995, when he and his wife, Betsie, and their four children moved here from Columbus, Nebraska. During his tenure at the church, many things were accomplished. In 2003 the church completely remodeled the fellowship hall to make it much more attractive, more energy efficient, and to improve acoustics. In May of 2006, the building loan for the new sanctuary was completely paid off -- almost six and a half years ahead of schedule.

In June of 2006, the extended a call (sic) to Chris Paul to serve as the associate and youth pastor. Since that time, youth programs have grown in numbers and in depth. In September of 2007, the church took on a new challenge and began an AWANA program on Wednesday nights. The church has seen a steady increase in both the number of children attending and the volunteers offiering their help.

The congregation voted to completely remodel the church kitchen in 2006. This has allowed for the easier preparation of meals for special events, funeral dinners and night youth meals. Wednesday meals have brought families together before Wednesday night services begin.

In addition to these activities, the church continues to have Vacation Bible School each summer and year-round Sunday School for all ages. The church choir provides special music every Sunday during the school year.

Several years ago, about thirty church members served on a mission trip to Washington, D.C. where they worked at an inner-city summer childcare facility. In 2008, church members served on a mission to an orphanage in Oklahoma, and Pastor Chris Paul has taken the youth on a few mission trips as well. Our church has been an active supporter of Forest Lake Camp south of Ottumwa and plans to continue to help maintain the camp as it has provided a church camp experience for Baptist youth for several decades.

Earlier this week, new pastor Kermott was unpacking books in the church office, poising himself to lead the church into the future.

"As we look back at our history, the picture I have in my mind is one of looking in a rear view mirror. We want to look back, but we also know that the real task is to keep driving forward," Kermott said.

To commemorate the 175th anniversary, the church will host festivities all weekend, starting Saturday morning at a shelter near the pond at Jefferson County Park. The shelter has been reserved from 10 a.m. to 10 p.m. for use by parishioners, former parishioners and others who want to join in the all-day celebration. Activities at the park include fishing, hiking and playing volleyball and baseball. Playgrounds are available for children.

An official celebration will begin at 3 p.m., with games for people of all ages coordinated by Sarah Steimsma. At 5:30 p.m., a potluck meal will be served. After dinner, a praise and worship service will be held. The celebration will wrap up Sunday during the regularly scheduled Sunday school and church services. 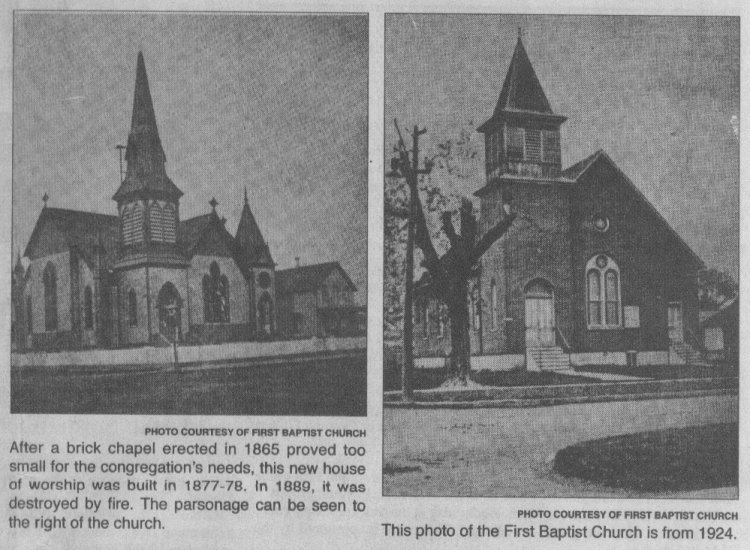