Roy MITCHELL of Packwood will celebrate his 100th birthday from 2-4 p.m. Saturday at SunnyBrook Living Center.

The celebration is being hosted by his children, including Steve MITCHELL and wife Karyn of St. Charles, Illinois, Michael MITCHELL of Batavia, Rob MITCHELL and wife Lori of Fairfield, Julie MITCHELL-CRAIG and husband Don of Marion. He also has two grandsons and one great-granddaughter.

Mr. MITCHELL requests no gifts, but cards would be welcome.

Mr. MITCHELL was born Aug. 22, 1914, in Hedrick. He and Ruth have been married for 68 years. He farmed until five years ago, and is a fan of St. Louis Cardinals, Iowa Hawkeyes and Pekin Panthers.

Aaron MITCHELL, 32, fondly remembers his grandfather's stories, especially the one about him driving his horse-drawn carriage to church on Sundays.

"My grandfather told so many great stories," Aaron said.

However, Roy MITCHELL's telling of great stories isn't that surprising, considering they cover a century of living.

MITCHELL's family donned T-shirts with slogans such as "My dad is 100." Or as in the case of his wife, Ruth MITCHELL, "My husband is 100."

The well-wishers continued pouring in long after the onset of the party.

David and Marilyn Fenton of Fairfield were in attendance and said they couldn't say exactly how long they'd known MITCHELL. "Maybe 30 or 40 years," Marilyn said.

But when asked how they felt about their long time friend reaching such a milestone, David responded with, "We've been expecting it for a while."

The newly minted centenarian served and was injured in World War II, which included fighting in the "Battle of the Bulge." After marrying and raising his family, MITCHELL maintained his farm until the age of 95.

"The story of his life is amazing; what he did for his country in World War II and his commitment to his community, it's just amazing," said Roy's daughter-in-law Lori MITCHELL. "There's a lot of story there."

With a background of patriotism and military service, it's nothing short of fitting that MITCHELL's only great granddaughter, 13-month-old Aurora RUNESTAD-MITCHELL of Burlington, North Carolina, was born on Independence Day.

MITCHELL was born in Hedrick and his family moved to a farm near Packwood when he was 7. After he graduated from Packwood High School, he served in the military and upon returning to the states, he married Ruth, who was a teacher.

Among Saturday's attendees was Fred Wells of Packwood.

Wells, 73, remembered a young Ruth MITCHELL, his first grade teacher who "got after him a time or two," when he was only 5.

"She remembered me," Wells said.

"It's quite an accomplishment," Steve said. "We're glad that both of them have enjoyed such a good life."

Steve's wife, Karen chimed in. "Obviously, it's not every day that someone turns 100."

Steve said his grandfather, Roy's dad, lived to be 96 and his mother Ruth MITCHELL will be 95 in November.

Brandi Logli, executive director of SunnyBrook, said the facility was excited to be a part of the birthday celebration.

SunnyBrook donated cakes and decorated the center for Saturday's festivities.

"We were happy to do it," Logli said. "The MITCHELLs are sweet, compassionate and very humble individuals."

Marilyn and her husband, Warner Green, also met the MITCHELLs at SunnyBrook.

Roy's oldest grandson Matt said he feels "lucky" to have his grandfather.

"I feel really lucky that he's been around this long and that he's in good health," he said. "I have so many good memories of being on the farm."

Ruth said, "It's pretty wonderful that he's lived so long."

The couple has been married for 68 years.

When asked how he felt about the turnout for his birthday party, Roy just smiled and said, "It's been overwhelming."

Photos that ran with this story can be viewed by clicking on the links: 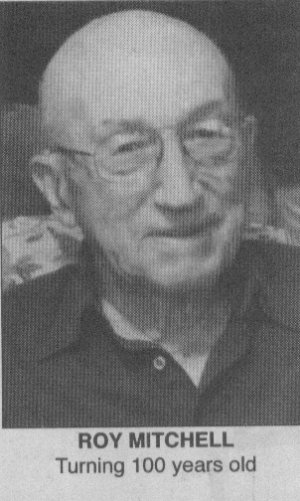