BATAVIA -- The DALLNER family of Jefferson County harvested its final crop this fall after farming continuously in the county for more than 160 years.

Steve and Diane DALLNER live on a farmstead 6 miles north of Batavia, and were the most recent members of the DALLNER family to farm in the county. However, those days are now history since the DALLNERs sold almost all their farming equipment at an auction Dec. 18.

About 200 people registered for the auction in person and another 130 registered to bid online. Online bidders participate by being able to see a picture of the item and listen to a live audio feed from the auction. They could bid against the people in attendance with the click of a mouse, and their bid would be relayed instantly to the auctioneer.

Steve and Diane kept a few of their tractors but sold everything else such as their finishers, plows, combines, augers, bailers and more. Steve said he was impressed with the number of people who bid online, and by the number of people from out of state who showed an interest in his equipment.

"We were blessed with a beautiful day for the auction, and we had a nice day afterward to load the machinery before the weather got bad," Steve said.

Although the machinery is mostly gone, the DALLNERs have no plans to leave their farmstead. Steve owns 500 acres and farmed 500 on top of that while he was in the business. He said his plans are to lease the land and enjoy retirement with his wife, who retired from her job last January.

Steve grew up on the farmstead he calls home, but he did not always farm it. After graduating from college, he taught middle school special education for nine years in the Cardinal School District. However, Steve's father Vern passed away in 1981, leaving a question mark over who would assume control of the farm. Steve decided to leave his job in teaching to keep the farm in the family.

Farming has changed dramatically since Steve and his brother Roger were performing chores on the farm, and has changed quite a bit even since 1981.

"When I started, I was using my father's equipment," Steve said. "Our big tractor was 120 horsepower and two-wheel drive. Now, the big tractor I just sold was 275 horsepower with front assist."

Steve recalled he inherited a 15-feet grain platform from his father and that the one he just sold at auction was 25 feet wide.

He said modern farming techniques allow farmers to maximize their yields on every acre of ground they own. He mentioned the planters and combines that have "auto-steer" in which a computer controls the vehicle's turns based on a satellite telling the implement where it has already been and where it needs to go.

Steve remembers mowing with an Allis Chalmers accompanied by his brother when they were 12 to 14 years old. One boy steered the tractor while the other one worked the brakes and the hydraulics that controlled the sickle bar.

The boys and their older sister Linda helped their parents farm through school while occasionally working off the farm.

"When I went to college, we would come home on the weekends to help dad, and we helped him sometimes during the summer," Steve said. "The older we got, the further we got from the farm. When I was teaching school and living in Batavia, if my dad ever got in a pinch he'd call me to help him out, so we always maintained a connection to the farm."

Wilma WHITHAM is Vern's sister and is a life-long Jefferson County resident. She was born in 1927 and recalls that her family used horses in the fields when she was a little girl. She said it was probably not until the late 1930s or 1940s that her family obtained an Allis Chalmbers (sic) tractor to replace the horses.

WHITHAM was just a few years old when the Depression hit. Despite the rough living conditions on the farm, WHITHAM never felt like she or her family were deprived.

"Looking back, I can see that we were," she said. "We did not have electricity or running water. They had electricity in town but we didn't on the farm. We used kerosene lamps."

WHITHAM rememers having to clean the chimney everyday to prevent it from filling the house with smoke.

WHITHAM's father Espy served in World War I and returned to the States to farm. After their children were born, Espy and his wife Hattie bought a 160-acre farm 3 miles northwest of Glasgow. Although WHITHAM and her family were able to weather the Depression, her grandfather Fred was not. Fred lost his farm and had to move to Fairfield to find work.

Fred and his brother George were the first in the DALLNER family to settle in Jefferson County. From what WHITHAM has been able to discover through her genealogical research, Fred and George began farming in the county in 1846, and might have farmed in Henry County shortly before then. Their Jefferson County farm was near Germanville, which was fitting because their mother and father came from Germany.

Fred and George are the children of Phillip and Effie, both of Bavaria. Phillip was born in 1792. The couple came to America on a sailing vessel in 1836. They arrived in New Orleans and moved to Higgentown, Pa., to live near the Pennsylvania Dutchmen before making their way to Iowa.

WHITHAM believes all four of Phillip and Effie's children were born in the United States and that they probably grew up speaking English and not German. She said her family rarely spoke of Fred or George or their sisters Ann and Rita, so little knowledge remains of what they were like. 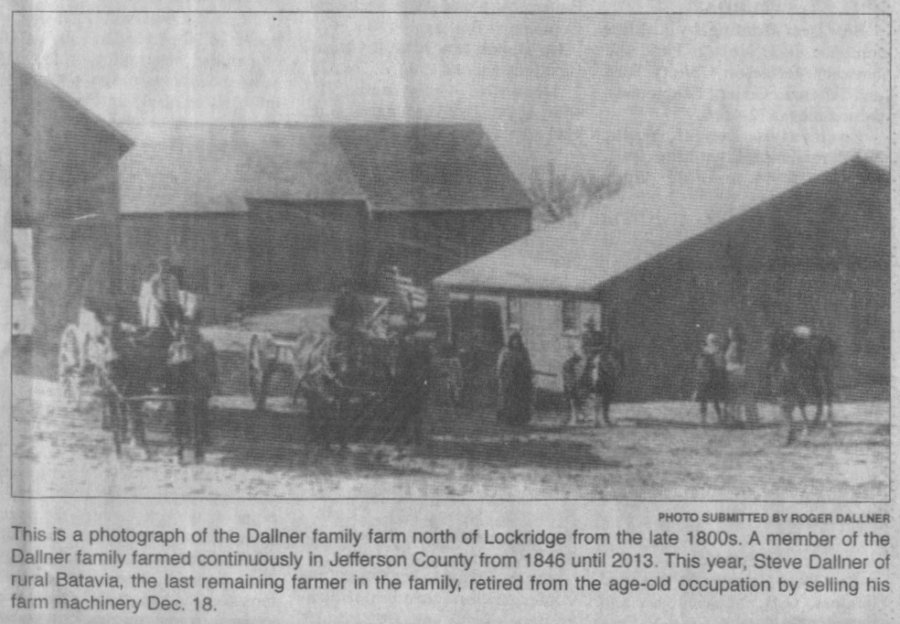