Fairfield resident Lee GOBBLE will turn 99 years old in less than two weeks and he is going to receive the largest birthday card of his life.

Several residents have decided to honor GOBBLE's longevity and service to the community by presenting him with a birthday card bearing the signatures of his friends and acquaintances. Suzan Kessel designed the birthday card, which features Fairfield landmarks such as the Jefferson County Courthouse clock tower, GOBBLE's former clothing store and a turkey.

GOBBLE turns 99 Dec. 15. His birthday card is in the atrium of the Fairfield Arts & Convention Center. Everyone is welcome to sign the card. It will be taken down at noon Wednesday. The Fairfield 1st Fridays Art Walk would be a perfect time to sign it.

The clock tower is significant to GOBBLE. It was built in 1893, when a peak steeple 36 feet tall stood on top of the clock tower. The steeple, featuring a slate roof, defined the character of the courthouse. Unfortunately, the steeple sustained heavy damage in 1948 during a violent wind storm. The county decided to remove the steeple rather than make the costly repairs.

In 1985, GOBBLE started the Jefferson County Restoration Fund to repair the steeple, including $500 of his own money. In 2004, the steeple was replaced.

GOBBLE was also a member of the inagural Parsons College Wall of Honor class in 2009. He attended the college from 1933 to 1937, at a time when roads in Iowa were being paved for the first time. Years later, he was awarded an honorary degree for special achievements by the Parsons College Foundation.

After college, GOBBLE worked full time in his family's clothing business where the ICON Gallery is now. Friend Dave Neff said the GOBBLEs had four floors of clothing and other merchandise such as sporting equipment.

"He always carried the newest and classiest stuff, especially for the Parsons College students," Neff said. "The fraternity boys liked to get dressed up."

GOBBLE owned 36 apartments in Fairfield, often renting to college students. He also often employed college students at his store. He had a soft spot for kids, too. Neff said GOBBLE drove a golf cart in the Kiwanis Kids' Day Parade that he decorated to look like a turkey, a play on his name. When GOBBLE placed ads in The Ledger, they always featured the face of a turkey and "GGG" for "gobble, gobble, gobble."

"He thinks the turkey should be our national bird instead of the eagle," Neff said.

GOBBLE spent a lot of time socializing with everyone he met at the Fairfield Golf & Country Club. Neff said he was eager to welcome Maharishi International University to Fairfield in 1974.

"He is pretty much Mr. Fairfield," Neff said.

In the linked photo below, Fairfield icon and retired businessman Lee GOBBLE received a large birthday card from Fairfield Mayor Ed Malloy during his recent birthday party. GOBBLE turned 99 Dec. 15. The card, made by Fairfield artist Suzan Bates Kessel, featured Fairfield landmarks with special meaning to GOBBLE, including the Jefferson County Courthouse clock tower. GOBBLE spearheaded the effort to replace the steeple on the tower. The steeple had been removed many years ago after being damaged in a violent wind storm in 1948. In 1985, GOBBLE started the Jefferson County Restoration Fund to repair the steeple, including $500 of his own money. In 2004, the steeple was replaced. 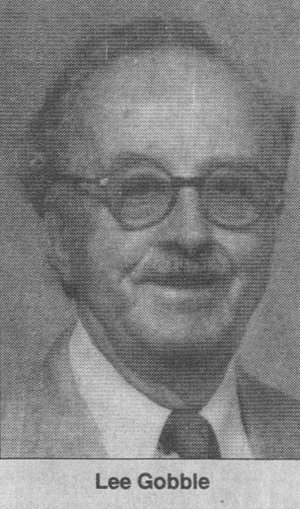