Genevieve DRISH of Fairfield will celebrate her 105th birthday Monday.

Mrs. DRISH will be celebrating her birthday with her three children, Leonard DRISH of Brighton and wife Mary Ann, Mary Ann CRAWFORD and husband Delbert of West Burlington and Alma Dean WELDING and husband George of Fort Madison.

According to the Iowa Department of Elder Affairs, Mrs. DRISH is Jefferson County's oldest-known resident. The title passed to her upon the death of Wilma Lawson in February.

After 105 years of living in Jefferson County, Genevieve DRISH still believes "there's no place like Iowa."

DRISH, the oldest known person residing in the county, lives independently at Wagon Wheel Senior Hoursing south of the square, where she has resided for 11 years. She likes watching sports, playing cards and dining weekdays at the Fairfield Senior Citizen Center with friends. She also enjoys visits from her three children, 17 grandchildren, 37 great-grandchildren and six great-great-grandchildren.

DRISH has come to love life in town, but will always be a country girl at heart. She has spent most of her life on a farm in Polishville, 12 miles northeast of Fairfield, where she grew up and later lived with her husband and children. She recalls milking cows everyday before school, and tending to chickens and a vegetable garden.

"I loved it in the country," she said, "it's just different."

When DRISH finished school, she worked as a telephone operator in the small town of East Pleasant Plain. She said she was 19 before she began dating.

"My dad was very strict, so I couldn't go out much," she said.

She met Frank DRISH when she was 19 at what she called a "house dance." She said it was common for neighbors to set up a wooden platform in the yard to host a party.

DRISH came from a German family who had immigrated before her parents were born, and her husband's parents came to Iowa from Poland.

"Frank's mother couldn't speak anything but Polish," she said.

DRISH said although Germanville and Polishville were neighboring townships (sic - towns, both in Walnut Township), the two nationalities "didn't like each other" because of the rivalry between the countries. But she said her parents liked Frank and approved of the match.

She and Frank married when she was 21 years old at St. Joseph church in East Pleasant Plain.

She and Frank started out as a couple during one of the most tumultuous times in American history. She can remember the Great Depression hitting Iowa one summer in the 1930s during their first years on the farm together.

"It was really hot and dry, just like this past summer," she said. "My husband started chopping down trees to feed leaves to the cows, because we had no hay and no grass. We didn't know where our next meal was coming from."

She said they had little money, but learned to be resourceful.

"The banks closed in Brighton, but we didn't have any money to lose," said DRISH with a laugh.

DRISH's daughter-in-law MaryAnn DRISH, married to her son Leonard, said the Depression taught her in-laws to be self-reliant at a young age.

"They grew 90 percent of what they ate," said MaryAnn DRISH. "Genevieve did a lot of canning, and made her own bread, noodles and pie, she is a very good cook."

She also said she sold her eggs and cream at the market to make extra money.

DRISH had all of her children at home. Her husband worked full time on the farm, and she worked at Universal Producing Company in Fairfield.

She and Frank DRISH were married 54 years until his death in 1984. She continued to live on the farm by herself until 2001. She continued to mow the lawn every day, and took daily walks to check on her son Leonard's cattle.

DRISH said it was hard to leave the farm, but is happy she did because of the community she found at the senior center and at Wagon Wheel.

"When you're among people, it makes a difference."

However, time has not tempered DRISH's self-reliant approach to life.

"I'm independent and I do what I want to do," she said with a smile. 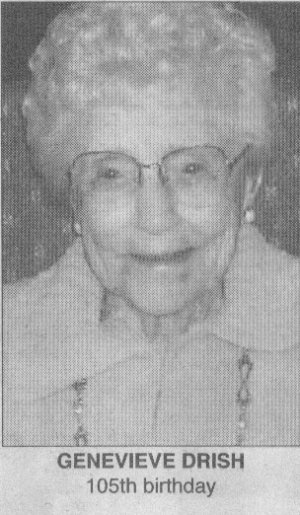