They say to be a successful antique shopper one must know how to spot hidden treasure, a skill Fairfield resdient Mike BURGGRAAF has been honing for years.

But BURGGRAAF is using his trained eye not only for antiques, but to re-imagine the glory days of a historic southeast Iowa building he found languishing in disrepair.

In an alleyway off of East Burlington Avenue, unsuspecting passersby are getting a taste of bygone Iowa charm where BURGGRAAF reconstructed a 1905 general storefront on the front of his garage.

BURGGRAAF described Troy as "a typical Iowa town that was thriving at the turn of the century, but then died out."

He said the store was still open at the beginning of 2011, and sold food and general supplies. But the owner was forced to close shop when a neighboring grain bin burst, destroying the back of the store.

The property was scheduled for demolition in April. Instead, BURGGRAAF bought the storefront and dismantled it board by board and brought it to his home in Fairfield.

He spent last summer studying the decaying surface in detail, matching the original paint colors with shreds on the wood panels, replicating detailing and copper trimming, and hand-cutting stencils for the "General Store" lettering.

BURGGRAAF completed the project last fall. He spent less than $500 in all, but many hours of his time.

"Everybody has their hobbies," said BURGGRAAF, "and this happens to be mine."

He and his wife, Cindi, see a future for the general store. When they retire they plan to renovate the inside and open an antique shop. In the meantime, BURGGRAAF is a restoration and construction worker, and co-authored the book, "The Antique Bottles of Iowa." He is currently restoring two historic homes in Bentonsport.

The couple said the storefront is getting interest from residents.

"A lot of people come through the alley and stop to talk to me about it," said BURGGRAAF. "It's been fun; it's been great, actually."

Perhaps the most rewarding visit for BURGGAAF was from the former storeowner's son.

Note: only one photo is allowed to be displayed on this page, but click on the link below the photo to see the 'before' photo of the storefront. 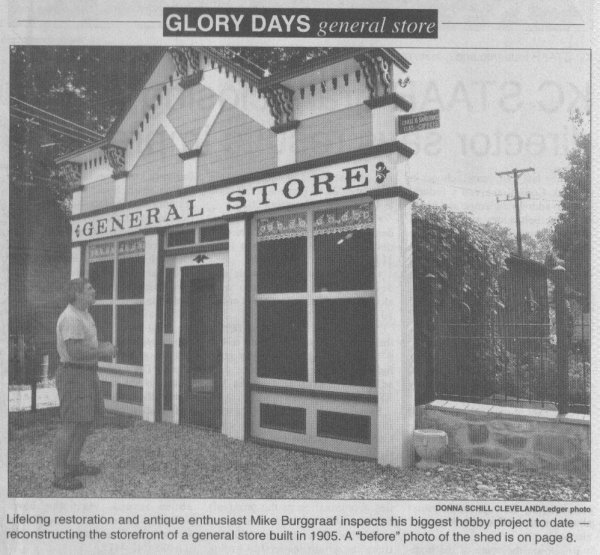 Photo of the storefront, before restoration