LIBERTYVILLE -- One hundred years ago, the RMS Titanic sank on April 14, the mayor of Tokyo presented 3,000 cherry blossom trees to Washington, D.C., on March 27 and Libertyville resident John REED was born on Jan. 8 in Fairfield.

"I grew up on the west side of Fairfield, on a farm," said REED. "I started school in one of Iowa's many one-room school houses, and yes they were heated with wood and coal -- there was no electricity service then."

Growing up on an Iowa farm, REED said he took up hunting, trapping and fishing, typical country living activities.

"I remember he worked as a taxi driver, a horse-drawn taxi," he said. "The taxis would go down Broadway, looking for fares, check the Rock Island train depot when trains arrived, and if no passengers needed a taxi, they'd cut across the [Central] park to get to the other depot."

Another distinct memory from 1929 is watching the original two-lane Highway 34 being built.

"I could watch them pouring that concrete, it was quite something," he said. "They were lucky if they made it a mile per day. It was a bid deal."

"I attended and graduated at the old high school that burned," he said.

He went to work for the Louden Machinery Company, accumulating 38 years before retirement. His employment there was paused twice. The first time was because at age 30, he voluntarily joined the military during World War II, and the second time was when Louden was sold and he didn't want to work for a new manager.

"I got hired as head of maintenance at Parsons College," he said.

But he eventually returned, and retired, from Louden.

"They were really good people to work for," he said. "Actually I kept working until age 90. I built inlets for field tile."

During World War II, REED enlisted in the Army Air Corp, the fore-runner of the Air Force.

"I worked in communications," he said. "I worked on the encryption machines that coded and un-coded messages. Do you know we cracked the Japanese codes before the war even began? And we cracked the German codes pretty quickly. They never cracked our codes, because we had the Navaho (sic) code makers."

"Those encryption machines had three to four characters for one letter. My job was to keep the machines working."

Maintaining the encryption machines was important for military intelligence. The machinery was all mechanical -- not digital or computerized -- nor even electronic.

REED served in Africa and Italy during the war. After the war ended in Europe, he was sent to "one of the Dakotas for further training to join the fight in the Pacific," he said. "But Japan's surrender came before I was shipped out. I had a brother who went through the whole thing."

REED returned to Iowa and his wife, Ella, more locally known as "Schmitty," a registered nurse.

"She worked in OB/GYN and probably delivered half the population of Jefferson County," said REED.

They settled in Birmingham while he returned to his job at Louden.

He and his wife both worked full-time jobs, then he'd farm after work and on weekends.

"Some days I'd be on the tractor until midnight," he said.

He now has a neighbor farm his land, and his cousins, Larry and Maryann EKLUND live with REED. His wife died more than five years ago.

He still owns two tractors; a 1950s and a 1964 John Deere. He never has used air conditioning or GPS to farm.

"If I didn't have the cash to pay for something, I didn't buy it," he said.

Which may explain why he can't recall any personal downside to the 1980s farms implosion.

"All those years I drove two-cylinder tractors with no hearing protection against the noise, and my hearing is fine," he chuckled.

At different times REED raised cattle or sheep, always planted corn and eventually beans. He never used genetically modified seeds. He now keeps his hands in the dirt with an annual garden.

"I like to plant a garden, but the deer out here like it, too. I've been trying to get some apple trees growing, and those also are deer favorites," he said.

His garden is three-fourths of an acre, and he said he grows "everything."

He tracks corn and bean prices and farmland prices.

REED enjoys creating in his woodworking shop and has built many pieces of furniture through the years for relatives. He built a custom TV-entertainment center, a kitchen hutch and other furniture used in his own house. He has built child-sized wooden tables and chairs, quilt racks, rocking chairs, side tables, dining room tables and desks.

He likes to play cards with friends and family members, and still likes to fish, but gave up hunting not long ago.

"I still have my own driver's license, but I prefer to have someone drive me," he said. "I don't go out too much."

REED shared a hunting story. He went duck hunting on the Des Moines River on Nov. 11, 1940. It became known as the Armistice Day Storm.

The Armistice Day Storm of 1940 is chronicled on several websites, including Ducks Unlimited. A warm, frostless autumn frustrated duck hunters who looked for a cold snap. But even the morning of Nov. 11 was balmy and 56 to 60 degrees in Iowa.

Many hunters took to the rivers and marshes because it was a holiday. And there, they witnessed a phenomenon; thousands of ducks began funneling into river valleys, flying just above water level. Shooting was excellent and hunters stayed, wanting to get as many as possible. A perfect storm was rolling in from the west; cold air from Canada collided with moisture from the Gulf of Mexico.

Some accounts from that day recall an orange sky. But the skies darkened, winds picked up and first, it rained. The storm became a full blizzard by noon.

Hunters who stayed until the 4 p.m. hunting time limit found themselves trapped on small islands, stranded in marshes or trying to return to river shores in duck boats, were swamped with water.

Some hunters stayed in place to wait for Nov. 12 daylight. Wind chill temperatures in the Upper Mississippi River Valley dropped to minus 55 degrees overnight. Many froze to death; some lost limbs to not just frostbite but also because the limbs froze.

"We were down at the Des Moines River and happened to be along a wide spot of the river, where there was a beach behind us," said REED. "I was out in the river. I waded over to the other bank to pick up one of the ducks I'd shot. The water was about 6 inches deep. I stayed on the other bank awhile, and then the wind came up. It came up very fast, fierce and cold.

"I waded back to my side of the river. I was wearing hip boots, and I got wet, with water sloshing over the top and inside my waders. The beach was covered in water. We had to climb straight up the bluff to get out of there quickly. At the top, I turned back and looked below. There was a wall of water coming down the river, about five feet high."

Cold and wet, REED made it home without injury.

Another story he recalls vividly is watching part of the procedure to move The Ledger's printing press across the street.

Where the current VFW stands, at Broadway and B Street, was a Plymouth dealership, he said. The printing press was in a basement behind the dealership.

"They tore the wall out and had to create a slope from the street, about 5 to 6 feet to the edge of the building and 4 more feet inside the building," he said.

"A friend and I took our lunch time to walk down and watch, then we had to return to work. After work, I went back. The press had been moved halfway down the alley. It finally went through a large whole (sic) inside The Ledger building.

"The Ledger building used to be the Rex theater," said REED. "It was only 10 cents, while the Orpheum [at North Second Street and Broadway Avenue] charged 25-cents."

REED's advice to living healthily past a century?

"Work hard. Keep busy. Take care of yourself." he said. "Don't just stop. I've seen people do that ... retire and stop doing. It kills them." 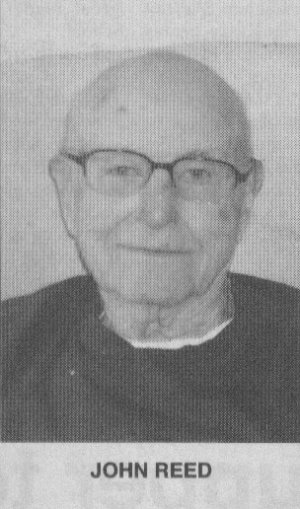