Jefferson County's oldest-known resident Wilma LAWSON died Monday at SunnyBrook Living Care Center where she had been a resident since 2004.

According to the Iowa Department of Elder Affairs, the title of the oldest-known county resident now passes to 104-year-old Genevieve DRISH of Fairfield.

DRISH, who was born in 1907, will be turning 105 in September and lives on her own at Wagon Wheel Apartments. She said both her eyesight and her hearing are not what they used to be, and although she is mobile, she does use a cane to get across the street to the Fairfield Senior Citizen Center because she is afraid she might fall.

In May 2010, DRISH was among a group of five centenarians who gathered at Sunnybrook Living Care Center to celebrate life by speaking about their experiences raising children, farming, working and more.

DRISH related a time she was learning to drive and kept killing the engine. She wanted to quit, but her husband told her if she didn't do it she never would. "So," she said with a chuckle, "I gunned it and got up the hill."

During the same gathering, LAWSON was asked about being nearly 103.

"It never dawned on me to set back and wonder about it," she had answered. "You just take it a step at a time."

LAWSON had said her life had been busy and full of adventures, and she also had memories of Fairfield. She and her late husband Vernon moved to town in 1929. They owned and operated the Fairfield Hotel and Restaurant, and they raised four sons.

"I've seen Fairfield grow," LAWSON had said, recalling that 12th Street used to be the west edge of town.

"I've seen changes from horse and buggies to cars with the roll down curtains for sides; horse-drawn plows to the first tractors; from walking to school, if you could go, to horse-drawn school buses. Airplanes -- I can remember the first one I saw," she had continued.

LAWSON celebrated her 97th birthday in 2004 decked out in a black leather vest and helmet for her first motorcycle ride aboard Stan McClellan's Harley Davidson -- an adventure she had been pondering for about two years.

Michelle Schafer, a spokeswoman for the Iowa Department of Elder Affairs, said it is possible a person older than DRISH could live in Jefferson County, who hasn't been placed on the department's registry, which is exactly what happened in June 2010 when the county's oldest-known resident, 104-year-old Sylvester B. "Vester" HEMM, died.

The department had DRISH listed as next in line for the title, but some local citizens, including Lisa Metcalf, knew LAWSON was older by a few months and planned to call the department of elder affairs and have the centenarian added to the list.

The department also receives information directly from centenarians or their families and from newspaper articles, she continued. Registry forms also are provided by the governor's office to people requesting congratulatory birthday messages.

Information about the registry is available by calling the Iowa Department of Elder Affairs in Des Moines at 515-725-3333.

HEMM was named Jefferson County's oldest-known resident upon the death of 104-year-old Myrtle CARMICHAEL in July 2007.

ENSMINGER had been the oldest-known Jefferson County resident since 101-year-old Frances HITE died Dec. 30, 2003. HITE had held the title for only a few weeks, since the previous oldest resident, 102-year-old Inez Mae GLOTFELTY died just days before on Dec. 18, 2003.

A funeral for LAWSON is set for 10 a.m. Friday at First United Methodist Church. Visitation will start at 4 p.m. Thursday, with family present from 5-7 p.m. at Behner Funeral Home & Crematory. The obituary was printed Tuesday in The Ledger. 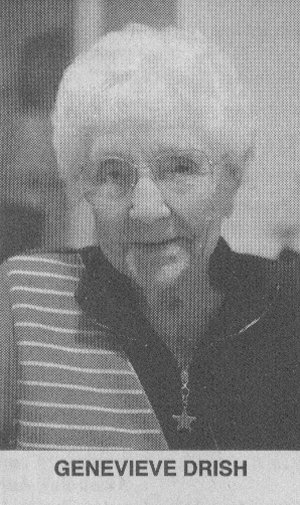