The days of one-room schoolhouses are gone but not forgotten.

In the case of Lockridge Victory No. 8 School, that's evidenced by the annual reunions that ensure its legacy lives on. The school, still standing 1.5 miles east of Four Corners, will celebrate its 120th anniversary Sept. 18.

Former students and teachers, as well as their families, will gather at 1:30 p.m. to share fond memories of the place that was once the center of their world.

"In those days -- in those years during the war and after the war -- you really didn't get out of your community much. Everything that happened, happened at the school or a church," explained Roberta MATTSON, who started her primer year at Victory school in 1941. "We were very close to each other. Even though we weren't related, we were like one big family."

She recalls social programs that drew the entire community. So many people would attend events raising money for books and supplies that the crowd would spill onto the lawn, where some would observe through the windows.

"Even if they didn't have children in school, they were interested in what was going on at the school," MATTSON said.

Of course, her family all completed their early education there -- everyone from her five siblings to her parents and their 19 siblings. MATTSON attended through eighth grade.

"Most of the time I was in a grade by myself," she recalled. Students of all ages shared the classroom, but probably never more than 12 at a time during her tenure.

"Everybody kind of helped everyone else. If the little ones needed help, some of the older ones helped out, especially if we had a lot of grades," MATTSON said. The older children's duties also extended to helping haul coal, wood and water.

Some children rode horses or bikes to school, but most, including MATTSON, walked. The 8:30 a.m. bell and five-minute warning bell insured they got there on time.

"It was important not to be tardy," MATTSON said.

Her father, who valued education because he hadn't been able to attend high school, even made sure she made it to school after a heavy snowfall. The school district didn't cancel classes because of a snowstorm back then, MATTSON explained.

"One special memory . . . I was probably in primer or first grade, and [the snow] was very deep. We didn't have snowplows out in the country -- everybody cleaned their own, so [my dad] put me on his shoulders, and he carried me to school. And he came back at 4 o'clock and got me because I wasn't going to miss school," MATTSON said.

One unusual feature of the Victory No. 8 schoolhouse was the late addition of a telephone. MATTSON said visitors are often surprised by its presence, but the phone was put in for emergencies.

"We had a big stove pipe that went up to a chimney, and it caught on fire around the chimney. They had to run to the nearest farm to get the word out that they needed help," MATTSON said.

Years after the Victory No. 8 School -- named by those victorious in carving out the district in the late 1800s -- closed in 1958, MATTSON took her fourth-grade Lockridge Elementary School students out to the schoolhouse for their unit on Iowa history.

The annual field trips continued for 27 years, giving another generation of students the opportunity to experience a day at country school. Her students participated in spelldowns and played Andy Over.

MATTSON's field trips helped ensure the schoolhouse remain intact (sic). When the land on which Victory No. 8 was sold in 1975, the real estate contract included a clause reserving the schoolhouse and roughly 0.8 acre of grounds as long as at least one community function occurs there annually.

The reunions also have served that purpose.

This year's 120th anniversary celebration will feature country school entertainment, including a play staged by three former students and music performed by Fiddlin' Granny. Homemade ice cream and drinks will be provided.

In the photo below, Lockridge Elementary School students paly a game of Andy Over during a visit in 1988 to the Victory No. 8 School near Lockridge. The school's 120th anniversary will be celebrated during a reunion Sept. 18.

Two more photos were included in the story, however only one is able to be displayed in this posting. The others can be accessed by clicking the links following the descriptions and will be displayed in your browser window; use your Back button to return to this page.

Second photo:
A Lockridge Elementary School fourth-grader does her lessons on a slate board during a visit in 1988 to the Victory No. 8 School near Lockridge. Another photo from the visit can be found on page 7. (sic - photo #3)

Third photo:
Living history -- Roberta MATTSON's fourth-grade class from Lockridge Elementary School took a step back in time in June of 1988 by having class at the one-room Victory No. 8 School north of Lockridge. The students sat in antique desks, wrote with chalk on slates and visited an outhouse. The old schoolhouse's 120th anniversary will be celebrated with a reunion Sept. 18. See the story on page 1. 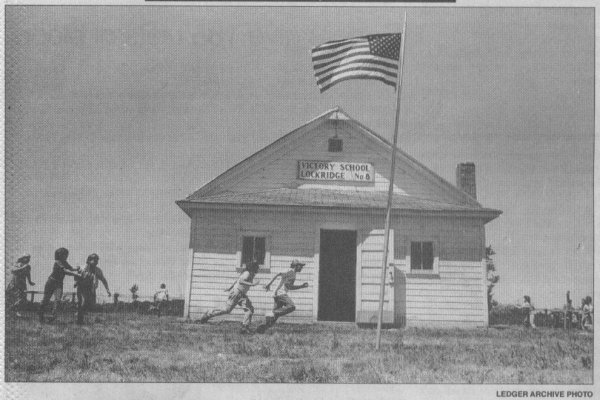