The nearly 200-year-old family Bible of the COOP family -- one of the pioneer families of Jefferson County -- was presented to the Carnegie Historical Museum Tuesday afternoon.

"Several months ago when I was in Fairfield, I visited your museum and saw that you had some items associated with my COOP ancestors -- William Greer COOP, his mother Christiana and his wife Nancy," said Kenneth L. COOP of Los Alamos, N.M.

COOP told museum director Mark Shafer he possessed William Greer COOP's Bible, which is considered the COOP family Bible, and he would like to place it somewhere in Jefferson County where all the COOPs and any other interested person could view it now and in the future.

Shafer and COOP made arrangements for COOP, on behalf of the entire COOP family, to present the Bible to the museum Tuesday afternoon.

The Bible belonged to William Greer COOP, who was born Feb. 26, 1805, in Virginia, the son of David and Christiana STOUFFER COOP. The family moved to Tennessee, Pennsylvania and then to Indiana. William Greer COOP married Nancy Ann HARRIS Aug. 16, 1829, and they moved to Illinois.

William Greer COOP served as a colonel of a regiment in the Blackhawk War, and, in 1832, was commissioned a major general. He served six consecutive terms as the elected sheriff in Macoupin County in Illinois.

In the spring of 1836, William and Nancy Ann, and three children set out for land beyond the Mississippi River in an ox-drawn wagon. His brother David, along with his wife and their two children also went west.

They arrived June 6 to stake their claims in what was then Des Moines County and, in 1839, became Jefferson County.

Five weeks later, July 13, 1836, William Henry COOP was born -- the first white child born in the area. Two women neighbors and a Native American Indian midwife attended his mother, and he was born in the covered wagon, with the wheels removed, where the family was living while William Greer built their house.

William Greer COOP's Bible was passed to his son Jefferson, then to Jefferson's daughter May COOP BILLINGSLEY.

Eventually, the Bible made its way to the family branch of William Greer COOP's son Ransom Lafayette COOP. May BILLINGSLEY wrote from Pasadena, Calif., in 1937 to Ransom's daughter Bertha COOP FLINSPACH that she could keep the Bible as long as she wanted, but "I should like for it to be left in the hands of a 'Coop.' ... Maybe it would be well to place it in the 'Jefferson County Society [a fore-runner of the Carnegie Historical Museum].' ...I prized it very highly. It is a quaint book, with all those names and dates of births. So, I hope you will cherish it, too."

Bertha FLINSPACH gave the Bible to her brother Albert COOP, who passed it on to his son Roy COOP, and Roy gave it to his son Kenneth L. COOP -- the great-great-grandson of William Greer COOP.

Today, per May's wish written 74 years ago, the historic family Bible has been placed in the local museum.

Shafer said the 1829 bible is "on an end table of the era, coupled with the other COOP memorabilia for a nice display."

In the photo below, which appeared on the front page:

Kenneth L. COOP holds the COOP family Bible in front of a portrait of his great-great-grandparents William Greer and Nancy Ann HARRIS COOP, one of the pioneer families of Jefferson County. Kenneth COOP, on behalf of the COOP family presented William's Bible to the Carnegie Historical Museum Tuesday. Kenneth COOP also said the dress in the display behind him was worn by one of his ancestors. 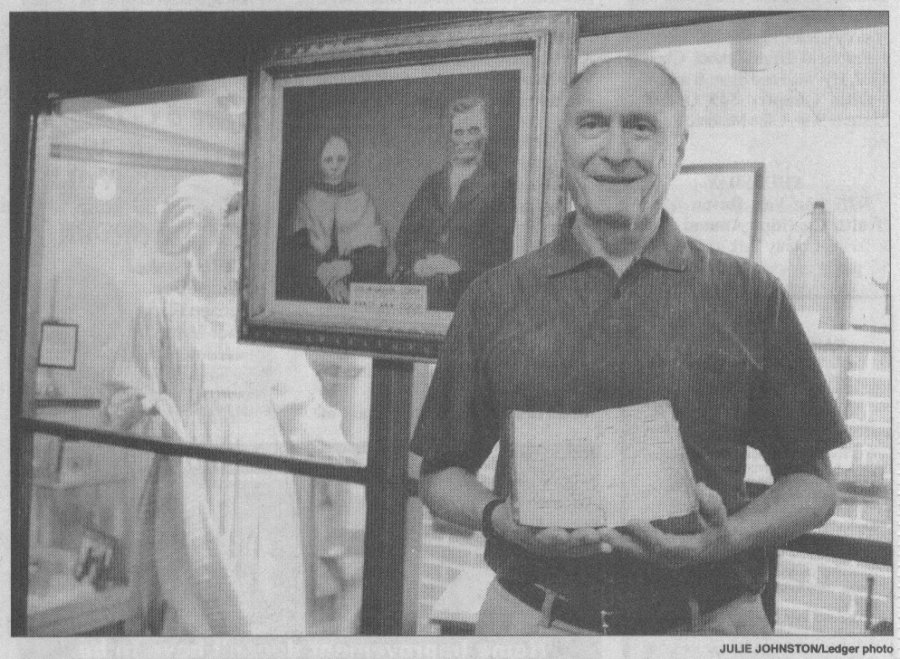