James B. NELSON, 300, E. Washington Ave., former rural mail carrier for 35 years and antique collector, owns perhaps the only bicycle made in Fairfield.

It is made of wood with a large front wheel and wasn't designed exactly for the comfort of the rider.

History of the old relic says it was made by Melchi SCOTT, blacksmith and frontiersman who came to Fairfield in 1860. It is believed the old bicycle was made about 1880.

SCOTT was born in the year 1800 in Green County, Pa. He came to Iowa, settled in Fairfield where he was known as an excellent workman and as a quiet citizen.

His blacksmith shop was located at the rear of what is now Danielson Motor Co. The bicycle was of his own design and for his own use. He died in 1884 at the age of 84.

The first bicycle, or velocipede, ever seen in Fairfield passed the Ledger office Monday morning in charge of a party of small boys. They had discovered it in the shop of the late Melchi SCOTT. It was constructed by that gentleman and his son Aaron SCOTT sometime in the '60s, and was the first wheel ever seen in Jefferson County, and probably the first in Iowa. It has wooden wheels with light iron tires, and in height is about midway between the old high wheels and the safeties of today. The SCOTTs were expert mechanics and their work is very creditable, when everything is considered.
This wheel was used in Fairfield for several years and pretty fair time was made on it. It is worthy of preservation as the work of an Iowa mechanic in the early days of the bicycle.

Note: James NELSON died in 1990 and is buried in Evergreen Cemetery, Fairfield. He was never married. Settlement of James' estate was handled by his brother, and the old bicycle was sold at auction with his collection of banks and toys. There was at one time a writeup of the estate sale at the Fairfield Library, but it has gone missing. Noted on the Family Group Sheet for Melchi SCOTT is the fact the wooden bicycle sold for $2200, and if memory serves it was purchased by someone in Nebraska. 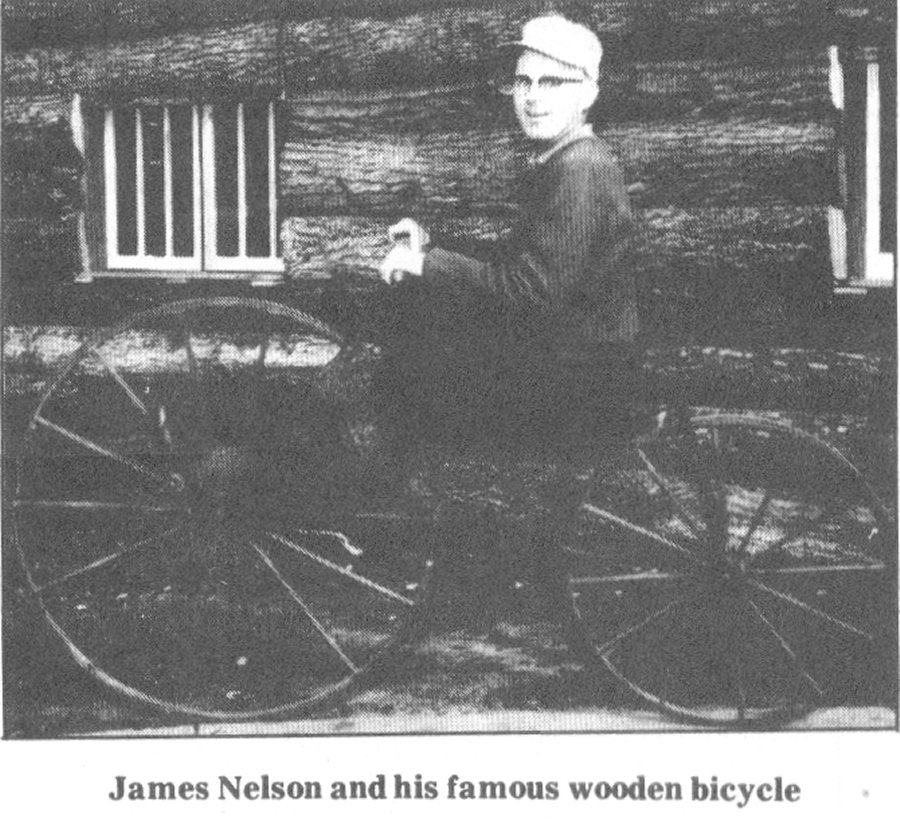