The Iowa Department of Elder Affairs may have one woman listed at the oldest known resident of Jefferson County (sic), but some local citizens say that title belongs to Wilma LAWSON who celebrated her 103rd birthday June 17.

After the death of Jefferson County's oldest known resident, 104-year-old Sylvester B. "Vester" HEMM Sunday evening at Parkview Care Center, a call to the state's department of elder affairs revealed Genevieve DRISH of Fairfield as the next oldest known county resident. DRISH will turn 103 years old in September.

Michelle Schafer, a spokeswoman for the department, explained naming the oldest person in a county can be tricky, which is why they stress the title as "oldest known." She had said Monday it was possible a person older than DRISH could live in Jefferson County, who hadn't been placed on the department's registry of centenarians.

Lisa Metcalf, activities director at SunnyBrook Living Care Center, where LAWSON resides, knew LAWSON was older than DRISH. She said Monday afternoon that she planned to call the department of elder affairs and have LAWSON added to the list.

During a gathering of five local centenarians in May at SunnyBrook Living Care Center, LAWSON was asked about being nearly 103.

"It never dawned on me to set back and wonder about it," she answered. "You just take it a step at a time."

LAWSON has said her life has been busy and full of adventures.

She recalled sliding down a 200-foot drop in an Austrian salt mine while visiting one of her sons stationed with the military in Germany.

"I got to see the Wall ...," she recalled. "When I think back, it was a privilege to travel and see those things. There's a lot of memories from that trip."

LAWSON also has memories of Fairfield. She and her late husband Vernon moved to town in 1929. They owned and operated the Fairfield Hotel and Restaurant, and they raised four sons.

"I've seen changes from horse and buggies to cars with the roll down curtains for sides; horse-drawn plows to the first tractors; from walking to school, if you could go, to horse-drawn school buses. Airplanes -- I can remeber the first one I saw," she continued.

LAWSON celebrated her 97th birthday in 2004 decked out in a black leather vest and helmet for her first motorcycle ride aboard Stan McClellan's Harley Davidson -- an adventure she had been pondering for about two years.

The department also receives information directly from centenarians or their families and from newspaper articles. Registry forms also are provided by the governor's office to people requesting congratulatory birthday messages.

Information about the registry is available by calling the Iowa Department of Elder Affairs in Des Moines at (515) 725-3333. 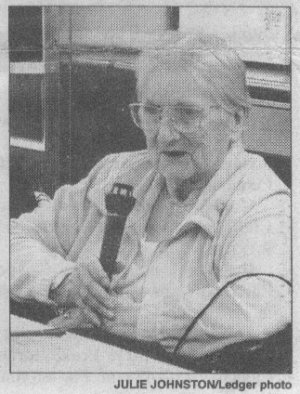