Genevieve DRISH the oldest now, or is she?

Jefferson County's oldest known resident, 104-year-old Sylvester B. "Vester" HEMM died Sunday evening at Parkview Care Center, where he had been a resident since September 2008.

According to the Iowa Department of Elder Affairs, the title of the oldest known county resident now passes to Genevieve DRISH of Fairfield, who was born in 1907. She will turn 103 in September.

In May, DRISH was among a group of five centenarians who gathered at Sunnybrook Living Care Center to celebrate life by speaking about their experiences raising children, farming, working, running a business and driving.

DRISH related a time she was learning to drive and kept killing the engine. She wanted to quit but her husband told her if she didn't do it she never would. "So," she said with a chuckle, "I gunned it and got up the hill."

HEMM, a long-time resident of Douds, farmed, worked in the Strother Mine underground shaft and also helped load coal trucks, hunted, fished and gardened while rearing six children and a grandson he and his wife had taken into their home as a baby.

In May 2005, after HEMM fell and broke his leg, he moved into Nelson Nursing Home where his youngest daughter Sandy KELLY was a certified medication aide. He moved to Parkview when Nelson's closed at the end of September in 2008.

HEMM was named Jefferson County's oldest known resident upon the death of 104-year-old Myrtle CARMICHAEL in July 2007 at Nelson Nursing Home where she had been a resident since December 2004.

ENSMINGER had been the oldest known Jefferson County resident since 101-year-old Frances HITE died Dec. 30, 2003. HITE had held the title for only a few weeks, since the previous oldest resident, 102-year-old Inez Mae GLOTFELTY died just days before on Dec. 18, 2003.

Michelle Schafer, a spokeswoman for the Iowa Department of Elder Affairs, said it is possible a person older than DRISH could live in Jefferson County, who hasn't been placed on the department's registry.

The department also receives information directly from centenarians or their families and from newspaper articles. Registry forms also are provided by the governor's office to people requesting congratulatory birthday messages.

Information about the registry is available by calling the Iowa Department of Elder Affairs in Des Moines at (515) 725-3333.

The funeral arrangements for HEMM are in the care of Pedrick Funeral Home in Douds. 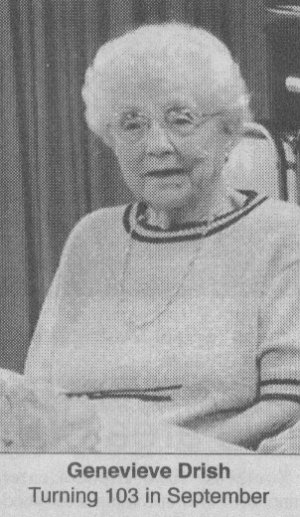