(Posted here with her kind permission... thanks, Verda!)
-------
Little did I realize when I ventured out in the fresh 4-inch snow in February 1973 to attend an evening meeting in Fairfield, it was about to change my life forever.

I became one of 52 charter members of the newly formed Jefferson County Genealogical Society, and my volunteer life began.

The group became involved with copying onto 3-inch by 5-inch cards early death, birth and marriage records from the courthouse. This was for the time period 1880 to 1899. Alphabetizing the cards and typing began. Copy services were not available "back then," and I wore out my old manual Smith Corona typewriter. Using special carbon, I was able to make five legible copies in the Fairfield Public Library with copies in three other libraries in Iowa, and I have my own here at home.

With those early years finished, the next projects were with copying the marriages up through 1959, births through 1929 and deaths through 1939; in typing them, I wore out three electric typewriters, switched to an Apple IIe computer and wore out three Apple printers. I finally had to abandon the working computer.

Backing up to October of 1974, the Latter Day Saints arrived to microfilm our county records. After finishing courthouse data from 1839 to about 1910, they moved to the Fairfield Public Library, and area residents were encouraged to bring in old family Bibles, old school house records, published family books, and a few churches cooperated with bringing in their oldest church membership and baptism/marriage records. I volunteered to set with the fella doing the filming and was the local contact with the public, so I packed my lunch and stayed the whole day. He survived with two 2-liter bottles of Pepsi and no lunch or supper hour breaks.

In 1976, while I was serving as president of the group, our corresponding secretary moved to Texas, and I answered my first query wanting an old 1878 obituary from the newspaper. It seems like it was just yesterday when I printed off the microfilm the account of the farm wife near Abingdon having been murdered by her husband in their kitchen with a hatchet. Two days later he was sent to the mental health institution in Mount Pleasant and years later buried beside her. It is now 34 years later, and I have helped 4,607 researchers.

Starting in 1977 and 1978, I was the corresponding secretary, and, with several breaks in the next 33 years, I have continued answering queries. Research back then involved reading a lot of 1850, 1856 and 1860 census records, piecing together families and digging into cemetery records. There were but nine volumes of cemetery records compiled for this county, and they were hidden away from the public on the bottom shelf in the office at the library. I just sat down on the carpet and would (sic) through all nine indexed volumes hunting the family in interest. The only other books available to research were some of our early county histories. Our collection has grown to three tiers and four lateral drawers.

Soon, researchers wrote back wanting wills and probates and naturalizations from the courthouse, so that opened up a new area of research. There were the "juicy" divorces to dig into down the narrow spiral staircase in the basement area. They could become quite details (sic), and reasons for divorcing so wide and varied. All the ones I looked up were mostly prior to 1920, but it was certainly an education in itself. Next, I typed indexes to all the wills, probates and naturalizations, which helped my digging, and another member typed index to divorces 1839-1939.

Now you may wonder where researchers got my name and address. I was listed in the Iowa Genealogical Society quarterly, and I advertised in the "Genealogical Helper" magazine. The chamber of commerce shared my name, and the library and courthouse shared letters. This was all snail mail. The most customers I had was 332 in 2000, and I kept my rural mail box busy. Everyone wrote three or four times before they got everything they wanted on their family.

What did I charge? The first few years I asked for donations for my time, but after receiving just 5-10 cent postcards for two hours time and handwriting data, I decided to charge $5 an hour. Many years later I went up to $7.50, andd the last few years it was $10 an hour. I have helped several lawyers, including when Vilsack was in Mount Pleasant. I did considerable research for a woman in New York and could not prove what she watned. She finally came herself, hit a dead end and I asked her what she charged -- $150 per hour, and she told me I certainly did not charge enough. My biggest thrill was being able to put three or four people in contact with each other, all descended from the same early settler here. Most everyone was happy to share any family data, and our library has more than 10,000 family sheets, most prior to 1900, and 293 family books or folders. Keep in mind, many of those early settlers left here and moved on to Kansas, Nebraska and on out to Oregon on wagon trains.

My customers' residences were so wide and varied. Some recollected were from Amman Jordan, London, a prisoner in Alaska, Australia, New Zealand and Sweden, as well as every state except Rhode Island, Connecticut, New Hampshire and Vermont. The one last year in Sweden had very distant kin who came to this area and are in Evergreen Cemetery. I never charged him because he lived about 45 minutes from where my own grandma came from in Sweden, and he did research for me for several more generations back. He and his wife recently celebrate their 51st anniversary, so they are our age, and we keep in contact. The woman in Australia keeps in contact too, not related, but just "checking up on me."

We have quite a mix of origins of our early settlers. The list includes the early Quakers in the Pleasant Plain area, the Polish, the Germans, the French, settlers from old neighborhood in Adair County, Kentucky; Abingdon, Va.; Sangamon County, Illinois; and Wooster, Ohio, as well as those hopping over from Indiana and Pennsylvania. I seldom had requests from anyone in Iowa and encouraged local resident to do their own digging here at the courthouse and library, as I had all I could handle.

Cemeteries: I have been in all but one. By 1985, I had become quite discouraged with the conditions of the cemeteries. They would get cleaned up, but the trustees would make no follow-up to keep them nice, and within four years the brush and multi-flora roses would take over. The county supervisors surely got tired of my complaints throughout the years. There is but one employee still in the courthouse that was there when I began my research and none left at the Fairfield Public Library -- makes me feel ancient! The last time I visited a supervisors meeting was in 2004 when I wanted help setting the 41 markers locating older cemeteries, many abandoned. The county engineer was most cooperative, and county employees installed them that summer. The signs cost our genealogical society about $1,100, but it was well worth it.

It was time for me to update all the inscriptions in 77 cemeteries. Some dated back to 1958, so they were getting obsolete. All 77 of those cemeteries were combined into one big index bound in bright gold on the library shelf through 1990.

My next goal was to get the big Evergreen Cemetery published. It took about four years to get it printable after walking it with helpers. I look back now and wonder how I ever got it published on my old Apple IIe computer without losing track of any of the 10,000 burials. Each computer floppy disc would only hold 1,200 names in lot order, then getting them all alphabetized now boggles my mind. I would not print with just the year born and died, but wanted the whole dates. This involved a lot of courthouse research too, but I finally made it, and it is bound to match the 77 cemeteries book.

Why did I enjoy it so much? I had no ancestors either Swedes or Germans in the United States until after the Civil War. I have such a memory for names in this county, it really surprises me. I have given so many programs throughout the years; one of the last one was to the Women's Club when I appeared as Mrs. Peter Cassel, the Swedish immigrant coming to New Sweden in 1845. It was fun meeting a bus load of Swedes touring this area, only to learn half of them spoke no English.

I met so many [people] researching at the library and am happy to help them, even though it often meant I went home without solving my own research that day. The most ever was nine in one afternoon and quite by accident met the woman from California who requested the hatchet murder.

It has been quite the ride, but you can see it was fun. It was a nice break from riding the tractor in the spring and fall seasons, helping sort cattle or hogs, working still at a one day per week bookkeeping job and keep my huge farm yard mowed and trimmed. I continue working quietly behind the scenes, clipping obituaries every day. I retired from climbing the old aluminum ladder to get down probate records in hard to handle metal boxes at the courthouse or lug heavy books up from the basement to a copy machine, or answer any more research questions.

Fast forward to how the internet has changed research. At the bottom of this article is our Jefferson County Web site, which started around 2002. The local webmaster retired last year, and his replacement lives in West Salem, Wis. In the last six months, I have furnished her with cemetery data up to 2005, and she puts our Ledger obituaries through December of 2009. Last month, she uploaded pictures of our genealogy section a the library for out of town researchers. There are pictures of gravestones from all throughout the USA on the Find A Grave site, and it is growing by leaps and bounds nationwide.

I certainly appreciate the cooperation I have had with the Ledger during these many years in publishing my former "Family Roots" column, also when I wrote the "Out of the Past" column.

To view the genealogy Web site, go to www.iagenweb.org/jefferson.

[Ed. note: minor correction with the county web address -- http://iagenweb.org/jefferson/ . Although Verda has retired, a Research Assistant has taken her place. Contact links are found on the county website.]

In the picture below, Verda Baird flips through a binder of data in the Jefferson County Courthouse. All around her are books and files of information she could use for genealogy research. 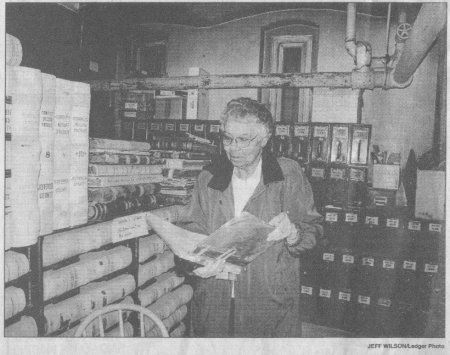