FORT MADISON -- A very select group of men, who along with Jacob WILEY of Jefferson County, comprise the only documented Revolutionary War veterans buried in Iowa.

On Aug. 8, that group officially increased to 40 in number when Ebenezer AYRES, who was born in 1761 in Connecticut, was honored at a ceremony near Fort Madison.

AYRES at the age of 19 served during the Revolutionary War in Capt. Reuben Scofield's company of the 9th Connecticut Militia.

The discovery and documentation began about 15 months ago. At that time Mike Rowley, then-president of the Iowa Society of the Sons of the American Revolution received a call from Barbara MacLeish a researcher living in Minnesota.

"We might have another Revolutionary War Veteran buried in Iowa that no one knows about" was her message.

MacLeish and Rowley had previously worked together on a project to honor Cato MEAD, the only known African American Revolutionary War veteran buried west of the Mississippi River.

Through MacLeish's tireless research, help from Georgia STANLEY of California, who is a direct descendant of Ebenezer AYRES, and researchers Maureen Mead and Barbara Kaye of Fairfield County, Conn,. and a little luck she was able to put it all together.

Rowley noted, "It was likely a once in a lifetime discovery. I am not aware of any other discovery in Iowa in my 51 years."

The name of Ebenezer AYRES will be added to the monument on the State Capital grounds in Des Moines in October.

All graveside photographs and more information of all Revolutionary War veterans buried in Iowa can be found on the Web site at www.iowasar.org.

Picture caption: Dean Swearingen, left, of the Iowa Society of the Sons of the American Revolution and Mike Rowley of the Central Iowa Chapter SAR Color Guard at the Hickory Grove Cemetery near Fort Madison during a ceremony honoring Ebenezer AYRES, one of only 40 documented Revolutionary War veterans buried in Iowa.

For further information, see the IAGenWeb site for Lee County. 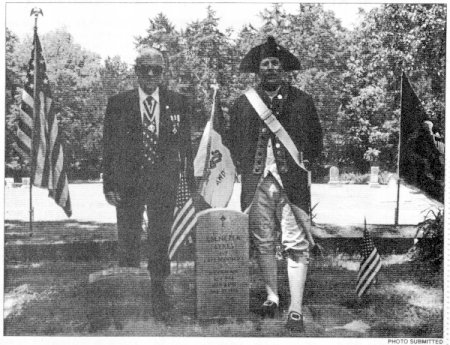