Earl COFFIN may have given up farming nearly 25 years ago, but he still has a sizeable garden to keep him busy.

At 99 years old, the only thing that prevents him from tending to his many fruits and vegetables -- many meaning cucumber, zucchini, squash, turnips, lettuce, potatoes, beats (sic), carrots, onions, tomatoes, green beans, cantaloupe and watermelon -- is the rain.

After a lifetime as a farmer, he gets out to his garden when he can, and his daughter Mary COFFIN said he's meticulous about keeping it weed free.

COFFIN graduated from Pleasant Plain Consolidated School in 1927. Following graduation, he worked on a farm for two years and then attended business college in Fort Madison for one year, but quickly returned to farming.

"I thought I wanted to be inside, but when it came down do it (sic), I wanted to be out in the open, so I went back to work on the farm," COFFIN said.

"I've always thought that it was unusual for a farm boy to go to college back in the '30s, and I always tell everyone that he has instilled a love of education in me and my son," his daughter added.

A Jefferson County native, COFFIN farmed 8 miles northwest of Fairfield, where he had roughly 280 acres of land and livestock, including cattle, hogs and enough chickens at one point to gather 30 dozen eggs a day.

Some of the biggest changes COFFIN has witnessed were the transition from horses to tractors in the field and the installation of rural water lines. He also noted the size of farms has grown, and rural residents have fewer neighbors.

When COFFIN wasn't working on his own farm, he kept busy by helping out neighbors. He attributes an active lifestyle to his longevity. COFFIN said he's always worked hard and tried to take care of himself while staying away from alcohol, tobacco and, for the most part, coffee.

He still enjoys hunting and fishing when he can.

"I'll tell you what a doctor told me one time. I went pheasant hunting. I was about 65, and he says, 'Earl, you go to town and sit down on your butt, you won't last two years.' He says, 'You keep busy and active because you've been that way all your life,'" Earl recalled.

So when he, at 75, and his second wife Frances BEGGS -- his first wife Genevieve BAKER passed away in 1982 -- moved into town they stayed busy by helping others.

COFFIN continues to help out at the Fairfield Senior Center, where

(continued at this point on Page 3)

he cleans trays and prepares silverware for the dishwasher.

A converted Catholic -- COFFIN was raised as a Quaker -- COFFIN also regularly attends St. Mary Catholic Church, where he was a charter member of Knights of Columbus.

COFFIN also still has a current driver's license -- with no restrictions, he said proudly -- although he's not sure he'll renew it next month when he turns 100. He drives himself to the senior center and church and to complete other small errands.

But, he said, "the way traffic is nowadays you're not safe on the road." 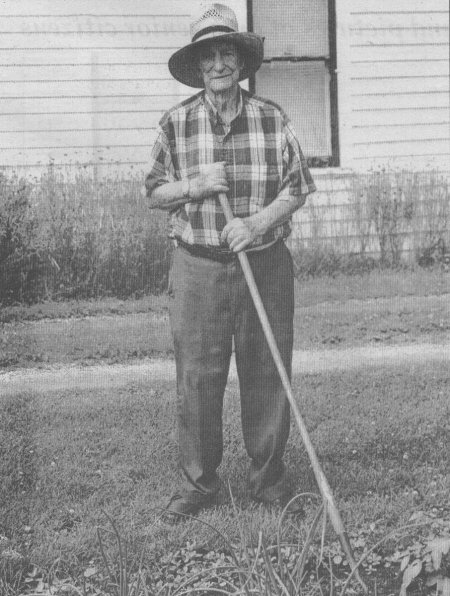