The Rhutasel Farm, located just east of Chapin, was purchased by Nicholas Rhutasel in 1872.

Nicholas J. Rhutasel was born in Bavaria, Germany on February 15, 1850. He came to the United States with his parents when two years of age, and lived in Chicago for about two years. Then he moved with his parents to a farm near Aurora, Illinois.

At the age of twenty-two he took an option on some land located somewhere southwest of "old" Chapin. When he went to look at it, he discovered it was all under water, so naturally he wasn't interested in purchasing. While staying at the hotel, probably the Ross Inn, at Chapin, he met a land agent who told him of a farm which was for sale, two miles east near the newly laid railroad.

Finding it to his satisfaction, he purchased it on June 17, 1872. The purchase was recorded on June 20, 1872. The abstract on the farm shows that on December 7, 1855 the United States Government shows a transfer to Simeon Cummings who then transferred it to William Deering on October 15, 1866. William Deering was the land agent who sold it to Mr. Rhutasel, for $12.50 an acre and the farm has been in the Rhutasel family ever since.

Following the purchase of this land, Mr. Rhutasel went back to Aurora, and on March 5, 1873, was married to Miss Emma A. Sheldon of that place.

They came to this farm site and built their home there. In an old paper, found by her grandson, A.J. Rhutasel, Mason City, Iowa, Mrs. Rhutasel had written that they had come to Chapin in 1873 and built the first house here on the west 80 of the farm. Their son, Almar L. Rhutasel, and his two sons, Clarence and A.J. Rhutasel, were all born in this house, although the south part of the house has been added on to it. The house still stands there.

On September 22, 1875, a son, Almar L. Rhutasel, was born. He grew to manhood and on June 8, 1904 he married Emma A. Schaefer. To this union two sons were born. They were A.J. Rhutasel and Clarence Rhutasel.

Clarence lived on the farm all his life, staying after the passing of his parents. In 1969 Clarence passed away, but the farm is still owned by his brother, A.J. Rhutasel, Mason City.

Nicholas Rhutasel lived in this community for over fifty years and was well known over the county, having been a stock buyer in earlier days. He also held many offices of public trust. The first being elected as township trustee in the very first township election in 1879. He also served as Justice of the Peace in Chapin for fifteen years. One section of Chapin is named the Rhutasel Addition, after Mr. Rhutasel.

Almar Rhutasel followed in his father's footsteps as being in the stock business. Part of his business was the buying and selling of horses. 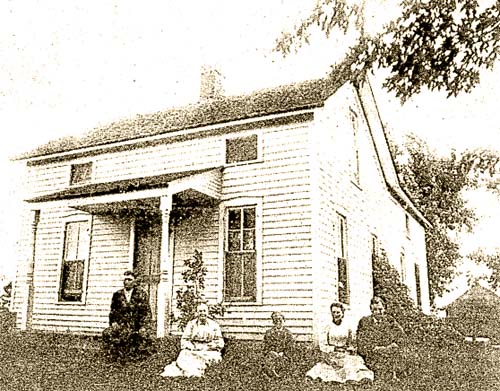