Memorial services for Alice Springer will be held at 11:00 a.m. Thursday at the Hauser Funeral Home in Charles City. The Rev. John Bates, pastor of Eden Presbyterian Church, will officiate. Burial will be at a later date in Oakwood Cemetery, Floyd.

The family will greet friends at the Hauser Funeral Home an hour prior to the service.

Alice Catherine Waddell Springer was born May 8, 1907 at Gifford, the daughter of Alfred and Minnie (Wentworth) Waddell. She attended school at Marshalltown. On February 23, 1928, she was united in marriage to Clarence Springer at Kane County, Illinois. They farmed west of Floyd for many years. Shortly after Clarence died in 1964 Alice moved to Charles City. Alice then worked as a care giver for numerous families.

She was a member of the Eden Presbyterian Church, Royal Neighbors at Floyd and the Charles City Womens Club. Her hobbies included flower and vegetable gardening.

She was preceded in death by her parents; husband: a great grandson, Zachariah Payne; three brothers; and a sister. 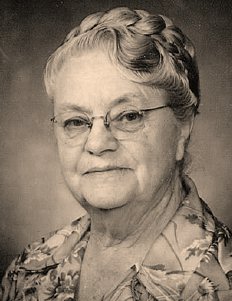